America’s largest motorcycle company and its most successful manufacturer of electric motorcycles are going head-to-head with a pair of battery-powered street bikes.

Harley-Davidson has begun selling its dynamic new LiveWire, the Milwaukee-based giant’s first battery bike, and the first in a coming line of many such two-wheelers.

Zero Motorcycles has started deliveries of the Zero SR/F, the fastest and most powerful electric machine yet from the 13-year-old Scotts Valley, Calif., company.

I rode both and came away surprised by which bike I preferred.

Harley-Davidson unveiled its battery-electric LiveWire in 2014 to a disbelieving motorcycle audience. Critics and hard-core Harley riders scoffed, and many believed the bike would never come to market.

But last year, company President and Chief Executive Matt Levatich, struggling to correct a downward stock slide and eroding market share, made the LiveWire and other electric motorcycles the centerpiece of a bold initiative to revitalize the venerable company.

Not only would LiveWire hit dealerships this fall, the executive said, but it would be followed by a wave of what Levatich called “lightweight, urban” transportation products that are designed specifically to appeal to “young adults, globally, living in dense urban spaces.”

The LiveWire, it turns out, delivers more than promised — or at least more than I expected. Having ridden the prototype in 2014, and having never been a fan of Harley-Davidson’s other motorcycles, I thought the production LiveWire would be stodgy and dull. At best, I thought, it would be capable of dramatic straight-line acceleration — it is a battery-powered machine, after all, and that is what they do best — but would disappoint in handling, braking, comfort and overall character.

I couldn’t have been more wrong.

On a half-day ride up and down San Gabriel Canyon Road in Azusa, I found the electric bike electrifying. It handled well, took corners at speed, responded with precision to braking inputs, and offered ergonomics comfortable enough that after a couple of hours on the bike, I was ready and even eager for more.

The LiveWire’s powertrain creates 105 horsepower and 86 pound-feet of torque, from a motor that is spun by a 15.5-kWh lithium-ion battery. It has a top speed of 110 miles per hour, and can get from zero to 60 miles per hour, the company boasts, in three seconds.

All that battery power means weight. The LiveWire tips the scales at 549 pounds, but that number is made manageable by the low, 30-inch seat height, which allows the rider’s feet to be firmly planted on the ground.

It is fitted not only with ABS but with cornering ABS — a feature that calculates the lean angle of the bike when determining how much braking power to put to the rear wheel. Cornering traction control does the same under acceleration. Braking systems are supplied by Brembo. Suspension at both ends is by Showa. 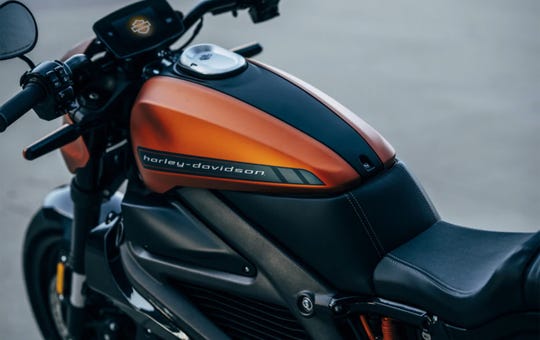 Range with electric bikes is often the sticking point. The LiveWire’s presenters say their bike can go up to 146 miles in around-town riding, and 95 miles of combined city and freeway riding. During my hours on the bike, watching the range indicator on the 4.3-inch touchscreen fall, I reckoned those figures to be good estimates.

But the LiveWire is also set up for fast charging — unusual in the electric bike world. Harley says that will allow for zero-to-80% charging in only 40 minutes. On a regular charging system, the bike accrues 13 miles of range for every hour of charging, the company says.

I wasn’t crazy about everything. The seat is too hard for long-distance riding — which the battery range would prevent, anyway. The mirrors are among the worst I’ve ever encountered and would need replacing at once. Overall, though, having had low expectations, I ended my ride very impressed.

Feeling cheeky, I had ridden to the Harley event on a Zero SR/F. The company’s new flagship bike, its builders promised, was its “most innovative, intelligent and powerful” ever.

Those claims are all true. Featuring a comfortable riding posture somewhere in between the upright position of an adventure bike and the crouched position of a sport bike, the SR/F is propelled by Zero’s new ZF75-10 motor and a 14.4 kWh lithium-ion battery.

That combination delivers 110 horsepower and 140 pound-feet of torque, Zero says, on a package that weighs 485 pounds. Capable of a top speed of 126 miles per hour, and a zero-to-60 rate of a startling 1.57 seconds, as tested by Cycle World, the SR/F is said to deliver up to 200 miles of range in city riding (on bikes equipped with the optional Power Tank battery storage).

Driving modes allow the operator to choose how much juice to send to the rear wheel. Power management comes via Bosch electronics. Brakes are by J. Juan. Suspension is by Showa. Seat height is a good 31 inches.

But the SR/F has issues. The brakes are somewhat unresponsive. (Does the rear brake work at all? If you stand on it.) I had trouble finding suspension settings that weren’t too stiff for anything but the race track. Though I liked the feel of the Pirelli Diablo Corsa III tires, feedback from the front end was less than desired.

But this is still the first Zero that, for many potential customers, will feel like a real motorcycle — not a good electric motorcycle, but a good motorcycle, period. It’s fast, sleek and good-looking, and handles well. On a race track it would be a blast.

Like their Silicon Valley neighbors at Tesla, Zero has pushed the envelope on electric battery technology, and through the years have built better and better vehicles — each model seemingly faster, more intelligently designed, easier to ride and with longer range than its predecessors.

I’ve also long been a Harley-doubter. With the exception of Ural, a Russian motorcycle company born during World War II and determined to stay there, it’s hard to think of a bike brand that has brought less innovation to motorcycling, and to an audience less likely to welcome it.

As a result, going in, I thought the choice would be obvious. The Zero machine is lighter, quicker, faster, offers greater range and is cheaper — a lot cheaper. The LiveWire starts at $29,799, and the Zero at $19,495.

But guess what? In many ways, I preferred the LiveWire to the SR/F.