The shift in pricing means automakers are relying on certified pre-owned vehicles as their entry-level options for consumers, analysts say

Detroit — Barbara Ceravolo wants a new truck, but she's not 100% certain that she'll actually buy "new." It depends on the price of buying or leasing a new vehicle versus buying used.

"I don't think there's that much difference in the vehicle itself," the Warren resident said while checking out used Chevy Silverados at Matthews-Hargreaves Chevrolet in Royal Oak recently. 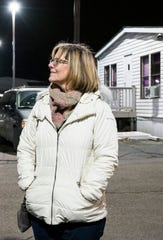 Barbara Ceravolo of Warren was looking to replace her current truck with a newer pre-owned vehicle while shopping at the Matthews-Hargreaves Chevrolet in Royal Oak recently. (Photo: Brooke Brzoska-Ogorek, Special to Detroit News)

She's not alone in thinking maybe a late-model used car or truck is a better option because it's less expensive and not much of a downgrade from a brand-new model. Analysts say affordability will continue to be as much an issue this year as it was in 2019 when the average transaction price for a new vehicle reached a record $37,183, which will continue to push consumers to consider used over new.

"Prices are shooting up because shoppers are opting for pricey SUVs and trucks packed with more high-tech options than ever before,” said Jessica Caldwell, executive director of industry insights for Edmunds.com Inc., an auto information website. “These increased costs, combined with the discontinuation of more-affordable options like domestic passenger cars, could prompt shoppers to shift their focus to the used market — or delay their purchase altogether.”

Cox Automotive analysts say used vehicle sales hit 39.7 million in 2019, up 300,000 from 2018. That's more than double the 17 million new vehicles sold last year, according to Kelley Blue Book, a Cox Automotive auto research company. Dealerships sold about half of the used cars and trucks last year —  about 20 million. That would be up about 500,000 year-over-year.

In 2020, Cox analysts expect the overall number of used-vehicle sales to drop to 39.4 million, with dealers commanding an even larger proportion. They expect dealers to sell about 20.3 million.

Used sales have been steadily increasing since 2013. Analysts attribute the increase to the uptick in pricing for new cars and trucks, and an increase in the supply of more late-model offerings.

"We had a couple years of lighter growth in the early part of the expansion," said Jonathan Smoke, chief economist for Cox Automotive. "It’s really been since 2013 that we have seen growth in used."

As leasing has become a larger percentage of new-vehicle sales — about 30% — more two- or three-year-old models have come off lease and hit the used market.

"They are providing more younger alternatives, and their price point has the under-$20,000 alternative that has almost completely disappeared from the new vehicle market from a sticker perspective," said Smoke, adding "it's nearly impossible" to find a new car under $20,000. At the end of 2019, 2% of sticker prices were at or around $20,000.

The pricing gap between new and used vehicles has continually widened, reaching nearly $15,000 in the third quarter of 2019: The average new vehicle had a sticker price of $37,242; the average used price was $22,291, according to the latest data from Edmunds. 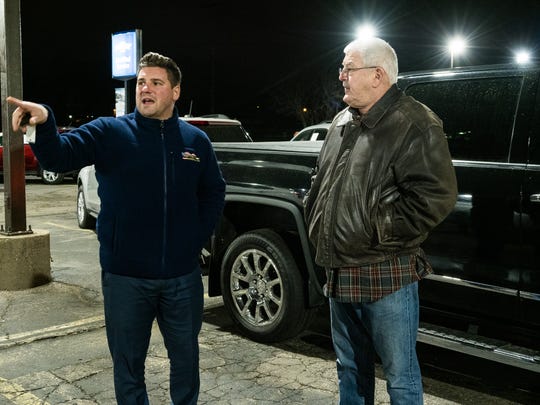 Matthews-Hargreaves Chevrolet salesman Domenic Maiani goes over the features of a certified pre-owned truck with potential customer Frank Ceravolo of Warren at the Royal Oak dealership on January 9, 2020.Ceravolo and with wife Barbara are looking to purchase a newer truck. (Photo: Brooke Brzoska-Ogorek, Special to Detroit News)

The disappearance of lower-priced vehicles comes as a result of the shift toward light trucks and the amount of new, more expensive technology in vehicles today. Said Smoke: "That trend is not going to change. It's going to march to even higher prices as we see more electrification and as we see more of a move toward truly autonomous vehicles."

Automakers and their dealers try to "satisfy" the customer with their certified pre-owned programs and hopefully convince them next time to buy new, said Ivan Drury, senior manager of insights for Edmunds.

"The idea being that for most certified pre-owned, you are removing the risk," Drury said.

Offering certified pre-owned programs not only works well for the consumer, but it also benefits dealers and manufacturers, Smoke said. Dealers make more of a profit margin selling on their used-car lots.

For manufacturers, "the more they have a thriving (certified pre-owned) market, typically the better we see their used vehicles retaining their value because there is more demand for them," Smoke said. That then enables dealers to offer more attractive leases because the vehicle maintains its value after it goes to the used market.

Walt Tutak, general manager of the Matthews-Hargreaves Chevrolet in Royal Oak, said there was an increase in used sales year-over-year at the dealership. He also noted 90% of his new car sales are leases, a cheaper option than buying new.

A monthly payment on a new car is $72 more than a lease payment, according to Cox Automotive. Rising new prices have led consumers to turn to leases, but analysts say rising lease payment will lead some buyers to the used market.

"This area is a big, big leasing area," Tutak said. "They say the average car on the road is 11 years old, but if you look around here, you don't see a bunch of junk, really, but maybe out west you do where people got to buy them. It's a completely different market in this area."

A few weeks after her trip to the Royal Oak Chevrolet dealer, Ceravolo is still navigating her way through purchasing a vehicle. The last time she did so was 12 years ago when she leased her Dodge Dakota, which she later bought out of its lease. Much has changed since then — more options today and the vehicles "are a lot better."

"I think vehicles are a lot more expensive now, but everything is; everything has gone up," she said. "I am leaning more toward the used vehicle because the leases are not as affordable."