Washington — President Donald Trump signed his proposed replacement for the North American Free Trade Agreement on Wednesday, clearing the way for expected approvals in Canada and Mexico and delivering a measure of trade certainty to automakers. 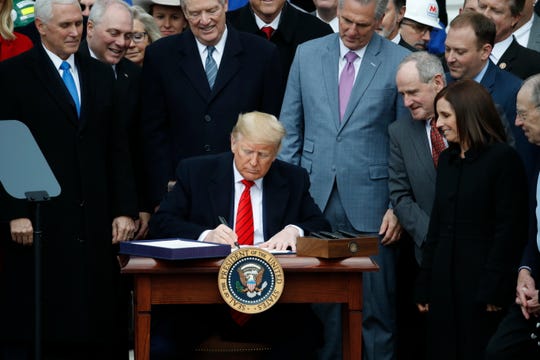 Under the United States-Mexico-Canada Agreement, automakers will have to produce cars with 75% of parts originating from the U.S., Canada or Mexico to qualify for duty-free treatment. The requirement, referred to as “rules of origin,” is an increase from 62.5% under current North American Free Trade Agreement rules. In addition, 40-45% of an auto's content must be made by workers earning at least $16 per hour. Vehicles not meeting the requirements will be subject to a 2.5% duty.

"Everybody said this was a deal that could not be done," Trump said during the signing ceremony at the White House. "Too complicated, too big, couldn’t be done. we got it done. And today, we are finally ending the NAFTA nightmare and signing into law the brand new U.S-Mexico-Canada Agreement.

"The USMCA is the largest, fairest, most balanced and modern trade agreement ever achieved. There's never been anything like it," Trump continued. "The USMCA is estimated to add another 1.2% to our GDP and create countless new American jobs. It will make our blue collar boom, which is beyond anybody’s expectation, even bigger, stronger and more extraordinary, delivering massive gains for the loyal citizens of our nation."

No Democratic lawmakers were invited to attend Wednesday's signing ceremony despite bipartisan support, a fact that was lamented by House Speaker Nancy Pelosi, D-Calif.

The Trump administration has expressed optimism that the USMCA and the recent trade deal with China will spur economic growth as the president heads into a re-election battle. With Michigan expected to again be a central battleground in the 2020 election, Trump is making his first post-signing visit to Warren to tour the Dana Inc. auto parts facility on Thursday.

U.S. Rep. Paul Mitchell, R-Dryden, who is retiring from Congress at the end of 2020, was the only lawmaker from Michigan who was invited to attend the signing ceremony, according to an invitation list that was released by the White House.

General Motors Co. CEO Mary Barra and Ford Motor Co. President of Automotive Joe Hinrichs were in attendance at the signing ceremony, and they were acknowledged from the podium by Trump.

"Anything over $2 billion, you're allowed to stand," the president quipped.

Automakers and groups that lobby for the industry in Washington hailed the signing of the USMCA, saying free trade with Canada and Mexico are vital to Detroit manufacturers' ability to compete in the international market.

GM said it a statement: "The agreement is vital to the success of the North American auto industry... The certainty that comes with having this strong and modern agreement in place is welcome news and we look forward to working with all three governments on its implementation."

Hinrichs added, also in a statement: "This trade pact spurs innovation, cracks down on currency manipulation and supports U.S. manufacturing while ensuring the U.S. auto industry remains globally competitive. We are grateful for these bipartisan efforts and will continue to be a collaborative partner as USMCA is ratified and implemented in all three markets.”

Democrats highlighted changes to the initial draft of the USMCA submitted by the Trump administration in 2018 that were focused mostly on provisions involving enforcement of provisions designed to protect American workers from problems caused by low wages in Mexico and environmental protections.

"I was somebody that believed we needed a new NAFTA," U.S. Rep. Debbie Dingell, D-Dearborn, said on a call with reporters ahead of Trump's signing ceremony. "This trade deal won’t undo the damage that’s been done to workers since NAFTA 1.0 was passed….We have too many factories that are empty, and I have too many workers that are unable to compete with subpar non-unionized workers in Mexico.

"This agreement is an improvement, but I think the message from us as this is just the beginning," Dingell continued.

The labor provisions are an attempt to boost U.S. jobs, but it remains to be seen if automakers that have gravitated to lower wages in Mexico will decide if they can profitably return more production stateside.

Mexico says that about 30% of its current auto production would not conform to the new rules, but the country has not specified which rules would not be met. Industry observers expect some models that have low domestic sales volume or are too costly to bring into compliance will be withdrawn from the U.S. market.

The vast majority of U.S. and Canadian production is expected to conform to the rules within a three- to five-year transition period, the Ann Arbor-based Center for Automotive Research forecasts.