Pearson is the 12th person convicted of a crime during the years-long federal investigation into UAW corruption. He pleaded guilty after being accused of helping embezzle more than $1.5 million in union funds spent on personal luxuries for labor leaders, including golf, cigars, private villas and liquor in Palm Springs, Calif., and elsewhere.

His cooperation is viewed as a potential tipping point in the years-long probe because Pearson was a close aide to Jones, and his assistance could put pressure on others to cooperate, legal experts said.

“That is certainly problematic for the UAW if Jones cooperates and can point out other sins of the union,” said Peter Henning, a Wayne State University law professor and former federal prosecutor. “He could be a key witness if the U.S. Attorney’s Office wants to bring a racketeering lawsuit."

Pearson faces up to five years in prison for the charge of conspiring to embezzle union funds and aiding a racketeering enterprise. Prosecutors have agreed not to seek more than 30 months in prison, but could ask Borman for a lower sentence if Pearson provides substantial assistance.

The guilty plea continues a steep fall for one of the union's most powerful leaders. In six months, Pearson went from serving on the UAW's governing International Executive Board and overseeing the union's largest geographic region to becoming a criminal target whose home and offices were raided by federal agents. He was placed on leave after being charged in September and resigned two months later.

Former UAW President Gary Jones was charged with conspiracy to embezzle union funds and conspiracy to defraud the U.S. on March 5. He pleaded guilty June 3 and faces up to five years in prison when sentenced in October 2020. Carlos Osorio, AP
Fullscreen 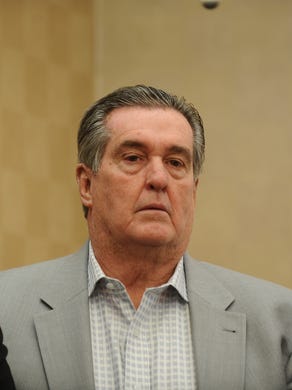 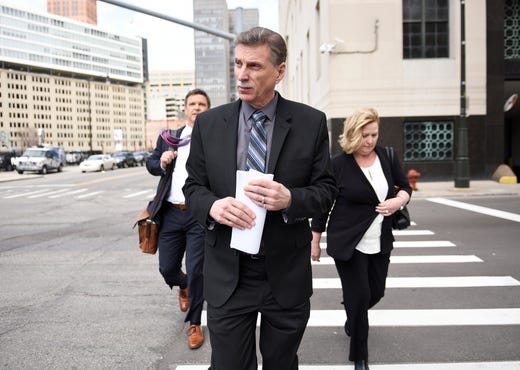 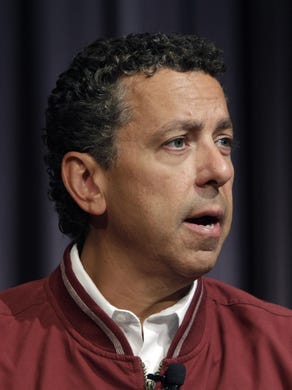 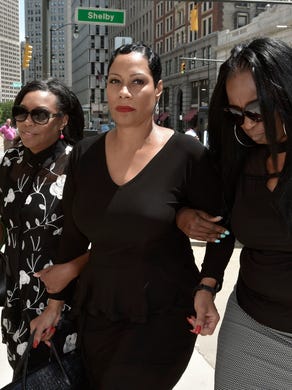 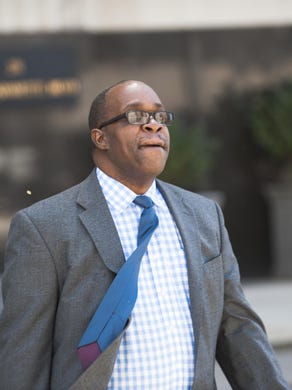 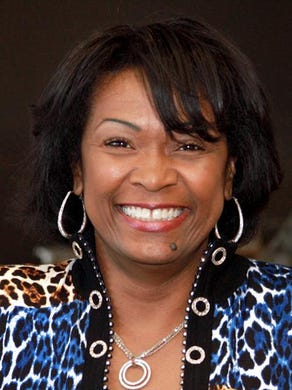 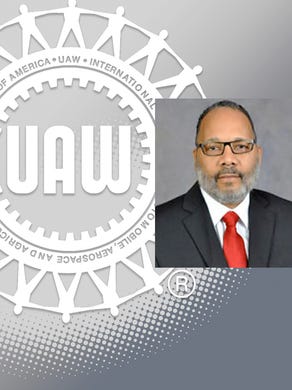 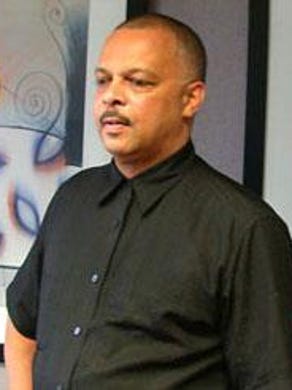 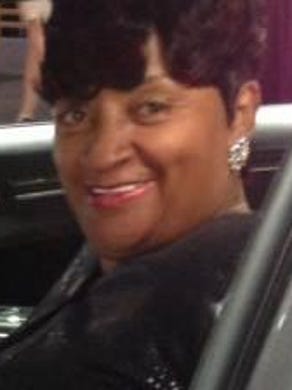 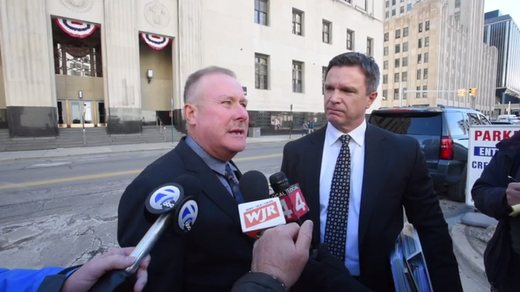 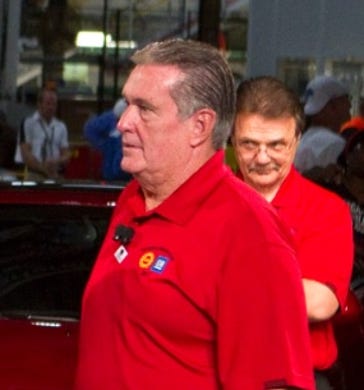 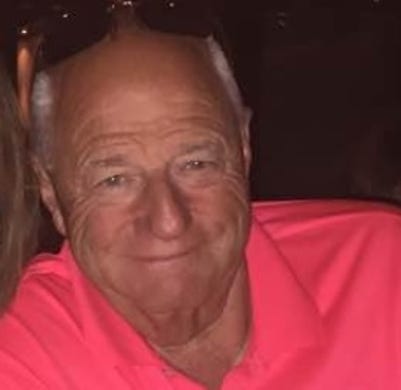 The plea deal portrays Pearson as carrying out orders from Jones and Williams to rent private villas and buy large quantities of cigars and alcohol, and covering up expenses by filing phony reports with the union. Jones' lawyer declined comment.

The corruption scandal has exposed the UAW to possible federal oversight if prosecutors decide to file a civil racketeering case against the union. Such a move could cost the union tens of millions of dollars, impose prolonged federal oversight and involve replacing labor leaders.

U.S. Attorney Matthew Schneider has said federal oversight of the UAW is an option once the government determines the depth of corruption within one of the nation's largest and most powerful unions.

Outside federal court in downtown Detroit, Schneider called the guilty plea "good news," adding: “This is exactly what we expect and would hope for. A UAW official is pleading guilty and taking responsibility for his actions, admitting his conduct and agreeing (they) did something wrong.”

Pearson has “accepted responsibility and he’s cooperating truthfully … certainly owning everything he did," his lawyer Scott Rosenblum said. He would not comment on the potential for Pearson’s cooperation leading to a federal takeover of the union.

“That would be up to them,” Rosenblum said. “My role is defending Mr. Pearson and making sure he gets the best outcome possible. That’s what I intend to do.”

"Vance Pearson blatantly violated his oath of office and betrayed the trust of all our hard-working members," the union said in a statement. "In November 2019, the UAW International Executive Board filed its own action against Mr. Pearson not just to remove him from his elected position but taking away his membership in the UAW entirely. While our union is moving forward, we will never forget the costly lessons from our past."

The racketeering enterprise lasted from 2010 until September 2019 and involved Pearson and at least six others, according to the government. Jones and Williams are not identified by name in court filings. Instead, prosecutors refer to them as "UAW Official A" and "UAW Official B." 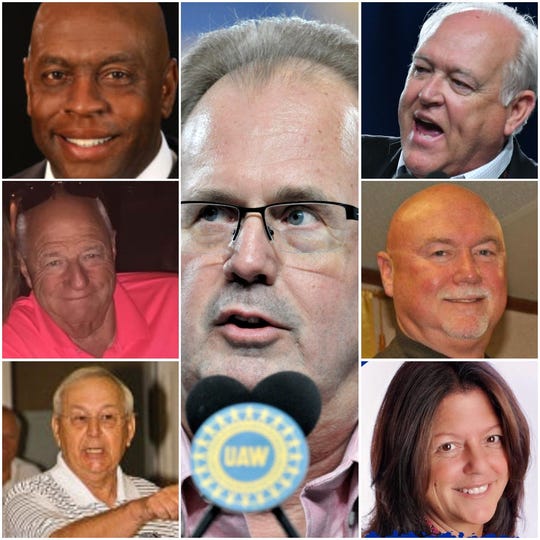 The embezzlement scheme described by prosecutors involved filing phony vouchers that concealed the true nature of expenses in Palm Springs and in Missouri.

Pearson's plea deal included new allegations from prosecutors about how "UAW Official A" and "UAW Official B" were involved in the conspiracy.

Pearson also ensured that "UAW Official B" was able to use, for months at a time, private villas in Palm Springs from 2015-18, prosecutors said. UAW money paid for the villas, according to the government. 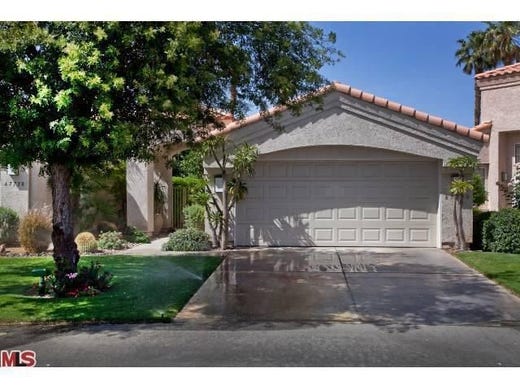 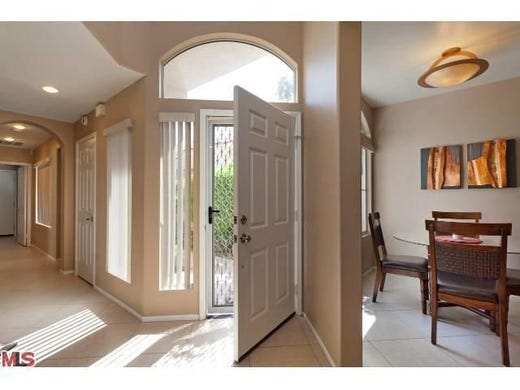 The UAW held a five-day conference in Palm Springs in 2016 but federal investigators say the villa was rented for 67 days.   Realtor.com
Fullscreen 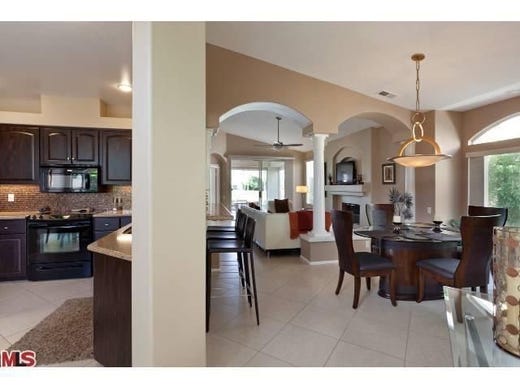 The villa is worth an estimated $501,000 and features numerous upgrades.   Realtor.com
Fullscreen 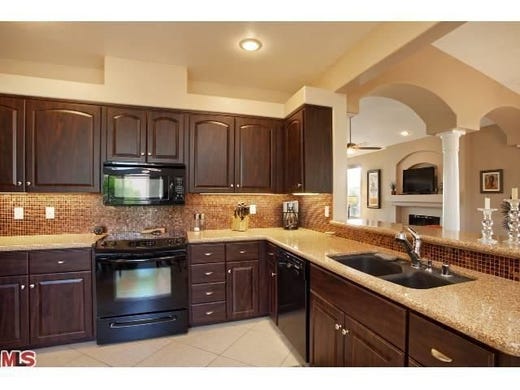 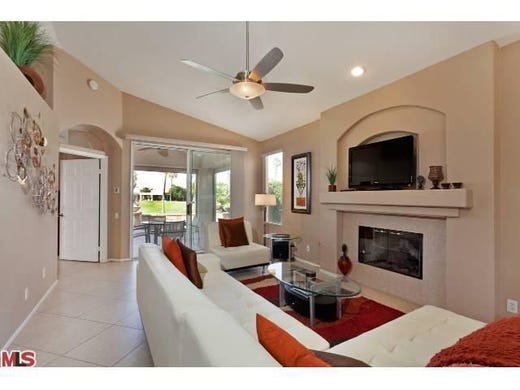 Former UAW official Amy Loasching has not been charged with wrongdoing during the ongoing investigation. Realtor.com
Fullscreen 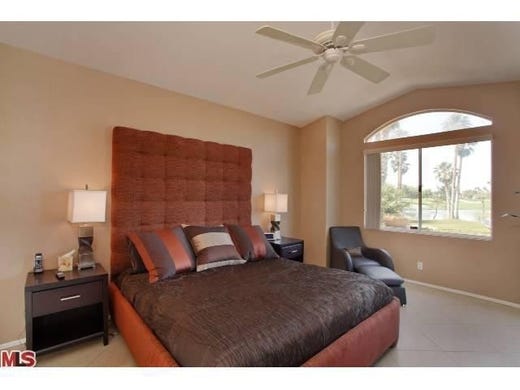 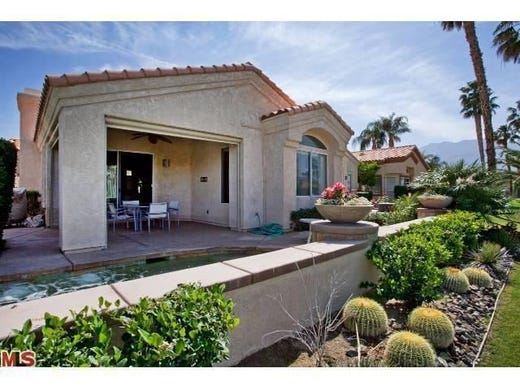 A view of the backyard pool and hot tub at the private villa rented for UAW official Amy Loasching in Palm Springs. Realtor.com
Fullscreen 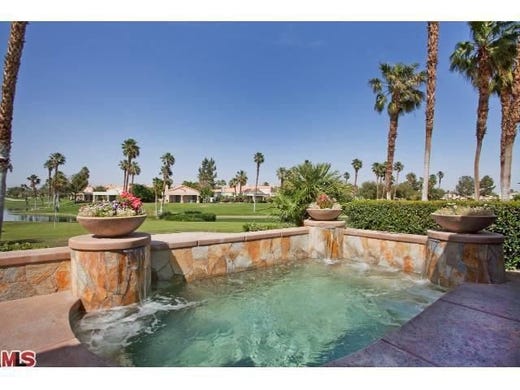 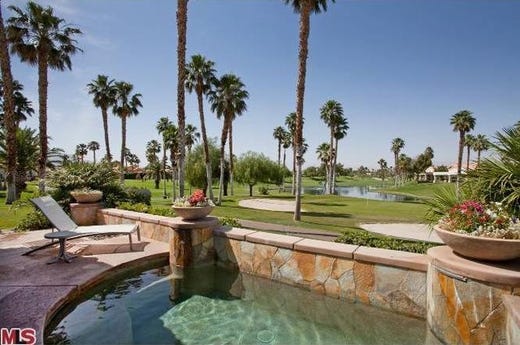 A view from the pool overlooking the Desert Princess Country Club. Realtor.com
Fullscreen 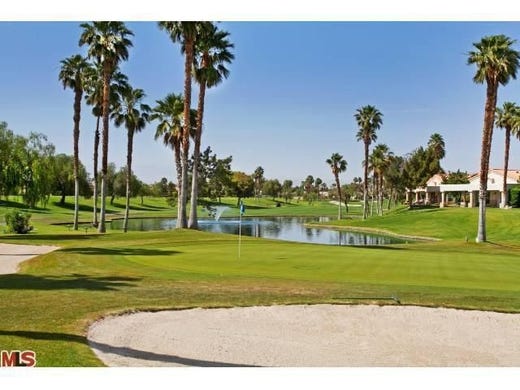 Pearson was tasked with providing alcohol and cigars for "UAW Official B" and his spouse, according to prosecutors. Pearson also arranged for the spouse to charge expenses at Loew's Coronado Bay Resort in California "even though UAW Official B's spouse was not an officer or employee of the UAW and the expenses had no legitimate union business purpose," prosecutors wrote.

Williams' criminal defense lawyers did not respond to a message seeking comment Friday.

Pearson, 58, of Saint Charles, Missouri, pleaded guilty six months after emerging as a target of the investigation of corruption within the UAW.

Since those August raids, Pearson has been accused of helping the former presidents embezzle union funds. Prosecutors also have hinted in court filings that they have secret recordings of Pearson, Jones and another aide discussing possible crimes. 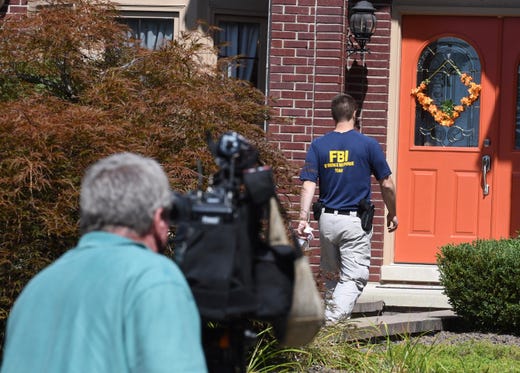 An FBI agent enters the home of UAW President Gary Jones during a search of the home in Canton Township. Max Ortiz, The Detroit News
Fullscreen 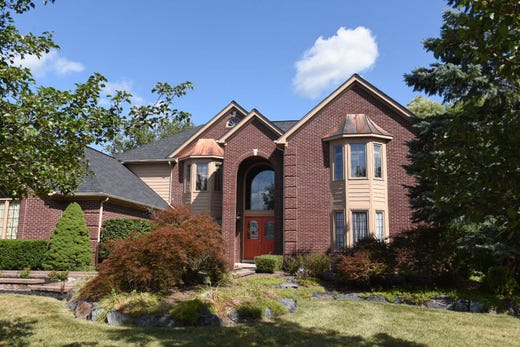 The Canton Township home of UAW President Gary Jones was one of a series of raids in at least four states Wednesday, including the California home of former President Dennis Williams. The searches are the latest expansion of a years-long investigation into bribes, kickbacks and attempts by auto executives to influence labor negotiations with the UAW.   Max Ortiz, The Detroit News
Fullscreen
FBI investigators leave the home of UAW President Gary Jones after a search Wednesday in Canton. Max Ortiz, The Detroit News
Fullscreen 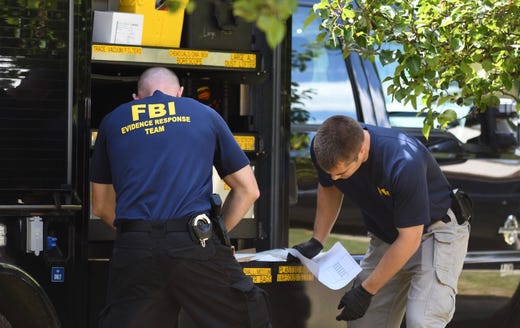 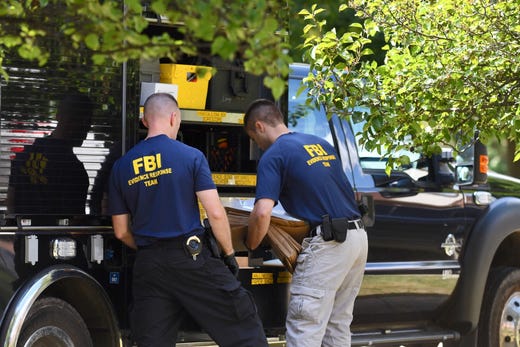 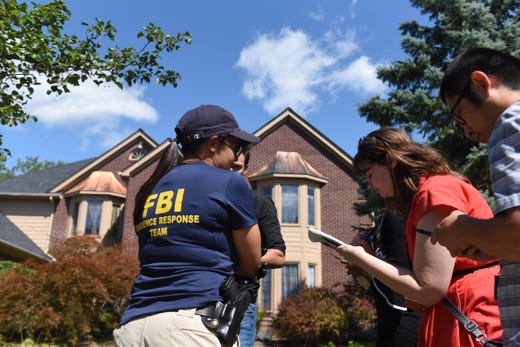 FBI special Agent Mara Schneider speaks to the news media outside the home of UAW President Gary Jones after the agency searched the residence. Max Ortiz, The Detroit News
Fullscreen

Pearson was a close aide to Jones. He served on the board of directors overseeing Jones' charity and succeeded Jones as director of Region 5. The region covers 17 states and is based in suburban St. Louis.

But after Pearson was charged, the union announced it would disband the region as part of a broad series of reforms.

As part of his plea deal, Pearson has agreed to forfeit $119,000. That includes $81,000 from his so-called "flower fund," an account originally established to pay for flowers for auto workers' funerals. Prosecutors, however, said senior staff were forced to contribute to the funds, which are controlled by top UAW officials.

Those top UAW officials, prosecutors said, used the flower fund money for personal expenses. The News first reported about the flower fund aspect of the corruption investigation in March.

Pearson started negotiating a deal with prosecutors as early as November after prosecutors disclosed that investigators were armed with evidence that includes bank records, cooperation from top labor leaders and what court records suggest are secret recordings.

The use of direct quotes is a strong indication investigators obtained audio recordings of Jones, Pearson and other UAW officers either through a wiretap or a hidden recording device, legal experts told The News. The government has yet to file discovery notices in federal court that would reveal whether prosecutors have evidence obtained through wiretaps or other electronic surveillance.

A video primer on corruption: Count the kickbacks, cash and bribes pocketed by Metro Detroit's most corrupt UAW bosses, auto execs and politicians. The Detroit News

In court filings, prosecutors quoted a conversation between Pearson and another UAW officer, Edward "Nick" Robinson, in July. Robinson is expected to plead guilty and is due in court Feb. 18.

Pearson told Robinson he would get him a burner phone so UAW officers involved in the conspiracy could talk freely without fear of being recorded by a federal wiretap, according to the criminal filing.

Pearson also told Robinson that if he had anything incriminating "at your house," prosecutors wrote, "then get rid of it."