UAW's new dissidents not the first to call for one-member, one-vote

UAW's new dissidents not the first to call for one-member, one-vote

Detroit — A group of dissidents in the United Auto Workers is the second in 30 years to attempt change in the democratic union they say has really been ruled by one party: the Reuther Administrative Caucus.

That caucus has nominated the winning candidates for the union's executive board members for most of the past 70 years — with the exception of one notable exception, a challenger from the New Directions movement that rose up in the mid-1980s.

Formed in the union's now-defunct Region 5 based in St. Louis, the New Directions movement called for amending the UAW constitution for a "one-member, one-vote" system. The current process has member-elected delegates from each local elect the international leaders. 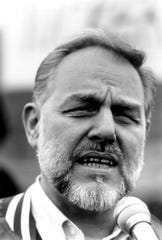 The late Jerry Tucker, shown here in 1992, challenged the old guard at the UAW as part of the New Directions movement beginning in the mid-1980s. (Photo: Detroit News photo archive)

"It was a spirited group … who just wanted a better union for the workers," said Mike Cannon, a former New Directions member and retired international representative for the UAW from Region 5. "It was that energy that propelled us into the victories that we were able to accomplish. I don’t regret any of the decisions we made. It was just such an enlightening moment to fight for a great union."

The New Directions efforts inspired the current push from a reform group calling itself Unite All Workers for Democracy. The new group — created as the labor union has been shaken by a federal corruption investigation implicating top UAW officials — has been gathering support from union locals in calling for a special convention to implement the direct election of union officials.

"They were fighting for the same things we are fighting for," said Chris Budnick, a seven-year UAW member at Ford's Kentucky Truck Plant and founding member of Unite All Workers for Democracy.

The New Directions movement was born from the frustration of how the region was being run and who was running it. Ken Worley was the region's director at the time, but Cannon said Worley was an ineffective leader who depended on his assistant, Jerry Tucker, who was on the front line fighting for better contracts. Local presidents in the region formed New Directions and asked Tucker to run as director in 1986.

Members of New Directions were concerned about the future of work for union members, and about losing wages and benefits. The movement was suspicious of the union's interest in working with companies on joint programs.

Tucker was elected in 1988 as Region 5 director only after a federal investigation found election-rigging in the 1986 race between Tucker and Reuther Administrative Caucus-backed incumbent Worley. A new election was ordered under the supervision of the Department of Labor, leading Tucker to take office.

But Tucker, who died in 2012, wasn't able to make much headway while on the international board of directors because he was from an opposing party, New Directions members say.

Peter Downs, a former auto worker and New Directors member from Region 5, joined the movement because he felt it “was more true to what I thought unions were supposed to be about.”

“Having one party ruling anything paves the way for a lot of corruption because you have less accountability,” he said.

Supporting Tucker came with a cost. As an international representative who was expected to back the establishment's Worley, Cannon was transferred in 1989 from Region 5 to the UAW president's office at Solidarity House in Detroit. It was a post that international staff members called "Lepers' Row," because it was where that those who challenged the powers-that-be were sent, Cannon said.

"You essentially have leprosy and you are ostracized because of your disease," Cannon said.

The Reuther Administrative Caucus took back power of Region 5 in the 1990s. Tucker challenged Owen Bieber for the presidency in 1992 and lost. The New Directions movement lost momentum and fizzled out.

"People started to lose interest because we were fighting this powerful machine," Cannon said.

The most recent move toward direct elections is “a significant response to the wave of scandal that has beset the UAW,” said Marick Masters, a business faculty member at Wayne State University.

Masters said direct elections of international union officers would be a step in the right direction for the union. He said it would show greater reform than what’s already been implemented by the UAW, including more financial and ethical oversight from within.

Direct elections would maybe do more than anything else to forestall a government takeover, Masters said, because "you would clearly have competition for the current leadership positions."