Those sleek new Teslas or electronic BMWs have a distinctly 19th century feature that you may not be aware of, among their batteries

Talinn, Estonia – Your sleek new Tesla Model S or electronic BMW has a distinctly 19th century feature that you may not be aware of, among its batteries. A company in Estonia wants to change that.

Skeleton Technologies Group OU is working on supercapacitors, light-weight and long-life components that can distribute intensive bursts of power. These may help eliminate lead-acid batteries, a piece of technology invented in 1859 that still lurks under the hoods of Teslas in addition to the main lithium-ion power source. 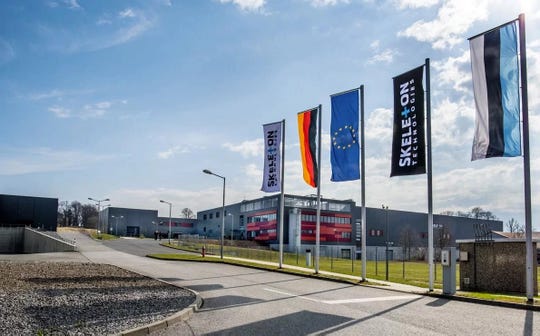 Supercapacitors have some way to go before they are widely adopted. There is still a gap with the popular lithium-ion units on how much energy they can store, Skeleton Chief Executive Officer Taavi Madiberk admits. Even so, the technology is promising for offering higher peak power output and reliability in extreme temperatures and Skeleton has already sold it to clients across the transport industry.

“Sometimes people think that lead is a problem of the past because it relates to internal combustion engines but in practice all electric vehicles have 12-volt lead acid batteries,” Madiberk said. “We are working on a viable alternative to replace all lead acid batteries.”

Tesla Inc. Chief Executive Officer Elon Musk actually moved to Silicon Valley in the first place to do research on supercapacitors in his PhD studies at Stanford University, he wrote in a blog post in 2006. While Musk eventually dropped out from Stanford to start his new ventures, he hasn’t abandoned his bet on supercapacitors, also referred to as ultracapacitors.

The sector is at a stage where the lithium-ion battery industry was around 1999, according to Madiberk, whose company also has a base in Germany. Back then, lithium-ion batteries cost over $5,000 per kilowatt hour, compared with under $200 now. Supercapacitors may similarly go from $5,000 to as low as $300, he said, without giving an exact timeline.

The technology may be useful for some tasks such as regenerating energy from braking, perhaps in conjunction with a lithium-ion unit, said James Frith, an analyst at BloombergNEF who focuses on energy storage. However, it’s only one of a number of available routes for the industry.

“There’s been a lot of interest in supercapacitors over the years,” Frith said. “The trouble is that lithium-ion batteries have been coming down in price quite rapidly.”

To replace lead-acid batteries, Skeleton is cooperating with some major European carmakers, Madiberk said, without disclosing names. Its products reach an energy density – a key measure of performance – of 60 watt-hours per kilogram, exceeding regular lead-acid batteries. Their raw material, a patented graphene composite, provides cost advantages in the long term not just compared with lead-acid but also lithium-ion batteries, he said.

“If you look at the supplies of cobalt, lithium, nickel, manganese, then sooner or later with electrification we see significant bottlenecks,” Madiberk said. “The issue with lead is, of course, it’s toxic: the manufacturing process is environmentally harmful.”

In heavy transportation, Skeleton has supplied systems that recuperate the braking energy of trams made by Czech manufacturer Skoda Transportation AS and which reduce the fuel consumption of hybrid-electric buses made by the U.K.’s Wrights Group Ltd. Having signed orders totaling more than 150 million euros ($163 million) last year, the company targets revenue of 1 billion euros by 2025 when it sees its serviceable market reaching about 60 billion euros. It expects to reach a profit on the operating level by the end of next year.

Aside from Tesla, Madiberk lists U.S.-based AVX Corp. and China State Railway Group as key competitors. The raw materials Skeleton uses have given it a competitive advantage over the bigger rivals, he said.

The company’s products had the highest power and maximum peak current from five supercapacitor makers, including Maxwell and Ioxus Inc., in last year’s study by the U.S. Office of Naval Research.

Supercapacitors may find their niches if the cost becomes competitive, said Frith, the analyst at BloombergNEF.

“The heavy transportation applications probably is the best use case for supercapacitors,” Frith said. “There definitely is a lot of areas within the automotive market where they could find applications.”