The introduction comes 26 years after the infamous slow-speed police chase of Simpson in a white Bronco. Ford said the timing is incidental.

The Ford Bronco will be revealed July 9, which happens to be O.J. Simpson's birthday.

The introduction, which was moved from March date because of the coronavirus pandemic, comes 26 years after a slow-speed police chase of Simpson in a white Bronco in Los Angeles. The chase was one of the most-watched events in TV history, CNN reported, and thrust Ford's original SUV into the spotlight.

Simpson, at the time, was a suspect in the murder of his wife Nicole Brown Simpson and Ronald Goldman. He was acquitted in 1995. 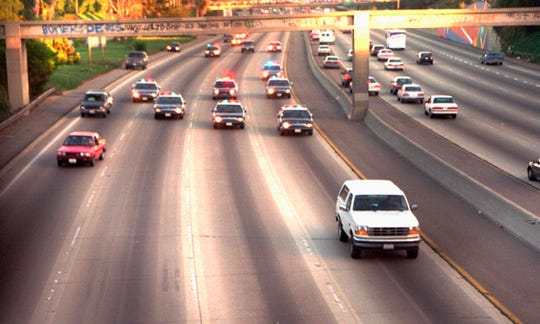 The June 1994 slow-speed police chase of a white Ford Bronco, driven by Al Cowlings and carrying O.J. Simpson, was watched in real time across the world. Ford has moved the debut date of the new Bronco because the original reveal was planned for Simpson's birthday. (Photo: Joseph R. Villarin, AP)

"The timing is purely coincidental," Ford spokesman Mike Levine said in a statement.

The Bronco is making a comeback after Ford stopped production in 1996 of the off-road SUV, a world that Jeep dominates but in which Ford is confident it can compete.

“That wasn’t probably the finest date in the Bronco’s history, and I don’t think they want to associate it with the launch date of the vehicle,” said Karl Brauer, executive publisher at Kelley Blue Book. “I think if Ford could do it over again, they probably would choose not to have it on that day.”

Ultimately, though, Ford’s goal is to grab potential customers’ attention and sell vehicles. Whether choosing the date was intentional or not, it could be in the automaker’s favor, Brauer said.

“It’s probably only going to increase the buzz about the launch and build awareness,” he said, “which is going to help Ford. It’s already one of the big-deal cars for the upcoming model year.”

The Bronco will be built at Ford’s Michigan Assembly Plant in Wayne, the only plant where the Bronco has ever been built. The vehicle was in production for 30 years before it was discontinued. The new Bronco will go on sale in 2021.