He says the automaker is equivalent to GM, Ford. 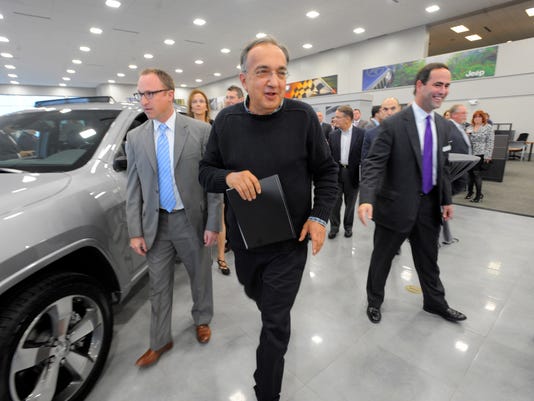 The listing of Fiat Chrysler Automobiles on the New York Stock Exchange is aimed to better benchmark the company against General Motors Co. and Ford Motor Co., according to CEO Sergio Marchionne.

"As a global producer of vehicles, I think we're fully equivalent to the other Detroit two," he told reporters Friday night during a Suburban Collection dealership grand opening event in Farmington Hills. "I think the objective in coming to New York as a stock listing is really to try and get us evaluated and benchmarked against them."

His comments came two days before Fiat SpA and Chrysler Group LLC are expected to officially merge into FCA and three days before the new company is scheduled to be listed on the NYSE.

Marchionne also said FCA will release its nearly $900 million in shares that it owns from former Fiat shareholders opting to sell instead of taking FCA shares and shares in its treasury. When that happens, he said, "depends on market conditions, but they will come back into the U.S. market."

"The whole objective here is to create flow to get the stock trading," he said, adding this week is not the best time to release the shares.

Shares of both Ford and GM recently hit 52-week lows following their investor days. Ford said it expects to make $6 billion in pretax profit, $1 billion to $2 billion less than its original goal. GM tumbled following a Wall Street analyst's warning to investors that he was cutting his profit outlook for the Detroit automaker.

Marchionne said he believes FCA is positioned globally to be as successful, if not more, in the medium- to long-term as GM and Ford. He mentioned Europe and Latin America as places he specifically sees the company having an upper hand in.

He also mentioned Chrysler's growth over the last five years in the U.S.

"If you compare us to GM, we are not phenomenally different in terms of our revenue generation," he said. "We're predominately a U.S. automaker with operations in foreign countries."

FCA's listing is not an IPO. There will be no new shares initially offered — just shares of Fiat SpA transferred from the Italian stock market that can be traded and purchased in New York. Still, it represents a significant milestone in a company that several years ago was on life support.

"There were days that were worse than others, but on this travel here, to FCA, I never ever doubted that we would get here because it's the bloody right thing to do," he said.

The listing is expected to help fuel a $60 billion-plus, five-year growth plan outlined in May. The plan includes exporting Jeeps globally, growing net profit five-fold and increasing sales 60 percent by 2018.

Separately, Marchionne said a meeting with at least six Ohio delegates on Thursday regarding Jeep Wrangler production staying in Toledo was a "very open discussion," but no decisions were announced.

The meeting was a week after Marchionne caused a stir from the Paris Auto Show by saying enhancements to the next-generation Wrangler such as an aluminum body and a new unibody platform would likely mean leaving its longtime Toledo Assembly Complex.

Marchionne said the company remains "committed to Ohio," but Wrangler "needs a substantial update" and production could still be moving to a newer, modernized FCA facility.

"Purely on the numbers, there's a substantial difference in investment costs between Ohio and other potential sites in the U.S.," he said.

Marchionne promised if the Wrangler does leave Toledo, Chrysler "will not abandon" the site and the number of jobs at the facility will not be negatively impacted.

Suburban Collection CEO David Fischer, when introducing Marchionne at the event for its new Chrysler, Dodge, Jeep and Ram dealership , thanked him for saving Chrysler following its government-backed bankruptcy in 2009.

"It's an honor to have Sergio with us tonight," he said. "I believe everyone in this room knows of the heroic feats that have happened since he has led the rescue of the Chrysler brand."

Suburban Collection has 35 dealership locations – primarily in Michigan – offering more than 30 brands, including seven under the FCA family. The company employs about 2,000 people in Michigan.