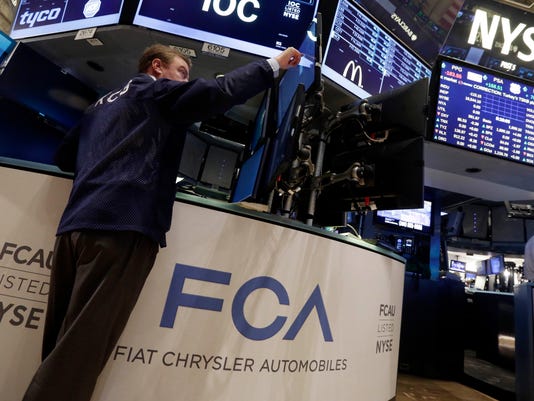 Fiat Chrysler Automobiles began trading on the New York Stock Exchange on Monday, as the newly merged company seeks to raise its profile and give U.S. investors a chance to own a piece of the Chrysler comeback. (Photo: Richard Drew , AP )

New York – — Fiat Chrysler Automobiles NV debuted on Wall Street on Monday with the roar of a red La Ferrari in the background. It was an affair complete with Italian-style kisses on the cheek exchanged between FCA CEO Sergio Marchionne and Fiat chairman and family member John Elkann.

The newly formed Italian-American company — incorporated in the Netherlands, with its headquarters outside London — began its new listing on the New York Stock Exchange on Columbus Day. It trades under the symbol “FCAU.” Expansion of trading from Italy to the United States will give the automaker improved access to capital markets.

Stock for the world’s seventh-largest automaker closed down slightly, about 1 percent — off 8 cents from its $9 opening price. After rising as high as $9.55 soon after opening, it fell as low as $8.83. About 5.8 million shares trading hands in muted holiday trading.

Marchionne and Elkann stood on the balcony overlooking the stock exchange to ring the closing bell to cheers. They held the gavel together to end the trading session as reporters crowded on the trading floor to watch.

Marchionne said he wasn’t disappointed in the stock’s first-day performance. “I didn’t come here to see a big bang,” Marchionne told Fox Business. “The only thing that ultimately will move the share price is performance of the business.”

But it was hardly the overarching story on Monday.

Chrysler had been on the brink of collapse in 2008 when the Bush administration reluctantly agreed to a short-term bailout. The Obama administration was deeply divided on whether to save the automaker, and agreed in March 2009 to float billions more only if Fiat would take over the company. The administration handed Fiat control of the company without requiring it to invest any money — but ultimately, Fiat spent billions to acquire the remainder of the company.

Marchionne said when Fiat began the journey with Chrysler five years ago, it would have been “insane” for anyone to think it could have been ready to return to the stock market in 2014. Elkann said the move meant Chrysler “has all of the legitimacy of being one of the Big Three.”

Marchionne said Chrysler may eventually tap the debt markets or sell shares to raise capital, but said he didn’t need to do it now.

“It’s symbolic,” he said. “I don’t think this announcement would necessarily cause a spike in the market. I think it has more of a long-term effect.”

Morningstar Inc. senior analyst Richard Hilgert, in a recent note to investors, said he expected plenty of volatility in the short term for the stock due to the “limited number of shares, confusion about valuation and no pre-debut management road show.”

“In our opinion, Fiat Chrysler’s stock is not for the faint of heart,” he said.

IHS Automotive said Fiat Chrysler needs to make progress in certain areas, including adhering to U.S. accounting standards. And it remains the least fuel-efficient among major automakers in the United States, according to the EPA.

“While the listing on NYSE is a positive step for FCA and its ability to tap the U.S. financial markets, it has raised some questions and concerns from the financial community,” IHS said in a statement. “This includes the weaker news from Ford and General Motors with regards to their financial forecasts recently, as well as the complexity of the structure of the business.

“With this now complete, FCA will now be focusing on hitting the ambitious goals that were laid out during an investor day in May.”

FCA’s goals, outlined in a five-year growth plan in May, include exporting Jeeps globally, growing net profit five-fold and increasing sales to 7 million vehicles globally by 2018. IHS says it does not expect FCA to hit that 7-million sales goal; its forecast is for 5.1 million vehicles.

Marchionne and Elkann headed outside onto Wall Street to take pictures in front of a parade of Chrysler and Fiat cars. They skipped the Fiat 500 EV, Chrysler Town & Country and Ram ProMaster. Instead, they posed next to the red La Ferrari — a car fitting of the income brackets of some Wall Street traders. Three flags flew outside the stock exchange — the flags of the United States, Italy and Brazil, where Fiat is one of the largest automakers.

A crowd of onlookers and photographers urged them to get inside the supercar and start it up, which they did. A massive banner hung above them with the Fiat Chrysler logo and a blue “start” button. Marchionne told a reporter he had ordered a new one that was being built, and he would get it next year. He owns the previous version.

Other vehicles on Wall Street included a Jeep Renegade, Alfa Romeo, Dodge Challenger Hellcat and Chrysler 200. In General Motors’ 2010 initial public offering, the automaker had a similar parade of vehicles and photos with then-CEO Dan Akerson.

Ninety minutes after the market closed, the flags and banners were brought down as it started to rain. Most of the Fiat Chrysler cars were gone. But the Ferrari was still outside and drawing lots of photos from tourists.