Jeep may remain in Toledo after all

The talk about Jeep Wrangler production moving out of Toledo may have been premature.

Jeep may remain in Toledo after all 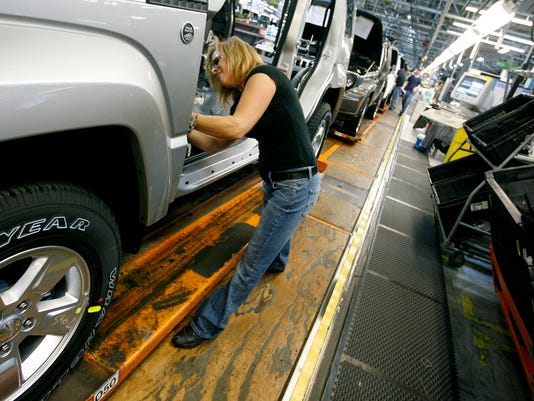 The uproar over Jeep Wrangler production possibly moving out of Toledo during the last several weeks may have been premature.

The next-generation of the popular sport utility vehicle will reportedly continue being produced using its current body-on-frame manufacturing process, thus remaining compatible with its current Toledo Assembly Complex home and likely staying in the city, Automotive News reported this week via unnamed sources.

Jeep spokesman Todd Goyer would not confirm nor deny the decision, saying the company does not comment on future product plans. He simply said “it will be the most capable Wrangler ever.”

The Toledo mayor’s office, which met with Fiat Chrysler Automobiles CEO Sergio Marchionne earlier this month to discuss Wrangler production, said officials are continuing with their plans to meet with Marchionne in the coming weeks and propose solutions to potential company concerns for production of the next-generation vehicle, which is expected in 2017.

“We haven’t gotten any confirmation from Chrysler,” said spokeswoman Stacey Weber. “We’re going to continue forward with our plan to meet with Chrysler and bring a proposal.”

Marchionne, from the Paris Auto Show earlier this month, caused a commotion in Toledo by saying enhancements to the next-generation Wrangler such as an aluminum body would mean significant changes to its manufacturing that would likely lead to production leaving its historic home in Toledo, where the first World War II Jeeps were manufactured.

“If the solution is aluminum then I think unfortunately Toledo is the wrong setup to try and build a Wrangler because it requires a complete, a reconfiguring of the assets which would be cost prohibitive,” he said on Oct. 2.

Marchionne never directly said the vehicle was switching from its current manufacturing process. But he did mention two facilities that use a different process called unibody manufacturing that have additional capacity when talking about production constraints. He also has continued to say if the vehicle were to move another would likely take its place and employment at the plant would not be negatively impacted.

“We will find ways, if there’s a shift, to deal with their concerns,” Marchionne told reporters during a dealership event on Oct. 10 in Metro Detroit. “I don’t think they should have any. We remain as committed to Ohio as we’ve been so far.”

A group of Ohio delegates, including four from Toledo, traveled to Auburn Hills a week after the comments to sit down with Marchionne and discuss the vehicle’s future. No decision was made at the meeting, but the city’s business case to keep the next generation Wrangler “was discussed at great length” and a future meeting was planned.

Part of that case could be to expand or move Wrangler production within Toledo. The Toledo City Council on Tuesday gave Mayor D. Michael Collins approval to spend nearly $10 million to buy a 58-acre property and more than 32 acres in North Toledo, according to local newspaper The Blade.

Marchionne, known as an intelligent negotiator, also could be using next-generation Wrangler production as a potential bargaining chip for local and state incentives and for contract negotiations next year with the United Auto Workers union.

“This is a complex set of negotiations with several players,” said Kristin Dziczek, Center for Automotive Research director of the industry and labor group. “I don’t think it has to wait until contract year for the UAW to start discussing it with them. Something this big could be a topic of ongoing discussion.”

A representative from UAW Local 12, which represents the Toledo plant was not immediately available to comment.