UAW signing bonuses are set to be paid Nov. 6. Retroactive pay is expected to be paid back from Sept. 14 on Nov. 13. 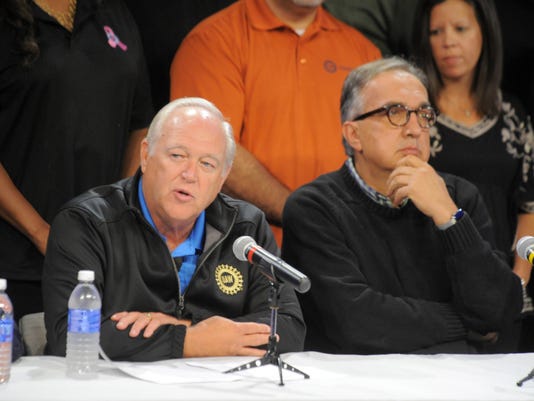 A new four-year contract with the United Auto Workers will increase costs for Fiat Chrysler Automobiles NV nearly $2 billion over the next four years, according to CEO Sergio Marchionne.

He did not give an exact cost of the deal; however, he cited that a $2 billion estimate reported by The Detroit News earlier this month is in line with the company’s expectations.

“The number is actually less than that but it’s broadly in line with the cumulative cost increase that we’re expecting over the period of time,” he said during a conference call to discuss third quarter results.

The company, Marchionne said, does not expect the increased labor costs to change product plans or North American profit margin expectations. He said the company “will have to find ways to offset the increase in costs” either “out of the market in terms of pricing” or the capital structure of running the company. He also mentioned broadly increasing its World Class Manufacturing initiative as a few ways to offset the costs.

The four-year deal was overwhelmingly ratified by 40,000 UAW members last week. It provides raises for all eligible hourly and salaried workers, at least $3,000 signing bonuses and profit sharing checks the final three years of the contract.

Chief Financial Officer Richard Palmer said the contract is expected to increase costs about 30 million euro ($33.2 million) in the fourth quarter compared to the “year-to-date run rate” under the previous deal. He also said the deal will cost the company 380 million euro ($420.8) in 2016, without specifying if it was a total or increase in cost.

Part of the significant costs this year will come from signing bonuses and retroactive pay that the company is expected to pay in November, according to memos to workers at four local unions.

Neither the union nor automaker would confirm or deny the payment dates.

The time frame of the retro pay surprised many industry experts because of how rich the deal was as well as one of the reasons the contract ratification process took so long was because of UAW members overwhelmingly rejected a first tentative agreement with the automaker.

The contract also includes second-tier workers – 45 percent of its hourly workforce – being boosted in steps over eight years to about $29 an hour or more, depending on the job — the same as veteran first-tier workers. The $30 rate is an increase from $25.35 under the rejected contract, and is $10 more than their current ceiling of $19.28 an hour.