More than 130 designs from high school students grades 10-12 were submitted for the annual competition. 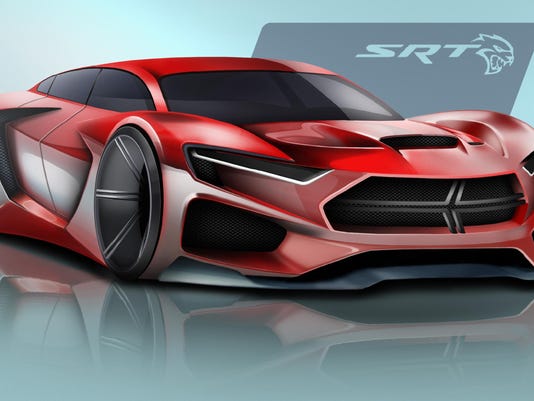 The first-place winning sketch for the FCA US Drive for Design competition, designed by Ben Treinen of Archbishop Moeller High School in Cincinnati, Ohio.(Photo: FCA)

The Dodge Hellcat SRT models of 2025 will be sleeker and lower to the ground, and look more like a supercar than a traditional muscle car.

All four students will be recognized and awarded with prizes on Feb. 26 at the 64th annual Meguiar’s Detroit Autorama at Cobo Center in Detroit. The four winning sketches will remain on display in the Mopar booth at the Detroit Autorama through Feb. 28.

“The thing I was just blown away with this year was the level of entries and how good they were,” said Mark Trostle, FCA US head of Dodge and SRT design. “The top four, we truthfully struggled which one was going to be the winner."

Prizes for students include Apple products, a three-week summer automotive design course at the College for Creative Studies, and an all-expenses-paid trip to Detroit.

More than 130 designs were submitted for this year’s competition, which challenged U.S. high school students in grades 10-12 to design a Dodge SRT Hellcat for the year 2025.

“It was very cool to see that there are those people out there that I always hope to reach that are passionate about cars and have the design and artistic ability to potentially become a car designer,” Trostle said.

One of those students was Jang, a 17-year-old senior from Bloomfield Hills who wants to go into automotive design after college.

The four winners were selected by a judging panel composed of many of the company’s lead designers, including Ralph Gilles, head of FCA global design; Joe Dehner, head of Ram Truck and Mopar design; and Trostle.

The FCA US product design team created the Drive for Design contest in 2013 as a way to educate young artists about careers in automotive design. It started locally in Detroit, and has grown to become a national contest.