Jeep Compass/Patriot replacement to be shown in Brazil

The compact SUV will be built there starting late this year

Jeep Compass/Patriot replacement to be shown in Brazil 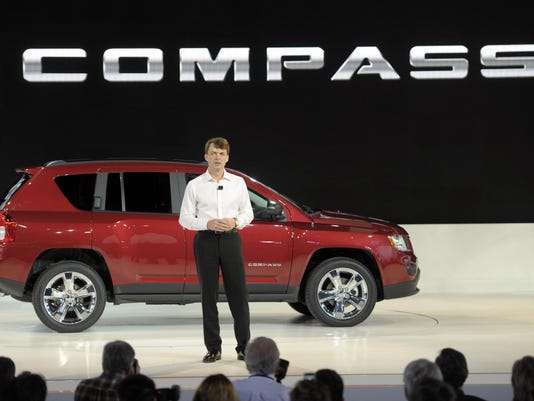 Mike Manley, President and CEO of the Jeep Brand shows a redesigned Jeep Compass during 2010’s North American International Auto Show. Manley said Thursday the brand would reveal its compact SUV replacement for the Compass and Patriot during the fourth quarter this year in Brazil instead of later this month at the New York Auto Show.(Photo: David Guralnick / The Detroit News file photo)Buy Photo

Auburn Hills — Mike Manley, Jeep’s global chief, said Thursday the brand would reveal its compact SUV replacement for the Compass and Patriot during the fourth quarter this year in Brazil instead of later this month at the New York Auto Show.

Manley, speaking at Jeep’s preview for the Moab, Utah off-road safari later this month, said the still-unnamed CUV will be shown and go into production late this year at the company’s plant in Pernambuco, Brazil. The plant is one of Jeep’s most modern facilities and has the capacity to make 250,000 vehicles per year.

“There’s no delay,” he told a group of reporters. “It’s perfectly on track and we’re very pleased with where it is. It’s just a nod to the importance of how well Brazil has done with Renegade and secondly a nod to that market and how we see it being developed.”

Manley previously told The Detroit News that the brand would show the Compass/Patriot replacement in New York. Instead of the CUV, Manley said now Jeep will use the New York show to share “pretty exciting news” on the Grand Cherokee.

He offered no details Thursday about U.S. production or the name of the CUV. He has previously said it will use one of the names of either the Compass or Patriot.

“We’ve got two very good names, two well-established names with Compass and Patriot that continue to perform very well,” he said at the Detroit auto show. “It will be one of those names — which one, we’re going to have to wait and see.”

Manley said the current Compass and Patriot will phase out as the new vehicle ramps up, and Jeep could keep producing both of them at the same time.

“There’s going to be a crossover period,” he said. “We have the opportunity to keep making them if there’s interest. I don’t think we would keep all three going.”