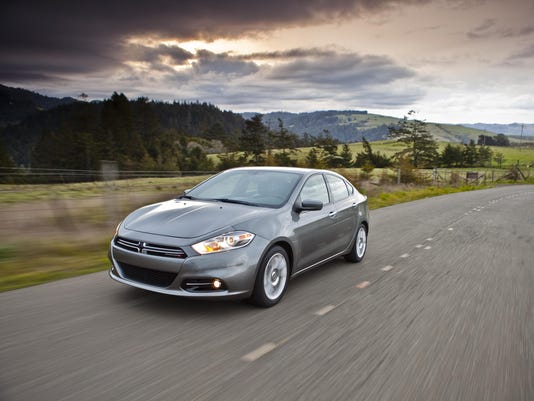 The Dodge Dart will not have a farewell trip.

Fiat Chrysler Automobiles NV confirmed its product plans for the 2017 model year will not include the compact sedan — making the 2016 model year the last for the Dart.

The company in July announced plans to end production of the car in September but did not say this would be the final model year for the Dart, as it shifts its production footprint in the United States to focus on Jeep and Ram utility and pickup vehicles.

The Dart gets the ax after only four model years of production in Belvidere, Illinois. Despite high expectations for the “groundbreaking car” with “Alfa Romeo DNA,” the car never hit the bull’s-eye with buyers.

“I think it’s going to redefine what the segment will be, and I think others will either catch up with us or we’ll own the segment,” Fiat Chrysler CEO Sergio Marchionne told reporters following the car’s unveiling during the 2012 North American International Auto Show in Detroit

Despite featuring new technologies from the company, including an 8.4-inch touchscreen, the car fell victim to a dwindling car segment, tough competition and complex available features and options that led to confusion among buyers.

“It was a vehicle they had high hopes for initially and then when that car went down in flames it was left an orphan,” said Jack R. Nerad, Kelley Blue Book executive editorial director and executive market analyst. “It quickly became a non-player and then it was just playing out the string.”

The Dart was touted as particularly important for the company because it is the first vehicle jointly developed between then-Chrysler Group LLC and Fiat SpaA. It was based on the Alfa Romeo Giulietta compact compact architecture from Europe but was wider and longer to handle Americans’ need for more space.

The company also invested hundreds of millions of dollars in Belvidere Assembly to produce the vehicle. The plant was first to build a new American vehicle based on a Fiat-derived architecture.

The company has not announced any update of a potential partnership for another automaker to produce the Dart and Chrysler 200, which will cease being produced in Sterling Heights in December. Marchionne last week said that the company continues to look for a partner for its car production, as it shifts production to utility vehicles. He indicated FCA staff was actively working on the partnership issue.

Unlike the Dart, the Chrysler 200 will receive a farewell tour. The midsize sedan — slated to end production in December — will be offered as a 2017 model.

The different production end dates between the Dart and 200 “are designed to allow ample time to retool manufacturing facilities for the products that will replace them,” FCA US said in an emailed statement.

The company declined to disclose days-supply for either of the sedans, citing it is “working with our dealers to forecast Dart and 200 production and sales volumes, which will allow us to satisfy our customers’ needs well into the 2017 calendar year.”

One shift of Sterling Heights Assembly Plant workers returned to the plant this week after being on indefinite layoffs since July 18. Due to poor sales — down more than 60 percent this year compared to 2015 — employees have been on temporary layoffs for much of this year, with a shift of about 1,300 starting indefinite layoffs on July 5.