The 2018 Stelvio is expected to compete with the sporty, up-market Jaguar F-Pace and Porsche Macan 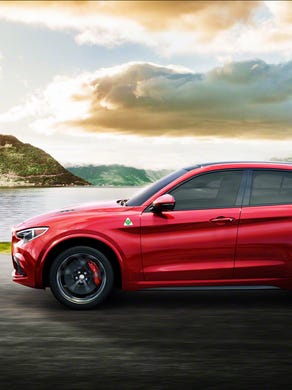 Alfa Romeo will unveil the 2018 Stelvio at the Los Angeles Auto Show, open to the public Nov. 18-27. Alfa Romeo
Fullscreen

The all-new Stelvio is the second of a new lineup of vehicles built off a  world-class architecture that embodies the brand’s la meccanica delle emozioni (the mechanics of emotion) spirit. Alfa Romeo
Fullscreen

Crafted by Alfa Romeo artisans at the Cassino plant in Italy, the all-new 2018 Stelvio lineup is  a testament to Alfa Romeo’s perfect balance of engineering and emotion, creating a premium mid-size SUV for driving enthusiasts that stands out in one of the largest and fastest growing segments in the U.S. Alfa Romeo
Fullscreen

“The all-new Stelvio, named after one of the greatest driving roads in the world – the Stelvio pass in the Italian Alps – sets a new benchmark for the segment,” said Reid Bigland, Head of Alfa Romeo. Alfa Romeo
Fullscreen

“Stelvio is uniquely engineered to challenge two-door sports cars on the track, without sacrificing any of the characteristics you would expect from a premium SUV, resulting  in the perfect mix of high performance, capability and Italian design,”said Reid Bigland. Alfa Romeo
Fullscreen 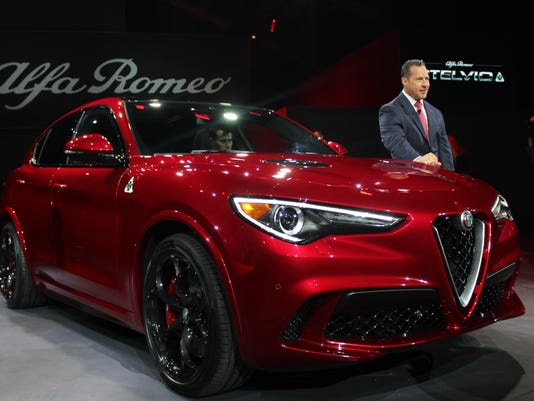 Head of Alfa Romeo Reid Bigland touted the all-new midsize SUV as “the fastest SUV ever,” with a zero-to-60-miles-per-hour time of 3.9 seconds and a top speed of 177 mph thanks to a Ferrari-derived 2.9-liter, bi-turbo V-6 powering the vehicle’s top-trim Quadrifoglio.

“The all-new Stelvio sets an entirely new benchmark for the SUV segment,” he said during the unveiling, adding the vehicle was “uniquely engineered to challenge two-door sports cars on the track.”

The new 2018 Stelvio is expected to be available beginning early next year in Europe, followed by the United States in the second quarter. It’s the second of eight all-new vehicles planned for the Italian make that is re-entering the U.S. market after a two-decade absence. The first was the midsize Giulia sedan, which is expected to arrive stateside next month.

The SUV is named after one of the greatest driving roads in the world — the Stelvio pass in the Italian Alps.

“You might say Alfa Romeo is the opposite of the autonomous driving movement. At Alfa Romeo we want people to become actively, physically and emotionally engaged,” Bigland said. “At a time when the thrill of owning a luxury car seems to be fading, we believe Alfa Romeo offers a welcomed alternative.”

But earlier this year in its most recent update, Fiat Chrysler backed off the Alfa timeline, saying the products would be done by mid-2020. Sales expectations weren’t provided.

IHS Markit senior analyst Stephanie Brinley said as Alfa aims to re-establish itself here, it needs product. The Giulia sedan, which begins launching next month, and the Stelvio give them volume in the compact luxury sedan segment and growing luxury SUV space, she said.

Industry forecaster IHS Markit expects the Giulia and Stelvio will account for about 72,000 sales globally by 2019. The U.S. market would be about 30 percent or 21,600, according to IHS.

The Stelvio is expected to compete with the sporty, up-market Jaguar F-Pace and Porsche Macan. Stelvio pricing has not been announced and Fiat Chrysler did not provide fuel economy estimates.

Available in three trims, the base Stelvio and next-level-up Stelvio Ti models have a new, 2-liter turbocharged aluminum engine mated to an eight-speed automatic transmission. The engine delivers 280 horsepower and 306 foot-pounds of torque, allowing a top speed of 144 mph.

“There is no mistaking the rich Alfa Romeo DNA in the Stelvio’s seductive Italian design,” Bigland said.

All Stelvio models get a Q4 all-wheel-drive system. Much of the SUV’s body is made from aluminum, including front and rear frames, brakes, doors and fenders.

Alfa says the SUV is designed for driving performance. Adjustable driving modes include a race mode for the Quadrifoglio.

Buyers will be able to customize their Stelvio by choosing from 13 exterior colors, seven types of wheels ranging from 18 inches to 21 inches, and different interior colors.

Brinley said it will be several years before the verdict is in on Alfa’s success in the U.S. More than 150 U.S. dealers sell Alfa Romeos.

“American drivers are still getting to know the Alfa Romeo brand, and the introduction of the Stelvio is the best way to gain exposure to consumers in the bustling premium utility segment,” said Eric Lyman, chief analyst and vice president of industry insights at TrueCar Inc. “Luxury utilities are less about functionality than styling and on-road dynamics, both of which Alfa Romeo can deliver due to a rich heritage in performance racing.”

The 4C roadster was the first model the brand offered when it re-entered the U.S. It went on sale in limited numbers in 2014. Sales of the 4C have been slow in the U.S., with the just 434 sold through October this year.