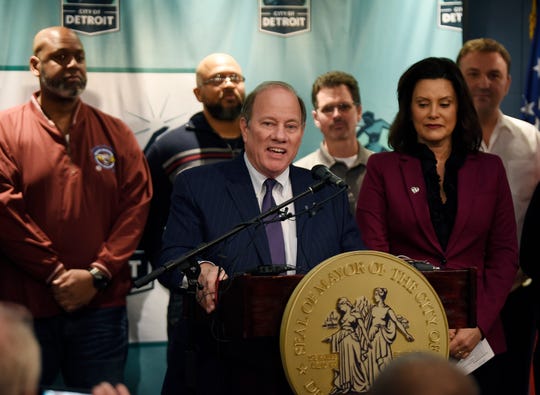 The automaker confirmed plans Tuesday to revive a previously idled engine plant on the city's east side as part of a $4.5 billion investment in five Michigan plants. The actions would create about 6,500 new jobs in Metro Detroit, would help solve capacity problems for Fiat Chrysler in North America, and would prepare for future production of electrified Jeep SUVs.

If Mayor Mike Duggan and his team deliver the land, a community benefits agreement, and council approval, Fiat Chrysler would bring nearly 4,000 new jobs to the city to staff the vehicle assembly line. That would be a boon for Metro Detroit, positioning the city and the region to reap economic rewards from FCA's three-year realignment of its lineup around hot-selling Jeep SUVs and Ram trucks.

FCA's plans come as crosstown rival General Motors Co. is moving to idle in January its Detroit-Hamtramck Assembly plant just four miles away, to potentially close three other facilities in the United States and one in Canada as part of a sweeping North American restructuring.

"FCA just became everyone’s darling," said Kristin Dziczek, vice president of industry, labor and economics at the Ann Arbor-based Center for Automotive Research. "GM had some tough decisions to make. These are the right decisions for these companies, and not all companies are going to be in the same part of the plan at the same time. There’s a lot of uncertainty in this environment right now, and each company is going to make a different pathway out of it." 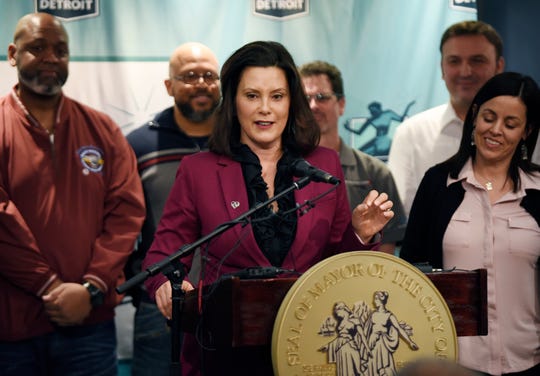 FCA plans to invest $1.6 billion to convert the two plants that comprise the Mack Avenue Engine Complex on the city's east side — including long-idled Mack II — into an assembly plant to build the next-generation Jeep Grand Cherokee, as well as new three-row and plug-in hybrid versions of the highly profitable SUV.

Mark Stewart, FCA's chief operating officer, expressed confidence Tuesday that the city will "get its end done." The automaker wants to launch the Jeep models planned for the Detroit assembly line by the fourth quarter of 2020. Duggan and multiple council members acknowledged they'd be pulling late nights to get the deals done and to assure FCA would build the new plant in the city.

"This is a long time coming," said Councilman Andre Spivey, whose district surrounds the Jeep plant sites. "You could have gone to any greenfield throughout the United States of America. You chose to come here. District Four, roll your sleeves up. We're going to get to work. It'll be a heavy lift, but a lift nonetheless."

The new automotive assembly plant — the first within Detroit city limits since neighboring Jefferson North Assembly Plant opened in 1992 — would add 3,850 new jobs at the facility. Fiat Chrysler's plans to revive the Mack II plant, which has been idled since 2012, and invest in other Metro Detroit facilities were first reported in December by The Detroit News.

Under terms of a Memorandum of Understanding between the Detroit and FCA, city officials must assemble land, craft a community benefits agreement and finalize tax incentives. About a year ago, Duggan said he began discussions about the new plant with former CEO Sergio Marchionne, who died last July — though the mayor first approached Marchionne to secure new investment for FCA's Jefferson North Assembly Plant. 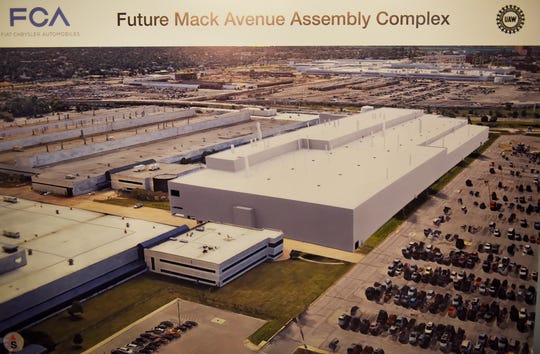 The city plans to give Fiat Chrysler a property tax abatement of about $12 million, the mayor said. The state would offer a larger, as-yet-unannounced tax incentive. But the largest contribution from the city would be the acquisition and delivery of roughly 200 acres of land to expand the new plant's parking, to provide storage for new vehicles, and to allow supplier trailers access to the site.

The targeted parcels are owned primarily by the city, DTE Energy Co., the Great Lakes Water Authority and the Moroun family, among others. No residents would be forced from their homes to expand the engine plant, the mayor said, though the city would close St. Jean Street from Kercheval to Warren to reroute traffic away from the plant.

Also part of the city's commitment to the FCA project: organizing a community benefits agreement agreeable to the city, the automaker and residents; addressing any environmental issues that could exist on land the new plant would occupy; and ensuring approval of the commitments by City Council.

Community benefits agreements have been attached to several recent deals in the city, including Ford Motor Co.'s acquisition of the historic Michigan Central Depot and Ilitch Holdings Inc.'s District Detroit development. They typically ensure that a percentage of new jobs and construction jobs go to Detroit residents, or that the companies train Detroit residents to fill the new positions.

"Some of this is going to be expensive," Duggan said. "That's a lot of work to do. But there's an awful lot at stake. We're going to do this without putting anybody out of their homes."

Michigan Economic Development Corp. CEO Jeff Mason said the state has been discussing incentives with FCA, but was not ready to "reveal the extent of those." Proposed incentives would go before the Michigan Strategic Fund board within the next few months: "We will use the tools available to us already within our toolkit," he said.

Also in Detroit, Fiat Chrysler plans to invest $900 million at its Jefferson North plant to retool for continued production of the Dodge Durango and the Jeep Grand Cherokee. The move would add 1,100 new jobs at that plant for a total of nearly 5,000 new jobs in the city. 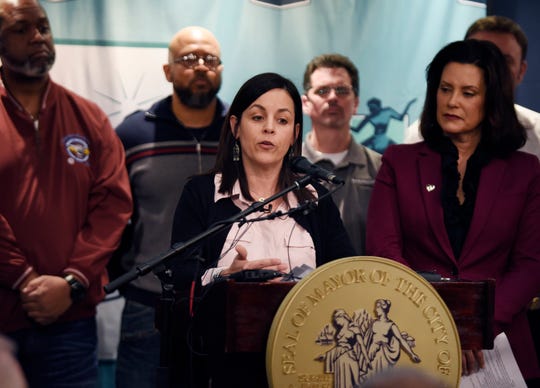 The automaker also confirmed that it is abandoning plans to repatriate production of its Ram Heavy Duty pickup from Mexico to Warren Truck Assembly. Instead, the Italian-American automaker will up its investment in Warren to $1.5 billion from $1 billion announced in 2018 to allow for production of two all-new full-size SUVs: the Jeep Wagoneer and Grand Wagoneer. Production of previous-generation Ram 1500 pickup trucks will continue there. Fiat Chrysler says the moves would add 1,400 jobs.

The automaker will put $245 million into Warren Stamping and $160 million at Sterling Stamping to support the additional production announced Tuesday. Those moves would add more than 80 new jobs at the two stamping facilities. Meantime, FCA also confirmed it plans to cut a shift on May 6 at its Belvidere Assembly Plant in Illinois, home to the compact Jeep Cherokee SUV, displacing 1,371 hourly workers.

The 3.6-, 3.2- and 3.0-liter Pentastar engines currently built at Mack I would be relocated to the Dundee Engine Plant as part of a $119 million investment. Engine production at Mack I is expected to end by fall, the first step in the site's conversion to an assembly plant. 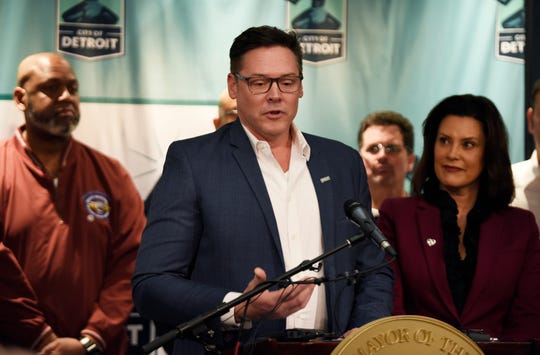 The investments in Michigan are pieces of an effort begun by Marchionne and continued by his successor, CEO Mike Manley, to stoke already strong Jeep brand sales as well as the automaker's other trucks and SUVs.

"(We) continue to invest in Jeep as our core brand," Manley said. "We'll bring Jeep back into what I think is a good segment. For us, the Mack facility is complete white space. So, that opens up, I think, a segment that has grown strongly. We don't have a three-row offering."

The $4.5 billion for the Michigan facilities would enable Jeep plants to build hybrid vehicles, he added, and equip some vehicles with advanced driver-assist features that could handle steering, acceleration and braking while monitoring the road.

Upgrades at the Mack facility would start this spring. The three-row Jeep would hit showrooms in the fall of next year, and would be "quickly" followed by the new Grand Cherokee as well as the Jeep Wagoneer and Grand Wagoneer built at the Warren Truck plant.

The projects are contingent on land acquisition and negotiation of development incentives with the state and with the cities of Detroit, Sterling Heights, Warren and Dundee. The investments in Detroit should boost Fiat Chrysler's exports from Detroit to Europe, the Middle East, Africa and the Asian markets — a potential boon to the city that helped put America on wheels. 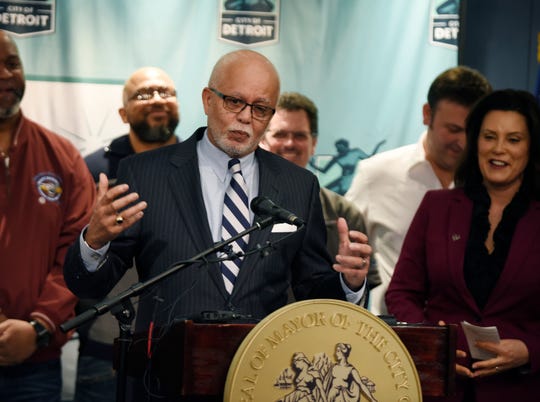 Added Patrick Anderson, CEO of the East Lansing-based Anderson Economic Group: "The re-opening of a ... plant to build new-generation Jeeps is unequivocally good news. It builds on our strengths in Michigan; it leverages great brand values for Chrysler; and it focuses on products that have a well-established market.

"It also underlines what we have been pointing out since GM’s announcement several months ago: the momentum in the auto market is all towards crossovers and trucks, and not electric and hybrid vehicles."