Two weeks after Carlos Tavares in 2013 publicly admitted he wanted to run a major American automaker, the No. 2 executive at France's Renault SA was out. Five months later, he was at the helm of failing Groupe PSA, maker of Peugeot automobiles.

After turning around PSA, Tavares is nearing his goal: He is poised to lead its proposed merger with Fiat Chrysler Automobiles NV for the first five years. The companies are seeking regulatory and shareholder approval in a combination that would create the world's fourth-largest automaker in volume, surpassing Ford Motor Co. and General Motors Co. — the very companies Tavares had dreamed about in the Bloomberg interview in which he expressed his aspirations.

If there is any manager in the automotive world to take on the complex transatlantic job of combining the French carmaker and the Italian American automaker, analysts say, it is Tavares. Transforming these 120-year-old companies for a new era of electrification, mobility and the Chinese market, however, could be another challenge. 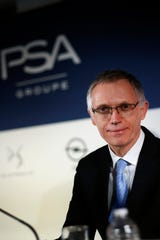 Carlos Tavares' globe-trotting background has given him fluency in English, French, Portuguese and Spanish, and a cultural awareness that gives analysts confidence in his ability to combine Fiat Chrysler and PSA. (Photo: Thibault Camus, AP)

"In total, he really is one of the best managers in the industry," said Jürgen Pieper, senior automobiles adviser at Frankfurt-based Metzler Bank. "He's never avoided a difficult situation."

The 61-year-old CEO, who was not available for comment for this story, is a "turnaround specialist," Pieper says. He built a reputation on restructuring and cost-cutting, and was a pupil of former Renault-Nissan chairman and CEO Carlos Ghosn. Tavares planned to bring PSA to profit in three years; he did it in two. Then in 2017, Tavares took over GM's European business that had lost nearly $20 billion over almost 20 years; in 18 months under Tavares, the German Opel brand and its sister, Vauxhall, were profitable again.

In 2018, PSA's 8.4% operating margin was even the envy of premium brands, Pieper said. Now, Tavares is looking to boost his ambitions to return Peugeot to the U.S. market by bringing Fiat Chrysler with its profit-heavy Jeep and Ram brands into the fold.

But the combined FCA-PSA, whose name has not yet been announced, would boast roughly 400,000 employees producing 8.7 million vehicles annually. By comparison, GM employs 180,000 people to produce 8.4 million units. The companies have said there will be no plant closures as a result of the combination, and brands will continue to be based in the countries from which they originate.

But Tavares could cut 30,000 positions, particularly in engineering and in Europe as a result of the combination, estimates Ferdinand Dudenhöffer, a professor of automotive economics at the Center for Automotive Research at the University of Duisburg-Essen in Germany. The companies intend to combine platforms and said only two platforms will support two-thirds of all vehicles produced.

"He has an engineering center in Auburn Hills, two in Paris — one for Peugeot, one for Citroën — there's one in Turin for Fiat and for Opel in Germany," Dudenhöffer said. "Four engineering centers for two platforms — that is ridiculous."

PSA spokesman Bertrand Blaise did not rule out layoffs but explained Tavares has a systematic way in which he makes decisions to meet goals around market share and profitability.

"We'll see all options," said Blaise, who has known Tavares for almost three decades. "Carlos always believes in facts. He is a fact-based guy. Nothing is irrational ever. He looks at the best use of scarce resources ... Efficiency and agility and teamwork are three values that Carlos defines."

Born in Portugal, Tavares was drawn to cars as a teenager. He volunteered to be a flag steward at the Estoril track in Portugal where he caught the racing bug and began competing. Today, racing remains a favorite outside of his strict 8 a.m. to 6:30 p.m. work schedule; he typically races 25 weekends in a year.

He considered racing professionally, but finding it expensive and the competition stiff, Tavares studied engineering at the prestigious Ecole Centrale Paris in France. He joined Renault as a test engineer in 1981 and gained the attention of CEO Louis Schweitzer. He chose Tavares to develop the Mégane II — a revolutionary hatchback that went on to be voted European Car of the Year in 2003 and be the first small family car to receive the European New Car Assessment Program's five-star safety rating in crash tests.

Ghosn in 2009 selected Tavares to lead Nissan's North American operations. He became chief operating officer in 2011. Only four years younger than Ghosn, Tavares told Bloomberg he would have to leave Renault-Nissan in order to lead an automaker.

When Tavares joined the struggling PSA in 2014, many of the hard tasks were done, said Philippe Houchois, a London-based analyst at Jefferies Group. It had received a bailout from the French government and China's Dongfeng Motor Corp. His predecessor cut more than 11,000 jobs, including the difficult task of closing a plant in France. But Tavares showed his strengths in management and increasing plant efficiencies, Houchois said.

"That's been his philosophy for the past several years: He's focused on allocation and profitability," Houchois said. "He's focused on pricing and the allocation of capital. He's not going to propose something if he's not predicting it will be profitable."

"He is a tough but also a pretty fair cost-cutter," Pieper said. "It's not easy to get along with strong unions, and he manages to do so." Fifteen of 17 trade unions on PSA's European Works Council provided a favorable opinion of the merger with Fiat Chrysler.

Tavares' spending discipline is more than a business practice — it's a way of life. Analysts described him as the worst-dressed automotive CEO, preferring off-the-rack suits over custom-tailored ones. He is known to use budget airlines and to shun luxury hotels and chauffeured cars. Domestically, he typically flies economy, though his mileage often gets him bumped up, said Carla Bailo, CEO of the Center for Automotive Research in Ann Arbor, who worked under Tavares at Nissan for almost eight years.

"Frugal is one of his favorite words," she said. "Frugal is the mindset in every facet of his being."

And it does not always mean at the expense of quality, Pieper said. The first Opel and Vauxhall vehicles designed on the Peugeot platform are coming to market with electrification options and new automated features such as lane-assist.

Tavares' globetrotting background has given him fluency in English, French, Portuguese and Spanish, and a cultural awareness that makes analysts confident in his ability to combine Fiat Chrysler and PSA.

Tavares has a hands-off approach to management, they said. PSA doesn't have a chief operating officer. Tavares sets the goals for leaders of brands and geographic regions to meet, Bailo said. Like the late CEO Sergio Marchionne, he can convey a vision and get the job done, she said.

"He's very demanding in terms of accuracy and in terms of putting plans and the correct processes and procedures into place, and following those," Bailo said. "He has a very clear aim and clear objectives and clear roadmaps for how to achieve them."

"He's not a tyrant in any way," Bailo said. "He's more of a mentor and guide. He's there to guide the talent that already exists. He manages to bring out the best in people."

Tavares has not been successful in every endeavor. Premium brand DS Automobiles has failed to gain much traction since it split from Citroën in 2009. And since Tavares took over, PSA has lost sales in China, the world's largest auto market — a region where Fiat Chrysler also is weak.

Developing a plan in China will be an ongoing discussion once the merger closes, Tavares previously said: "It is fair to say we didn't so far achieve big success in China. ... We will leverage the size and capabilities of this enlarged company to bring to China perhaps a more efficient way of doing business that we so far have not achieved."

Fiat Chrysler and PSA also have said combining will allow them to leverage investments across a larger scale to develop mobility solutions and technologies related to autonomous, connected and electric vehicles. But whether Tavares could be a leader in this space remains to be seen, experts said.

"PSA is certainly not a leader in any technology," Metzler Bank's Pieper said, though he added most automakers still aren't building their own batteries for electric vehicles and companies are slowing their efforts to deploy self-driving technology.

"No company has really lost so far. OK, Fiat Chrysler from all perspectives is behind most of all. Peugeot is certainly not one of the leaders, but it's not a loser either."

The combination with Fiat Chrysler seeks to ensure that it doesn't become one either, PSA's Blaise said: "Carlos Tavares always goes against the