A shift extension to June 29 is the fourth new deadline granted to the 1,500 employees working in the minivan plant

Fiat Chrysler Automobiles NV said Thursday it will cut the third shift at Windsor Assembly this summer as it begins to phase out production of the Dodge Grand Caravan.

The June 29 deadline is the fourth new deadline granted to the 1,500 employees working in the minivan plant. It comes as the company "works to align volumes with demand while phasing out production of the Dodge Grand Caravan at the end of May," FCA spokeswoman Jodi Tinson said in a statement. 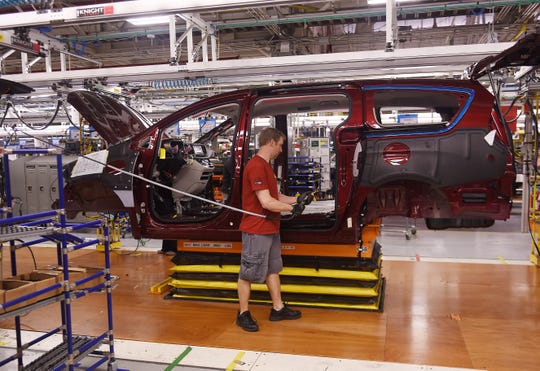 The vehicle is the Italian American automaker's best-selling minivan in the United States. The company earlier this month said the Chrysler Voyager would replace the Grand Caravan. The Voyager is the name adopted starting for the 2020 model year of low-end Chrysler Pacificas. The change clarifies Chrysler as the "people-mover" brand while Dodge, anchored by the Challenger and Charger muscle cars, focused on performance vehicles.

Leaders of the labor union that represents Canadian auto workers at the Windsor plant said the would continue to fight for the employees. The Unifor contracts with the Detroit Three automakers expire in September.

“We will Not stop," Unifor Local 444 posted on Facebook. "We are going to do every Damn thing we can to get everyone back to work! “

David Cassidy, the local's president, said in a video posted to Facebook that he had met with CEO Mike Manley and the heads of human resources and manufacturing.

"The official sundown of the Dodge Caravan, as most people know is going to be May 22," he said. "Obviously, our feeder plants potentially could be affected before June 29."

Tinson said Fiat Chrysler was unable to speak to the potential impact on suppliers.

The company represented about half of U.S. minivan sales last year, which have shrunk to roughly 400,000 vehicles from 1.2 million in 2005, according to auto information website Edmunds.com Inc. In 2019, Fiat Chrysler sold 122,648 Grand Caravans in the United States, a 19% year-over-year decrease, compared to 97,705 Pacificas, a 17% decline.

The automaker originally said last March it was eliminating Windsor's third shift and laying off its employees on Sept. 30. It later extended that into October because of a fleet order. In November, Fiat Chrysler made the deadline the end of March, though the plant idled for two weeks in January. The plant went from two shifts to three in 1993.

Fiat Chrysler earlier this month revealed the 2021 redesigned Chrysler Pacifica during the Chicago Auto Show, reintroducing all-wheel drive for the first time on the minivan since 2004.