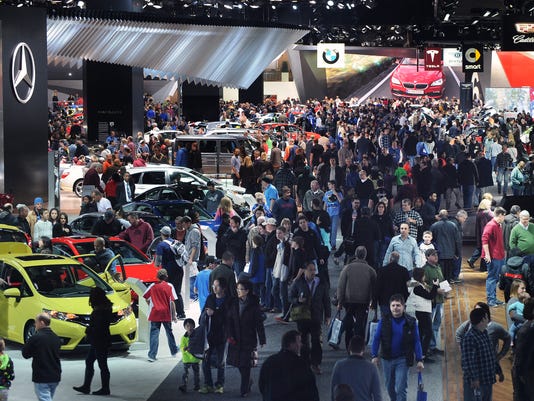 Car buyers roam the aisles checking out the vehicles, interactive exhibits and sights of the auto show.(Photo: Brandy Baker / The Detroit News)Buy Photo

From most earth-friendly to most awesome off-roader to the sexiest vehicle, Detroit News readers have been outspoken in their appreciation of the finest the auto show has to offer.

For the 12th year, readers will get their say during the annual Detroit News Readers' Choice Awards, presented today during the Detroit Economic Club luncheon at Cobo Center.

"It's the only award given by the customers who actually drive these cars," said Henry Payne, Detroit News Auto Critic, who will be announcing the awards. "This is the populist award with customers themselves saying what are the best cars on the show floor."

During the first few days of the North American International Auto Show, the show floor belongs to the press. Public days opened up Saturday. More than 1,000 people applied to become judges for the choices, and 100 were chosen to tour the auto show on Wednesday, the first day of the industry preview. The judges were able to vote on their favorites in 10 categories that range from practical choices for families and innovation to sheer eye candy appeal.

The awards will be presented during the annual meeting of the Big Four, the heads of Macomb, Oakland and Wayne counties as well as the Detroit Mayor. Mark Hackel, L. Brooks Patterson, Warren C. Evans and Mike Duggan will join together for a panel discussion on industry and investment in the Metro Detroit region.

The Detroit Economic Club has been hosting the meeting for the last five years during the auto show.

"It's been a real favorite for the members of the club to host the Big Four at the beginning of the year because it shows us what the region is going to be like for the year," said DEC spokesman Matt Friedman. "It happens at the same time as the auto show which is a great time for optimism in the community."