An eye-catching red Acura Precision Concept debuted to the world automotive press Tuesday at the Detroit auto show, a year after the brand’s soon-to-arrive Acura NSX supercar was among the show’s stars. 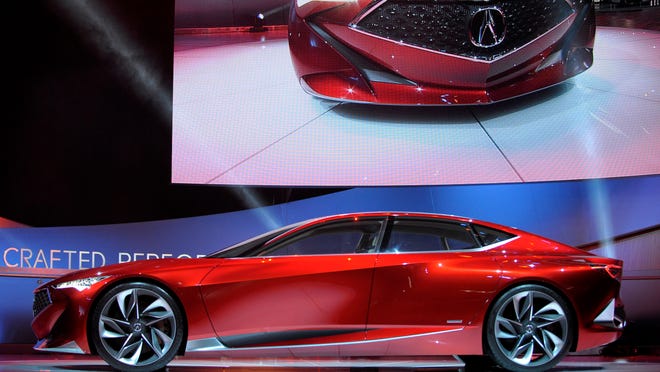 The Precision Concept, with its long V-like pointed hood, sweeping design lines and low, muscular stance, is all about the future direction for Acura design, which the luxury brand says will be bolder.

The fast-looking four-door concept has what Acura calls “quantum continuum” to transition materials and vehicle structure from the exterior inside. The vehicle, which marked its global debut at the North American International Auto Show, lacks a B-pillar, between the door and backseat.

The Acura Precision Concept comes at a significant time for the marque. This March, Acura will celebrate its 30th anniversary. When it debuted in 1986, it raised plenty of eyebrows as the first attempt by a Japanese manufacturer to directly take on established European and American luxury brands.

Early models, such as the Legend and Integra, quickly carved out a unique niche but in more recent years, Acura has been accused of losing its way, which even company officials don’t completely deny.

Hachigo called Acura one of the highest priorities for global Honda and that the company is investing heavily into the luxury brand.

Acura intends to use parts of the design study to shape future Acura vehicles. Dave Marek, Acura global creative director, said the Precision Concept’s grille will make its way onto Acura products “not too far into the future.”

“Some things are way out, some closer,” said Jon Ikeda, a former advanced designer who now is vice president and general manager of the Acura Division, adding that, “We’ve got to dream big.”

Ikeda said in December that Acura must improve its sedan lineup, and he said it is important to show performance in vehicle style.

The wide and low-standing concept features a new diamond pentagon grille. The Precision Concept is 204 inches long and 84 inches wide. Its wheelbase is 122 inches and the car rides on 22-inch wheels and tires.

Lighting also is advanced, with jewel constellation LED headlights in the front and floating LED taillights in the rear. Inside, the car features a sports steering wheel with paddle shifters and a heads up display for the driver.

Acura describes the rear seats as “floating” and thin. The show car features plenty of high-tech gear and gadgets, including the curved central video display that can provide driver data as well as entertainment. A smaller display, not much bigger than an iPhone 6-Plus, rides above the steering wheel.

The concept showcases a human-machine interface concept for Acura, featuring the curved center screen that is controlled by a floating touch pad suspended on the center stack. When a driver and passengers enter the vehicle, the system “scans each occupant and selects personalized features and functions, including maps, audio and customized vehicle performance settings.”

The Precision Concept was developed by Acura’s design studio in California under direction from the same designers who led the NSX project.

Acura had its best U.S. sales last year since 2007, selling 177,165 vehicles. that was up 5.6 percent from 2014 and marked the brand’s fourth straight year of sales growth. The brand currently has five vehicles in its lineup — three sedans and two SUVs — and this spring will add the long-anticipated 2017 NSX supercar with a starting price tag of $156,000.