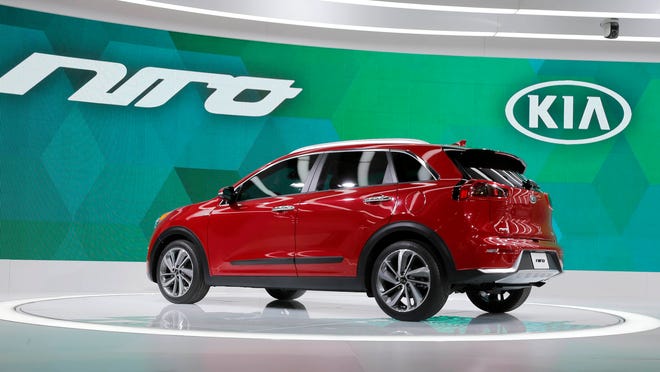 Chicago — Pickup debuts dominated the way at the 2016 Chicago Auto Show, but with new sport utilities from Kia and Nissan, they weren’t the only vehicles driving the news.

Here are the Top Three premieres at America’s largest consumer show, which is open to the public through Feb. 21.

With a targeted combined 50 miles per gallon, the all-new Niro hybrid crossover appears to be the flagship of the Kia brand’s fuel-efficient lineup, which is expected to increase to 11 vehicles by 2020.

The company is touting the vehicle, which will arrive in U.S. showrooms in early 2017, as a no-compromise hybrid that is expected to compete head-to-head with the Toyota Prius, the matriarch of the hybrid segment.

Kia also debuted the 2017 Optima Plug-in Hybrid and 2017 Optima Hybrid, which are both expected in dealerships this summer.

Nissan Motor Co. took the wraps of its all-new 2017 Armada full-size sport utility vehicle on the eve of the show.

The second-generation flagship SUV is bigger and bolder than the previous generation. Unlike the original Armada, which was based on the Titan pickup, the new offering is based on the body-on-frame Nissan Patrol and Infiniti QX80 SUVs.

Nissan also announced that a new version of its Titan full-size pickup will be arriving in showrooms this summer. The company showed photographs of its all-new “standard” Titan pickup at the show.

Ram Trucks added the tagline “America’s off-road truck leader” at the show with the debut of an updated Power Wagon as well as a new 4x4 Off-Road Package for its Ram 2500 Heavy Duty pickup. The automaker showed off a bit of the Power Wagon’s capability by have having it scale down a tiered platform.

The 2017 Power Wagon most notably receives new exterior and interior redesigns, including an all-new tailgate and prominent grille with silver “RAM” lettering based off the Ram 1500 Rebel model that debuted in 2015.

The Power Wagon is is expected to arrive in dealerships toward the end of the year.