For $200K, you’ll be able to park this 2-person drone in your garage

Unlike a traditional helicopter, the motors are electric, drawing power from a battery and an internal combustion engine that doubles as a generator.

For $200K, you’ll be able to park this 2-person drone in your garage 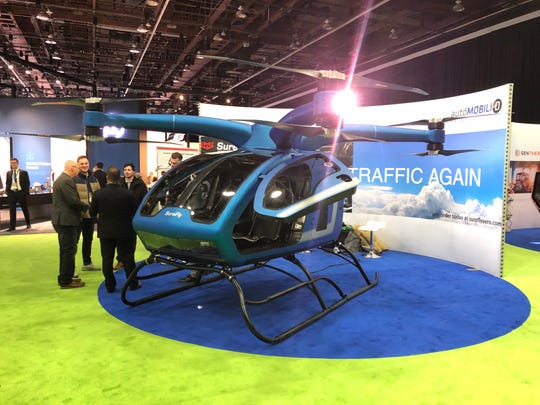 The Surefly Octocopter on the floor of the Detroit auto show (Photo: TheDetroitBureau.com)

It’s not quite the era envisioned in the dark sci-fi film, "Bladerunner," but we seem to be approaching an era when American skies could soon be filled with flying cars and taxis.

And a small start-up making its first appearance at this year’s North American International Auto Show in Detroit is hoping to be the first to take wing.

The Octocopter looks a lot like the popular drones marketed by DJI, with four arms holding its motors. In this case, there are actually two motors on each arm, or eight total, improving both stability and safety, Burns explains. They provide enough power to propel you through the air at 75 mph for up to 75 miles.

Unlike a traditional helicopter, the motors are electric, drawing power from both a 6.5 kilowatt-hour battery and an internal combustion engine that serves as an onboard generator. It can run on either diesel or jet fuel. Standing alongside the SureFly at its resting point inside Cobo Hall, Burns explains that he’d like to go completely electric but today’s batteries are simply too heavy and wouldn’t be able to provide the range. Plus, you can land and refuel without having to find a place to plug in.

The battery could be eliminated entirely but it provides enough energy to let the Octocopter safely land in the event of a failure by the generator-motor.
All told, the SureFly can lift up to 400 pounds, though Workhorse also is developing a military version that could boost that to 650 pounds.

Weight is a significant factor when it comes to getting airborne, and to maximize performance, engineers turned to super-light, ultra-strong carbon fiber for most of the SureFly’s body, arms and even its rotor blades. Aluminum, however, is used for the landing skids as it would be more forgiving in a hard landing.

That said, Workhorse intends to make the Octocopter both safe and easy to fly. Unlike a conventional helicopter that requires a pilot to use both hands and feet to keep it flying safely, there are really only two controls in the SureFly. One controls your speed, the other is a computer game-style joystick that, says Burns, “you just point where you want to go.”

The onboard computer system keeps you flying straight and level, each of the eight motors subtly adjusting speed as often as five times a second. “We hope to prove this is safer to take to a destination than to drive there,” says Burns. That’s something he’ll need to prove to the FAA as part of what is expected to be a two-year certification process that began in the middle of last year.

While there are other companies working up flying drones — including Bell, the helicopter company that showed off its five-seat Uber taxi at the Consumer Electronics Show last week, “Our goal is to be the first to win FAA approval,” Burns says.

If all goes according to plan, the Surefly Octocopter could be back at the June 2020 North American International Auto Show ready to fly.

The price is targeted at $200,000 once the craft gets into production. Burns says his company has already begun taking orders, potential buyers being asked to put down a $1,000 deposit. He declined to say how many folks have already signed up, however.

But the CEO did say that Workhorse has had plenty of inquiries from firefighters, farmers, the military and from those who simply like the idea of cutting their commutes by taking to the air.