The new pickup gets between 5%-29% better fuel economy. 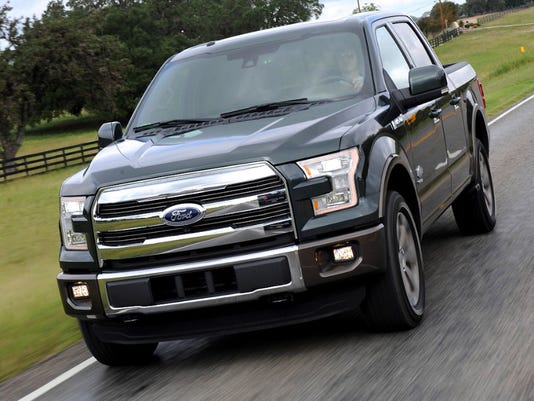 Dearborn – — Ford Motor Co.'s 2015 aluminum-bodied F-150 won't surpass the Ram EcoDiesel as most fuel-efficient pickup, but its 26 mpg on the highway is tops among all gas-powered full-size pickups.

The Dearborn automaker on Friday released mileage numbers that are between 5 percent and 29 percent better than last year's model, depending on engine size.

Equipped with the new 2.7-liter EcoBoost engine, the highly anticipated pickup can get 19 mpg city, 26 mpg highway and 22 mpg combined. Ford expects this new engine option will account for about 28 percent of new F-150 sales once trucks hit dealer lots in the coming days. The most fuel-efficient 2014 F-150 was rated at 23 mpg on the highway.

Before Friday's numbers were released, the 2015 Ram 1500 was the leader among gas-engine trucks, getting up to 25 mpg on the highway. The 2015 Chevy Silverado can get up to 24 mpg highway.

Other trucks, like Ram's EcoDiesel and Chevy's mid-size Colorado, can get even better mileage numbers.

"We set out to create the future of tough with the new F-150," said Raj Nair, Ford vice president, global product development. "We are delivering with the toughest, smartest and most capable F-150 ever — and now the highest EPA-estimated fuel economy ratings of any full-size, gas-powered pickup in America."

Ford said fuel economy isn't the only thing that matters to its truck customers, and suggested its better capability — it can tow up to 1,100 pounds and haul up to 530 pounds more than the last model — and price point were just as, if not more important than, the mileage numbers. Before the mileage numbers were released, some analysts had predicted the lightened truck could reach 30 mpg.

"That line of thinking was more media-driven than truck customer-oriented," Doug Scott, Ford's truck group marketing manager, told reporters Friday. "Truck customers that really value the payload and towing benefits that are associated with lightweighting, as well as durability, understood when we said we'd take the weight out and reinvest it. They're not just singularly focused on fuel economy."

Nair said Ford has the capability to offer a diesel option, but has no plans to do so. He said the automaker will offer a hybrid F-150 by the end of the decade.

"At this point, fuel economy numbers are as much of a marketing game than anything," Akshay Anand, analyst for Kelley Blue Book, said in a statement. "The 'best truck mpg' claim probably matters more than the cost-savings from a 1 or 2 mpg difference over competitors, especially if gas prices remain low for the foreseeable future. We know some of the import trucks will be released in the next year or two, and you can bet those will have solid mpg numbers, especially as diesel looks to gain more traction in the truck segment."