The No. 67 car was stuck in sixth gear while the No. 66 car faced engine and braking issues

The No. 67 GT was just nine laps into the 24-hour endurance race when driver Ryan Briscoe lost significant speed and had to pit with the shifting issue.(Photo: Michael Martinez / The Detroit News)Buy Photo

Ford has begun to take orders for its GT supercar, which will be priced in the mid-$400,000s. Above: A GT in Ingot Silver, with a Competition Orange stripe. Ford Motor Co.
Fullscreen

The car will be powered by a 3.5-liter V-6 EcoBoost engine that produces more than 600 horseppower. Above: A GT in Frozen White, with a Race Red stripe. Ford Motor Co.
Fullscreen

A GT in Matte Black. Eight exterior colors can be paired with one of seven different stripe colors. Ford Motor Co.
Fullscreen

The teardrop-shape carbon-fiber body is the result of extensive work in the wind tunnel. Ford Motor Co.
Fullscreen

The street version of the Ford GT, which goes on sale in very limited quantities later this year, got plenty of attention last year at the 2015 North American International Auto Show. Max Ortiz, The Detroit News
Fullscreen

The street-version supercar is powered by a 600-horsepower 3.5-liter EcoBoost engine, which has similar architecture to engines on other Ford vehicles like the F-150. Ford Motor Co.
Fullscreen

Ford will limit production of the supercar to 250 a year. Ford Motor Co.
Fullscreen

On the Ford GT supercar, every slope and shape is designed to minimize drag and optimize downforce, and each surface on the GT is functionally crafted to manage airflow. Ford Motor Co.
Fullscreen

The Ford GT serves as a test bed for technologies, lightweighting techniques and features that could become commonplace on future vehicles throughout Ford's lineup. Charles V. Tines, The Detroit News
Fullscreen

The Ford GT's unveiling last year prompted a number of tweets from Detroit Tigers pitcher Justin Verlander, who has been appreciative of the GT's features and has asked how to buy one. Todd McInturf, The Detroit News
Fullscreen

Ford's application wants to know about any vehicle-related charitable activities or contributions; if the applicant is a car collector, and if so, how many Fords and Lincolns are in their collection; and if the applicant is a public figure such as a professional athlete, TV personality or a member of the motorsports community. David Coates, The Detroit News
Fullscreen

The GT's Gorilla Glass windshield is 12 pounds lighter than a traditional windshield -- a 30 percent weight savings -- and is scratch-resistant. Daniel Mears, The Detroit News
Fullscreen

Ford Performance marketing manager Henry Ford III said the company knew it wanted to return to the race for the 50th anniversary of the Le Mans win after realizing they could build both a successful race and street version of the vehicle. Todd McInturf, The Detroit News
Fullscreen

The racing version of the GT returned to the racetrack in 2016 for the first time since 1969. It competed Jan. 30-31 in the Rolex 24 at the Daytona International Speedway. Ford Motor Co.
Fullscreen

Ford raced two GTs (the No. 66 and No. 67) alongside two prototype vehicles in the Daytona event. Bryan Mitchell, Special to The Detroit News
Fullscreen

At Daytona, braking issues, blown tires and faulty transmissions forced the two GTs back into the garage for hours of the marathon event. Ford Motor Co.
Fullscreen

The new Ford GT race car will be campaigned by Chip Ganassi Racing, and will compete in June in the 24 Hours of Le Mans in France. Ford Motor Co.
Fullscreen

At the 1966 24 Hours of Le Mans race, two Ford GT40 Mark II cars were close at the finish line, with the Bruce McLaren and Chris Amon car declared the winner. It was the first win at Le Mans for an American car. Ford Motor Co.
Fullscreen 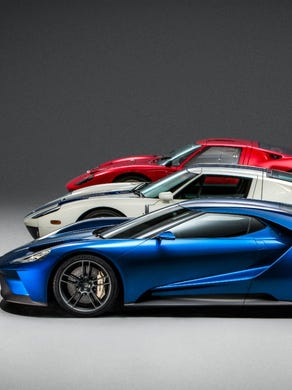 The all-new Ford GT, front, along with the 1966 Ford GT40, back, and the second-generation Ford GT Number One, middle. Ford Motor Co., Ford Motor Co.
Fullscreen

The No. 66 car started out of the gate well; It held the class lead for three minutes early and sat in third place an hour into the race. But the No. 67 car encountered problems 16 minutes in.

In its ninth lap, driver Ryan Briscoe lost significant speed and had to pit with the shifting issue. Pit crews worked on the car for about five or 10 minutes before it was taken back into the garage where Ford Performance executives including Raj Nair, Dave Pericak and Henry Ford III and team owner Chip Ganassi watched the team work on the issue.

Later in the race, the No. 67 car’s right rear tire was cut in two different instances due to a damaged diffuser rubbing on the tire and was forced to pit both times.

After its early position at the top of the pack, the No. 66 car came in for a routine pit stop to change tires and refuel. While changing tires, a brake line was damaged, causing the car to remain in the pit for just under 10 minutes. After the team replaced the brakes, Hand went back out on the track only to have engine issues moments later and had to re-pit. Both problems put the No. 66 car six laps down.

Later, the No. 66 car was forced off the track and into the garage for the same shifting issue that troubled its sister 67 car. A Ford Performance spokesman said the issue for both cars was with the same component in the control system of the transmission. Its transmissions are made by supplier Ricardo and have never given the racing GTs trouble before.

By the second hour of the race, the GTs had fallen into 10th and 11th place out of 11 total vehicles competing in the GTLM class. Six hours into the race, the cars remained last in their class as the No. 66 car was 51st out of 54 total vehicles, and the No. 67 car was 47th.

When the GTs were on the track, however, they were running well. As of the sixth hour, German driver Stefan Mucke of the No. 67 GT held the fastest lap time of 1:44.391.