“As you make things better, materially, technically or efficiently, we’re losing track of human use,” Hackett said Wednesday at the Michigan Council of Women in Technology Foundation’s executive connection summit. “Remember that the bigger issue for us is that you’re managing this gap, because that ensures human adoption.”

Hackett spoke at his first big public appearance as head of the Dearborn-based automaker. The former Steelcase Inc. CEO, former chair of Ford’s subsidiary Ford Smart Mobility and former University of Michigan athletic director spoke for 45 minutes about the necessity for any technological advancements made at Ford to “augment” the human experience. The comments come just over a week after Hackett was appointed to better communicate Ford’s plans for the future, among other reasons.

He said that he’s pushing Ford employees to think about products in “ways we only imagined,” that will bring about true, extended use – not just fads that come and go. If new products or systems like the autonomous vehicles Ford intends to have on the road by 2021 – or the “connected” cars, electric vehicles and ride-sharing services – don’t do that, they’ll fail, Hackett said.

“(Technology) has made human life and human experience augmented in ways that we never expected,” he said. “Technology is designed by humans for use by humans, and therefore it unlocks the power of humanity.

“You aren’t going to get people to adopt a new tech or a new idea unless it’s actually augmenting.”

It was a refreshed line of speaking from the new head of the Blue Oval, who was put in place, according to comments made by Executive Chairman Bill Ford Jr., in order to modernize the nearly 114-year-old automaker by developing new business.

Bill Ford wants Hackett, the tech-talking “change agent,” to “re-energize” the company by moving faster than his predecessor, Mark Fields, in realigning the business to maximize growth amid expansion into new markets such as self-driving vehicles, electrification and mobility — sectors in which profits eluded Fields.

The man with his name on the vehicles wants a clear way forward for the automaker as it transitions into an auto-and-mobility company.

And Hackett is already signaling a change. Speaking Wednesday, he drew anecdotes from late Apple Inc. Founder Steve Jobs and other Silicon Valley giants to illustrate his points. A week into the job, Hackett communicated how Ford can succeed, and the way in which the automaker is studying innovations and new technology on its current and future vehicles.

Ford will make the right decisions, Hackett said while fielding questions from his newly appointed President of Mobility Marcy Klevorn.

And, he said, the company won’t trip over itself trying to be first out of the gate with new technology.

Klevorn and Hackett also touched on the importance of diversity in the workplace. Hackett said a company with a better mix of men and women — and different cultures — across all positions has “more sense” and a competitive advantage.

“There’s just nothing more important” than diversity,” he said. 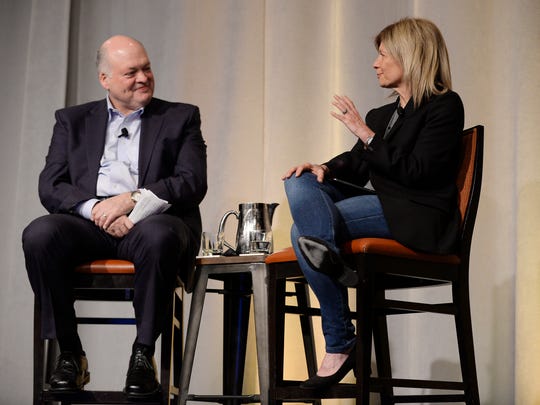 Ford's CEO Jim Hackett and President of Mobility Marcy Klevorn discuss mobility during a conversation at the Michigan Council of Women in Technology Foundation conference at the Suburban Collection Showplace in Novi Wednesday. (Photo: Clarence Tabb Jr., The Detroit News)

The comments come as Ford invests what’s estimated to be over $1 billion to renovate its Dearborn campuses to attract younger, tech-minded engineers and technicians and compete with Silicon Valley competitors like Apple and Google, Intel and Qualcomm.

But for most of the talk, the new CEO spoke elegantly about how technology impacts human lives, and how Ford needs to hone in on the human aspect to create the life-changing technology in the mobility sphere that Bill Ford has been pushing for since his 2011 “A Future Beyond Gridlock” TED Talk.

Bill Ford said then that the current model for transportation beloved in the U.S. will not work across the world. Things need to change.

The auto industry “is now in flux, and it’s been in flux,” Hackett said Wednesday. “From a human perspective, we need to be mobile, and yet the design historically will not work.”