The company will temporarily layoff hourly employees there until Oct. 22 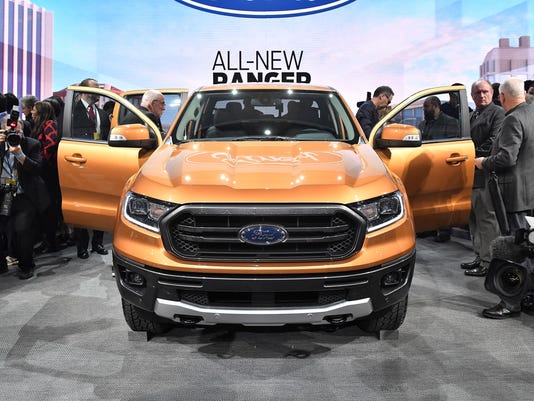 After an eight-year absence, Ford’s Ranger pickup -- shown here at the North American International Auto Show at Cobo Center in Detroit on Jan. 14, 2018 -- is heading back to U.S. showrooms, hoping to pick up on the midsize truck revival. Set to be built at the Wayne, Michigan assembly plant, the new Ranger is a specially modified version of the pickup launched in pretty much every other world market.(Photo: Robin Buckson / The Detroit News)Buy Photo

Ford Motor Co. will temporarily lay off 2,000 hourly employees at Michigan Assembly and Stamping Plants in Wayne in early May to retool the facility for production of the 2019 Ford Ranger and 2020 Ford Bronco there.

The temporary layoffs will last until Oct. 22, according a Worker Adjustment and Retraining Notification Act (WARN) notice obtained by The Detroit News.

Ford spokeswoman Kelli Felker said in a statement late Friday that the temporary closure will not eliminate any jobs. Employees with a year seniority will receive roughly 75 percent of their take-home pay during the layoff period, which lasts from May 7 to Oct. 22, according to the notice.

“This is a temporary measure as we undertake extensive retooling to transform the plant to build the Ford Ranger, followed by the Ford Bronco,” Felker said. “The affected employees all will return to work — either at Michigan Assembly or at another Ford facility.”

In an interview at the Detroit auto show, Joe Hinrichs, Ford president of global operations, told The Detroit News that the plant was “getting back to its roots” by retooling for the truck and SUV. He said then that employees at the plant were excited to build those two iconic nameplates.

The Dearborn automaker announced roughly a year ago that it would invest an additional $150 million at Michigan Assembly above investments negotiated as part of the 2015 United Auto Workers contract. Negotiated as a part of that contract was a $700 million investment to retool the plant for truck and SUV production.

The retooling comes as Ford pushes to grow its share of the lucrative SUV and truck market. Though the F-150 has been the best-selling truck in the U.S. for decades, the Blue Oval is reviving the Ranger in early 2019 to re-enter the midsize truck market it left in 2011.

The new Bronco, about which the company has not revealed many details, will join Ford’s SUV lineup at a time when U.S. consumers desire bigger vehicles.

To make room for those storied nameplates, Ford is removing the Focus and C-Max cars currently built in Wayne. The next-generation Focus will be built in China and exported for distribution to U.S. showrooms. The company has not said what will happen with to the C-Max, though there has been no announcement about where the vehicle will be made once Michigan Assembly begins the retooling process.

United Auto Workers representatives could not be reached Friday afternoon for comment on the retooling.