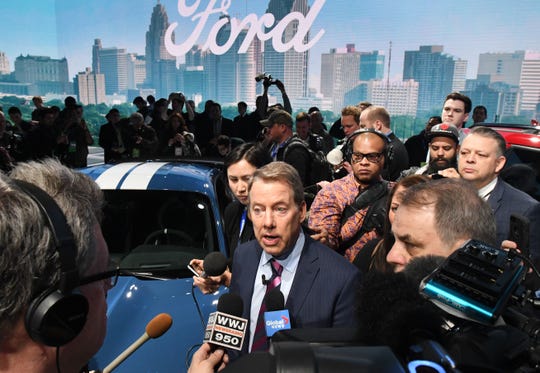 The automakers are expected to at least announce official plans to partner on joint production of commercial pickup trucks, The Detroit News reported Friday. Ford officials in the last week have said partnering in Europe could be a boon to Ford's commercial vehicle business there.

The automakers have been in talks since at least June regarding a partnership on commercial vehicles. Those discussions expanded. The companies are still negotiating a partnership along with Argo AI, the autonomous driving technology company in which Ford has an ownership stake, to partner on autonomous vehicles.

The automakers have also talked about partnering on electric vehicles. VW announced plans to invest more than $800 million into a second plant in Chattanooga, Tennessee, to build electric vehicles. The facility is a part of VW's e-mobility future in the United States and will create 1,000 new jobs. The first electric vehicles are expected to roll out in 2022 from VW.

Joe Hinrichs, Ford president of global operations, told The Detroit News on Monday that Ford is in a transition period with powertrains. The industry is moving from combustion engines to a greater mix of electric and hybrid vehicles.

"It's been slower than people predicted 10 years ago or five years ago, but it's coming," Hinrichs said. "We know it's coming. We think that it's important for the customer use cases that we offer them choices."

Ford and VW are expected to continue negotiating pieces of the partnership after the companies offer some clarification on the status of things Tuesday.

The automakers are not merging, both Ford and VW officials have said. That has never been part of the talks.

The automakers signed a memorandum of understanding last summer to look into partnering on commercial vehicles, Ford's best-seller in Europe. Pickups are a weak spot for VW, which vies annually to be the global leader in vehicle sales.

Diess said after a White House meeting in December that he might use Ford plant capacity in the U.S. to build cars. Ford said then the discussions were progressing well.