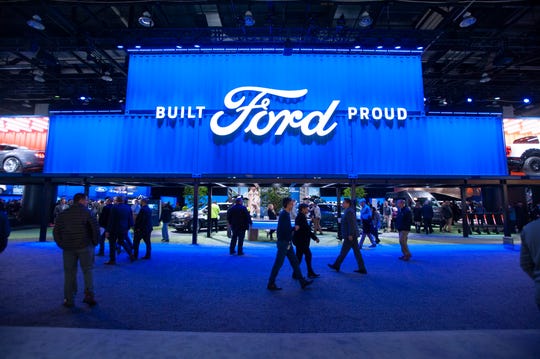 People check out the vehicles and other attractions in the Ford Motor Company exhibit space at the North American International Auto Show at Cobo Center. The company said Wednesday that profit-sharing checks would go out March 14. The amount is based on North American earnings, which was $7.6 billion before interest and taxes in 2018. (Photo: John T. Greilick, The Detroit News)

Dearborn — Ford Motor Co. made $3.7 billion in 2018, a 52 percent slip in profit compared to the year prior, due largely to poor performance from the company's Chinese and European businesses.

"It's not a year that we were happy with," Ford Chief Financial Officer Bob Shanks said Wednesday. "The thing that we're really excited about looking back on the year, it was a year that we suffered all of the headwinds... (but) North America actually advanced in the year. And that's extremely encouraging, because it is the foundation of the business."

The automaker reported it made 92 cents per share on $160.3 billion in revenue for the year. Ford lost $116 million in the fourth quarter of 2018 — the first quarterly loss since the fourth quarter of 2016. The fourth-quarter loss was driven largely by a remeasurement on pension plans, Shanks said Wednesday. The financial markets took a sharp decline at the end of the year, and that negatively affected global pensions.

Despite the down year, Ford will give eligible hourly full-time United Auto Workers employees $7,600 profit-sharing checks this year, up $100 from a year ago.

Ford CEO Jim Hackett said during the Detroit auto show last week that the behind-the-scenes work he and his executive team have been doing in the 19 months since he was appointed to lead the company should start to pay off in 2019 after the company took hits to the bottom line in 2018.

"2018 will be known as the year between the business that wasn't designed right and the business that we know will win," Hackett said Wednesday. "We are in execution mode. 2018 was a year of progress in terms of laying the foundation for the global redesign of our business."

The company also lost $674 million in the "mobility segment" in 2018. Ford Credit made $2.6 billion. The automaker's North American business was operating at a 7.9 percent margin in 2018. The teams are targeting 10 percent margins.

Shanks said Wednesday that the North American business unit, which is currently in the middle of a white-collar restructuring, is not a problem area for Ford.

"North America is going to be right at the center of what Ford Motor Co. is," Shanks said. "The opportunity is to find ways outside of North American where we can compete effectively, deploy capital and get an appropriate return.

"We have a lot of thoughts, ideas, plans to turn that around, and it's in play."

Ford expects financial results in 2019 should be an improvement over the year prior. The automaker is in the middle of a sweeping global restructuring as it readies for a new chapter in the automotive industry. Under Hackett, Ford's senior leadership is pushing to trim $25.5 billion in operating costs over the next five years and spend $11 billion to shake up failing businesses in Europe, China and South America, and better position the automaker's North American business for continued profitability through the next decade.

"2018 was a bit of a rebuilding year for Ford," said Jeremy Acevedo, analyst with Edmunds. "The company was plagued by aging product during a year where it seemed like every other automaker was coming out with flashy new trucks and SUVs. The future looks brighter for Ford in 2019, as the new Ranger and Explorer will likely generate needed excitement and sales. But the fact that Ford’s bread and butter F-150 is showing its age while key competitors are freshly redesigned could give the company some heartburn in the new year."

Ford will launch several new vehicles in 2019, including a redesigned Explorer and Escape, two of the company's strongest sellers. The automaker will also bring back the Lincoln Aviator, the Ford Ranger launched in January, and Ford plans to update its Super Duty pickup this year.

The automaker in early January announced multiple initiatives to right-side its business in Europe. Ford plans to cut salaried and hourly workers there, end production at plants in France and Germany, possibly cut less profitable vehicles like the C-Max, and possibly exit a joint venture in Russia. The automaker plans to focus more heavily on its already-profitable commercial vehicle business in Europe, and launch better, in-demand vehicles there.

Ford last week officially confirmed plans to partner with Germany's Volkswagen AG on commercial vans and midsize pickups for sale outside of the U.S.

Shanks said in early January that Ford would report better financial results in 2019 despite expected rising commodity costs and on-going trade disputes. The company has remained vague on its outlook, though.

"Ford has been criticized for being closed door on its restructuring plans," said David Kudla, chief investment strategist with Grand Blanc-based Mainstay Capital Management. "We do not believe Ford will have as rosy an outlook as GM for the year. They are just a few steps behind in their restructuring and cost cuts."