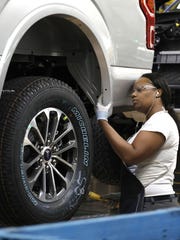 Revenue from the automaker’s truck and van business totaled $72 billion in 2017, Ford disclosed in two presentations to investors in as many weeks. That’s more than the trailing 12-month sales of U.S. companies including Intel Corp., Walt Disney Co. and PepsiCo Inc., according to data compiled by Bloomberg.

As Chief Executive Officer Jim Hackett engineers an $11 billion restructuring of Ford, its massive pickup and van business will play a foundational role. The rise of online shopping is dramatically increasing demand for vehicles best suited to deliver packages to doorsteps. In one indication ofjust how desirable the once-dreary commercial-vehicle segment has become, the world’s largest automaker, Volkswagen AG, just teamed up with Ford to develop models including Transit vans.

“Ford has always been strong in that segment,” Michelle Krebs, an analyst at Autotrader, said of commercial vehicles. “It’s not particularly sexy and no one pays much attention to it, but it makes a lot of money.”

Ford has never broken out information on how lucrative this business is, according to a spokesman. The company opened up about it first at a Deutsche Bank auto conference this month, and again in its earnings call Wednesday.

The automaker reported that its 2.4 million truck and van sales worldwide in 2017 generated earnings before interest and taxes of $10 billion. The operating-profit margin for the business was 14 percent — miles ahead of the 4.4 percent margin for Ford’s entire auto operations in 2018.

“We have the most extensive global commercial-vehicle lineup and portfolio of any company, and we are about to make it much stronger,” Jim Farley, Ford’s president of global markets, said at the Deutsche Bank conference. He called the company’s 44.5 percent share of the North American commercial truck and vans segment “completely dominant,” saying Ford outsells its four closest competitors combined.

The crown jewel of Ford’s truck business is its F-Series pickup line, which hauls in the bulk of the company’s profits. U.S. deliveries rose in 2018 to 909,330, making it the top-selling vehicle of any kind in America for the 37th consecutive year.

The F-Series outsold the nearest competitor by the biggest margin ever last year, Hackett said at the Deutsche Bank conference. He called Ford’s commercial vehicle business a “global juggernaut.”

To maintain its dominance, Ford is working to “future-proof” these models, Farley said. “We’re going to be electrifying the F-Series, both battery-electric and hybrid, and we’re doing the same for Transit.”