Despite only four cylinders, the 2019 EcoBoost is close enough to greased lightning to be a whole mess of fun 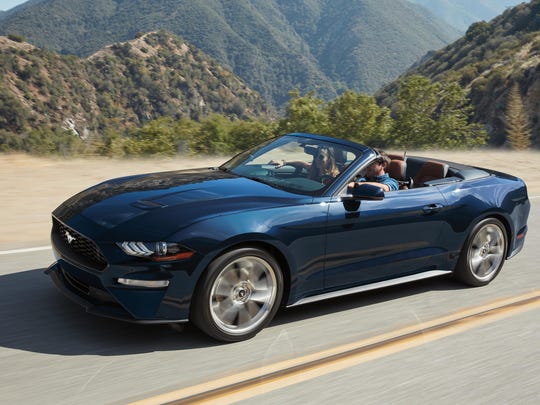 It’s easy to admire the EcoBoost’s engineering once you put the top down. (Photo: Ford Motor Co.)

I recently drove a 2019 Chevrolet Camaro, followed shortly thereafter by the 2019 Ford Mustang.

Which did I prefer? From a technical standpoint, both cars have never been better, riding atop state-of-the-art platforms and wearing styling that blends elements of their original designs with the latest styling cues. Both perform well and are modestly price for the performance they deliver.

So why do I find it so hard to like the Camaro? Perhaps it’s the model’s design evolution.

Having carefully developed from 1970 through 2002 on one design path, it could have continued when it returned for 2010 by reinterpreting the beautiful 1970 model, one influenced by Italian coachwork. Instead, the Camaro’s return self-consciously plagiarized its first generation, which was cribbed from the Ford Mustang.

While the new Camaro steps away from that, it still seems more like a buffoonish caricature than a natural evolution. The Mustang has more or less retained its classic styling cues across its lifetime, with the 2019 edition blending its iconic American design with European elan, buffed to a modern sheen.

In this light, GM seems like a follower, not a leader. The Ford Mustang has been continuously built for 55 years. In contrast, the Camaro has come and gone, afflicted by periodic bouts of corporate neglect.

Besides, Steve McQueen drove one. And as if that’s not enough, remember that the Mustang invented the class the Camaro competes in, namely the pony car class.

In contrast, the EcoBoost makes do with a double-overhead-cam 2.3-liter turbocharged four-cylinder engine with four valves per cylinder and twin independent variable camshaft timing. If the idea of a four-cylinder Mustang makes your blood run cold, or makes you feel like Steve McQueen’s unloved relative, keep in mind it develops 310 horsepower to the rear wheels, more than the Mustang’s V-8 developed 10 years ago. A six-speed manual is standard, a 10-speed automatic is optional. And it starts at less than $26,395 for the EcoBoost coupe, or $31,895 for the EcoBoost convertible.

It’s easy to admire the engineering that went into the Mustang EcoBoost convertible once you put the top down. Twist and unhook the center-mounted handle and hold a button. Then, put this prized steed in gear, stomp on the accelerator and let the spring sun’s warmth clear out the winter cobwebs.

Despite the puny number of cylinders under the hood, the EcoBoost is close enough to greased lightning to be a whole mess of fun. The steering has just enough heft without feeling too light, and turn-in remains sharp, even on the base model. The car remains flat in corners, but that’s to be expected.

And while I admit that the Camaro I drove had a more precise feel, the tradeoff in punishing ride quality was hardly worth it given the crumbling nature of American roads; I prefer all of my vertebrae to remain intact. That’s what makes the Mustang such a pleasure; it doesn’t punish you for your fun, providing the optimal amount of grip while delivering impressive bump absorption and admirable ride quality.

Wind management is excellent, providing just enough wind rustle to remind you that you’re outside. And when the top is raised, the interior is remarkably hushed while rear visibility still bests the Camaro coupe, whose crevice-like windows and huge blind spots make driving a leap of faith. Not so with the Mustang.

With its classically updated looks, sporting yet refined manners and admirable performance, the 2019 Mustang EcoBoost is a classic American stallion, the perfect way to welcome the new season. And even if driving this will never transform you into Steve McQueen, except in your wildest dreams, it could fatten your wallet. After all, Mustangs eventually become collectible — you just have to wait awhile.