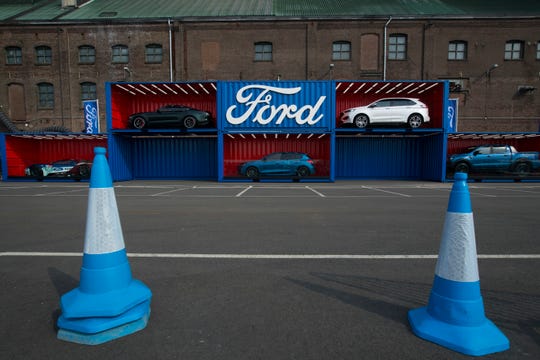 Ford Motor Co. has a plan to accelerate a turnaround in China, and could reconsider its presence in the United Kingdom.

The automaker on Wednesday outlined "Ford China 2.0," a five-pronged plan aimed at accelerating a turnaround in the world's largest auto market. The plans were announced hours after Ford of Europe Chairman Steven Armstrong told reporters Tuesday in Amsterdam that it would evaluate its footprint in the UK in the event of a no-deal Brexit.

The moves come as Ford CEO Jim Hackett rolls out a string of global decisions to realign Ford and drive profits from some of its long-struggling business units.

"China is leading the world with smart vehicles, and is a key part of Ford’s global vision for the future. We are excited about seeing more products developed in China, for China and from China," Hackett said in a statement. "Ford is deeply committed to China, and with our new China leadership team and vision, we’re investing in the future – a future that starts today."

The Brexit issue comes as Ford already is restructuring its European business unit. The automaker plans to shutter factories there and in Russia, and lay off employees. Armstrong said the automaker would have to take a hard look at its engine and transmission plant in the United Kingdom if there's a hard Brexit. A hard Brexit would happen if the United Kingdom leaves the European Union as well as the market and customs union.

The automaker has said it is closely monitoring the situation. A decision is expected within weeks.

In China, Ford is making up for lost time. The automaker plans to speed up development and introduce new vehicles there. Planned are 30 new Ford and Lincoln vehicles over the next three years. More than 10 of those will be electrified. The automaker on Tuesday debuted a new global redesign of the Ford Escape, which will launch in China later this year.

The automaker also plans to lean on partnerships with Changan Automobile and Jiangling Motors Corporation Group to develop new products and sell more directly to Chinese consumers. Ford plans to debut Sync+ in China in partnership with Chinese internet company Baidu. In 2021, the automaker plans to equip new vehicles with technology that would allow vehicles there to communicate with infrastructure or other vehicles.

The automaker has announced a similar target for other markets, but is aiming for 2022.

Ford also plans to invest more heavily in its China product-development team to cater more to Chinese consumers. Ford has had trouble breaking into the market there — its vehicles emphasized things Chinese consumers didn't prioritize, executives have said.

The automaker also plans to push the Lincoln brand in China.

Ford plans to continue to restructure the Chinese business team, the automaker said. It plans to recruit "local leaders" there who know the Chinese automotive sector.