The first set of videos and a blog post by Ford's head of electrification Ted Cannis aim to address a "perception gap" and misconception among modern drivers that electric vehicles can't do things like drive in the winter, drive fast or actually run 100% on electricity. 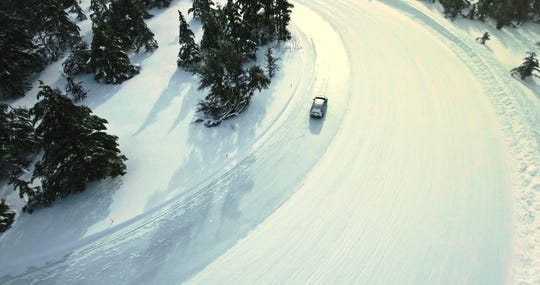 The campaign comes a few months before Ford is expected to unveil the "Mustang-inspired" battery-electric crossover vehicle it's been teasing for more than a year. The 2020 model year vehicle comes straight from the mind of CEO Jim Hackett and his executive team. It's a chance for Ford to show people it's capable of competing in the future. And Ford has to wade through years of bad tastes left in the mouths of consumers thanks to dull, under powered and expensive electric vehicles trickled out by the entire industry if it wants the as-yet-unnamed product to sell.

"We are out to de-bunk other electric vehicle misconceptions just as we did with the F-150 demonstration: by showing — not just telling — so that potential customers can feel confident should they choose an electric vehicle in the future," Cannis wrote.

The unnamed crossover (Ford has trademarked the Mach E name) kicks off a slew of new battery electric vehicles from the automaker. Planned are an electric F-150, and roughly 15 other unnamed battery-electric vehicles over the next few years.

So Cannis's blog addresses things people think electric vehicles can't do according to a global survey Ford commissioned. More than 90% of people in North America and Europe don't think an electric vehicle can accelerate quickly, Cannis wrote. Ford is building a platform "with the right system power, motors, suspension, and tuning to get something really special that people would love to have," Cannis wrote. And the automaker has video evidence.

It's a continuation of the automaker's publicity push in July to show its prototype electric F-150 pulling 1.25-million pounds in a train yard. The automaker on Thursday also put out video of its electric test vehicle whipping around a track in the snow in northern Michigan.

The automaker plans to put out a series of videos addressing "myths" about electric vehicles.

"We’re out to prove just how exciting these cars can be," Cannis wrote.