Ford is not alone. Its chief Japanese competitors are using a similar strategy to meet regulations with hybrid SUVs made in the USA.

Louisville, Ky. — Tightening federal fuel economy regulations are forcing difficult choices on automakers as they try to balance the conflicting desires of customers and government agencies.

Consider the 2020 Ford Escape made here in Kentucky. The compact SUV is perhaps the most important vehicle in the Blue Oval’s lineup outside its best-selling F-150 pickup. Aimed at the most popular, non-truck segment in the industry, the comely new Escape shoulders a heavy load for the Dearborn-based brand. 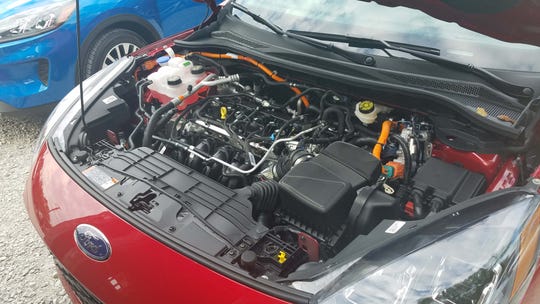 Under the hood, the 2020 Ford Escape Hybrid sports a 2.5-liter, 4-cylinder engine mated to an electric motor. (Photo: Henry Payne, The Detroit News)

It must not only compete against mega-selling Japanese competitors while trying to retain sedan customers as Ford ditches its car lines. It also must navigate a thicket of fuel economy rules by introducing an expensive, battery-powered hybrid drivetrain strategy.

“Absolutely, each year the regulations get tougher,” says Ford SUV marketing director Craig Patterson. “They become more difficult to meet starting in 2010. This is a 2020 — so the Escape has been four or five years in the making to meet the regs.” 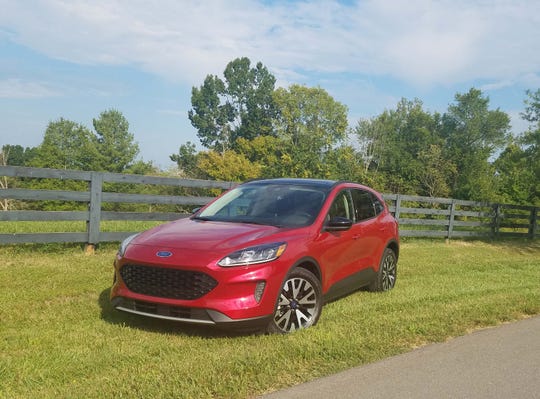 Once a niche product, this go-round Ford needs the Escape hybrid to sell in volume to satisfy EPA edicts that require its fleet average 54.5 mpg by 2025. (Photo: Henry Payne, The Detroit News)

Ford is not alone. Its chief Japanese competitors are using a similar strategy to meet regulations with hybrid SUVs made in the USA. Toyota has long been synonymous with hybrids, but with its 2019 RAV-4 it is aggressively marketing hybrids across its best-selling compact ute line. Indeed the hybrid, assembled in Kentucky, is about 15% of RAV4 sales this year and has often outsold the brand's iconic Prius hybrid.

Honda just announced that it will be churning out a hybrid version of its best-selling CR-V SUV — made in Indiana and priced to sell against the RAV4 and Escape. Honda promises two-thirds of its lineup will be electrified worldwide by 2030 to meet tightening regulations.

U.S. regulations, controversially imposed by the Obama EPA a decade ago while Detroit automakers were begging for government bailouts, demand that each class of vehicle meet rising mpg numbers depending on their physical footprint. The smaller the car, the tougher the standards.

The uncertain costs play a part in analysts’ concerns about Ford’s future, with Moody’s Investors Service downgrading Ford bonds to junk this week. The uncertainty was underlined last month in Frankfurt, Germany, too, when environmental groups led by Greenpeace called for an outright ban on SUVs in contradiction of Ford’s SUV-truck market strategy.

“This is one of the reasons that Ford’s bond rating got downgraded to junk,” says long-time Wall Street auto analyst Joe Phillippi of Auto Trends Consulting. “You take these business challenges to the ratings agencies and they will not be happy.” 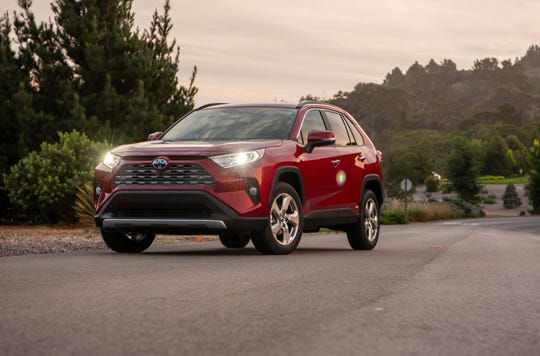 Toyota is following a similar hybrid strategy as Ford by offering its best-selling Toyota RAV4 with a competitively priced hybrid model. (Photo: Toyota)

Ford abandoned its first-generation Escape Hybrid in 2012 due to slow sales. Introduced in 2005, the hybrid was encouraged by then-CEO Bill Ford Jr., a passionate environmentalist who remains executive chairman of the Blue Oval, as well as government incentives that paid customers to buy gas-electric hybrids.

“That vehicle was a bit of a science project for us,” smiles Patterson.

But with mpg regs tightening, the hybrid is back for 2020. Once a niche product, this go-round Ford needs the hybrid to sell in volume to satisfy EPA edicts that require its fleet average 54.5 mpg by 2025.

So it has introduced a hybrid powertrain not in a highly equipped green machine with a $10,000 premium over the base model as with the 2005-12 model, but as the mainstay, $28,290 SE drivetrain in the Escape lineup with a premium just two grand over the $26,080 S base model. The ute doesn’t even get a Hybrid trim name — instead adopting Ford’s popular “Sport” badge.

“If there were no regulations, the hybrid would probably not be the solution for the Sport model,” says Patterson. “We’d be looking for other solutions that are more efficient to deliver that sporty feel. It’s the regulatory environment that pushes you to do things that consumers don’t want — or don’t want initially.”

Patterson says that, unlike previous Ford hybrids like the first Escape and recent Fusion, the 2020 Escape hybrid has been designed from the ground up to carry a battery — meaning interior space isn’t compromised by a battery pack.

With the same interior space as the gas version, a healthy, 198 horsepower, and a big bump in fuel efficiency (media here saw a healthy 35 mpg fuel economy), Patterson says the hybrid model will appeal to more than just tree-huggers.

He expects the hybrid drivetrain — which will also be available, standard, on the up-trim Titanium model — to garner a whopping one-third of customers. Sales and regulatory problem solved? Maybe.

Analyst Philippi says the Japanese makers are more established in the market as hybrid sellers — and boast the segment’s best transaction costs, a critical advantage when stuffing a car with more expensive battery tech.

“We’ll likely see a barrage of low monthly lease rates in order to sell the hybrids,” predicts Phillippi. “You’ve got to be able to get the customers out the door to hit your regulatory numbers.”

Those segments typically pull in first-time buyers — buyers who then, assuming a good ownership experience, choose a more expensive car like the Escape or mid-size Explorer SUV as they gain income/family members. Toyota and Honda have been masters of this strategy by hooking buyers with their best-selling, entry-level Corolla and Civic sedan models.

But the EPA rules were particularly difficult for Ford’s small cars to make.

“It’s what made the business difficult for us to continue” making small cars, says Patterson. “As regulations get higher and higher it gets more challenging to do compact vehicles. The compliance is (easier) for trucks.”

So Ford has plowed more money into its F-series pickups which make big profits and help mitigate tighter Escape margins caused by higher-cost-to-manufacture hybrids. EPA’s encouragement of trucks over smaller, more fuel-efficient cars, says Patterson, is one of the unintended consequences of the federal mpg laws. 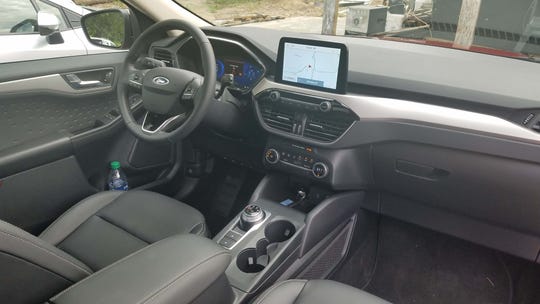 The 2020 Ford Escape Hybrid looks the same inside as any other Escape model. Ford is keen to sell the car as a mainstream model. (Photo: Henry Payne, The Detroit News)

“If you go all the way back to the SUV boom, the initial regulations did not cover SUVs,” he says. “That’s what really launched the initial body-on-frame vehicles like Explorer. Those customers were unwilling to make sacrifices necessary to drive a fuel-efficient car.”

Green groups like Greenpeace are determined to reverse that trend to fight global warming, and held a press conference at this week’s Frankfurt auto show calling for an SUV ban.

Some automakers like VW pushed back, but Ford resisted comment. Ford Jr. has been friendly with Greenpeace in the past. Indeed, company insiders say the chairman is a key reason Ford has embraced climate regulation even as the Obama EPA’s own numbers show the 54.5 mpg-by-2025 standard would reduce global temperatures by a negligible three one-thousands of a degree (0.003) Celsius of warming by 2100 (within the margin of error).

“Global climate change is real,” the company said in a statement. “We are investing more than $11 billion to put hybrid and fully electric vehicle models on the road by 2022.”

Even as Ford hopes its Escape SE Sport and Titanium trims will help sell hybrids, EPA rules further discourage Ford from offering its signature ST performance trim. An Escape ST would help bring customers in from the discontinued Focus and Fiesta STs to the similarly-sized Escape.

“I’d love to do a Escape ST and it makes a lot of sense given the SUVs we have as well as customers coming out of Focus and Fiesta. Those are customers most likely to do that,” says SUV marketing chief Patterson. “But ... if you do it with a gas engine it really harms overall corporate fuel economy.”

Ford has another trick up its sleeve, however. It will soon introduce a second SUV in the compact segment — paralleling Escape — but with a more off-road temperament. Dubbed by journalists “the baby Bronco,” it would rival the Jeep Cherokee and — like Jeep — bring higher transaction costs.

Greens may frown on another SUV, but Wall Street might warm to the greener dollar margins.