A majority of members at nearly all local unions representing Ford employees so far have voted in favor of the tentative agreement. The UAW wants vote totals by 7:30 p.m. Friday. If the contract is ratified, UAW leaders will start focusing their bargaining efforts on Fiat Chrysler Automobiles NV. 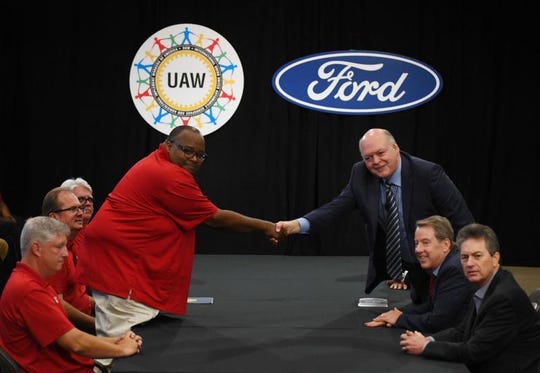 Chicago turned down the vote by 64%. At this point, in order for ratification vote to fail, ballots cast against the agreement would have to be greater than that percentage, said Kristin Dziczek, vice president of industry, labor and economics at the Center for Automotive Research in Ann Arbor.

"It's going to have to be profoundly negative for it to not pass," she said.

Ford's agreement includes more specifics than the contract with General Motors Co. on where it would invest its $6 billion commitment and how. The Chicago and Lima plants that voted down the agreement have some of the smallest investment commitments compared to their counterparts. So does Louisville Assembly in Kentucky, which is expected to wrap up voting on Friday, with just $100 million in planned upgrades.

Louisville is one of Ford's largest locals with nearly 13,000 members. Also finishing up on Friday are Dearborn's Local 600 and Romeo Engine Plant, which would close under the proposed agreement. The 600 hourly employees who work there, however, would be offered jobs at the Van Dyke Transmission Plant about 15 miles away.

Besides Romeo, the proposed deal does include a moratorium on outsourcing and plant closures through the life of the four-year contract. It also includes 3% wage increases in the second and fourth years and 4% lump-sum bonuses in the first and third years for eligible permanent employees.

"Ford has not made the plant closures and cutbacks that GM had previously announced," said Marick Masters, a management professor at Wayne State University's Mike Ilitch Business School. "It’s a cash-rich contract for the membership."

"They didn't have to suffer through a month-long strike," said Art Wheaton, an automotive industry specialist at Cornell University's Industrial and Labor Relations School. "That puts them way ahead in terms of cash."

Unlike GM, Ford also now has an 8% cap on the number of temporary employees Ford can hire company-wide and 10% at any given facility unless otherwise approved by the national parties. Currently, temps represent 6% of Ford's UAW workforce.

Ford also has better relations with the union than the other two automakers, experts said. For example, after the contract was sent to the membership, the company and the union agreed to correct an error that would have resulted in nearly 10,000 hourly workers missing out on pay raises.

"Ford did not have to increase the money," Wheaton said. "They said, 'Nobody is getting screwed over. You're our partners. We need to fix this.'"