Farley to get $2.5M stock grant if not made next Ford CEO

The declaration is Ford's most public acknowledgment to date that Farley is the top contender to replace its 64-year-old CEO, Jim Hackett

Farley to get $2.5M stock grant if not made next Ford CEO

Ford Motor Co.'s chief operating officer, Jim Farley, would receive $2.5 million in stock if he is not made the Dearborn automaker's next CEO, the company disclosed Friday in a federal filing.

The declaration is Ford's most public acknowledgment to date that Farley is the top contender to replace its 64-year-old CEO, Jim Hackett. It comes less than two weeks after Farley, 57, took over the No. 2 role March 1 at Ford. 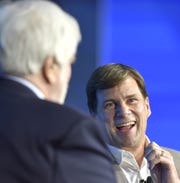 "In the event an individual other than Mr. Farley is elected as successor to James P. Hackett as President and Chief Executive Officer of Ford, a stock grant with a value of $2.5 million in unrestricted shares of Ford common stock will be made," reads the filing with the Securities and Exchange Commission. "If Mr. Farley is offered the position of President and Chief Executive Officer and he declines such offer, the stock grant will not be made."

The grant "provides an incentive to him to continue his long-term commitment to Ford and to the company in becoming a leader to this emerging area for smart vehicles for a smart world," spokesman T.R. Reid said. "It's important to reward short-term performance and encourage long-term commitment and accomplishment, as well."

Hinrichs' responsibilities in leading the global auto business are now Farley's, in addition to his roles in overseeing the development of autonomous, connected and electric vehicles. He has been charged with bringing the traditional and new components of the industry together as one business.

The compensation committee of the company's board of directors approved the stock grant on Wednesday. Ford previously disclosed that with Farley's promotion, his annual compensation package could increase 32% to a potential $8.29 million from $6.295 million.

That includes a $1.4 million base salary, a performance-based incentive bonus of $1.89 million and an annual stock grant of $5 million.