General Motors Co. told employees Thursday it will extend the shutdown of its production facilities but did not say when the plants could reopen.

"Previously, we announced the suspension of regular plant operations across North America through March 30. Today, we are extending that suspension and will continue to evaluate our operating plans going forward," said a communication sent to manufacturing employees from Phil Kienle, vice president of General Motors North America Manufacturing and Labor Relations.

However, in a separate message sent to Arlington Assembly employees in Texas, GM said it would reach out to full-time seniority employees to see if they would volunteer to work paid shifts starting March 30. Arlington is the full-size SUV plant that is getting ready to produced next-generation vehicles.

GM said in a statement sent to The Detroit News it "is soliciting volunteers from its workforce to finish the build out of its current model truck for its customers and to maintain critical business priorities."

"This work is expected to last one week or less after which all volunteers would return to layoff status," GM said. "This temporary restart of work to finish the build out of current models is only at Arlington Assembly, other GM locations are not affected.”

Earlier Thursday, Ford Motor Co. and Fiat Chrysler Automobiles said they could reopen their U.S. facilities as early as April 14, but the United Auto Workers union reacted to the planned reopenings with "great concern and caution."

The automakers began shutting down manufacturing facilities March 18 amid pressure from the rank-and-file and labor unions amid the coronavirus pandemic. At the time, they indicated production could restart in the final days of March. But states have implemented state-at-home orders that have decreased demand for new vehicles. 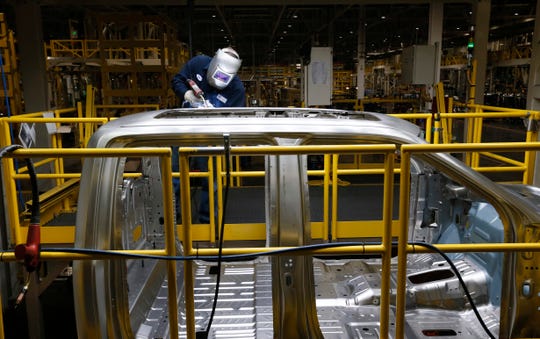 Ford plans to resume production at its Dearborn Truck plant and several others on April 14. (Photo: Paul Sancya, AP)

Fiat Chrysler plants in the United States and Canada, as well as its Auburn Hills headquarters operations and construction projects, will remain closed until April 14 "dependent upon the various state stay in place orders and the readiness of each facility to return to production," the Italian American automaker said in a statement. It will announce the status of its Mexican operations in a separate announcement.

Ford Motor Co. will restart one shift April 6 at Hermosillo Assembly in Mexico that produces the Lincoln MKZ sedan. More plant restart dates are set for April 14. They include:

"We will continue to assess public health conditions," Kumar Galhotra, Ford’s president of North America, said in a statement, "as well as supplier readiness and will adjust plans if necessary."

UAW President Rory Gamble said restart dates should be informed by data and that strict guidelines should be in place to protect workers and their families.

"The UAW continues to review with great caution and concern decisions being made about restarting workplaces, especially at advanced dates," Gamble said in a statement. "The only guideline in a boardroom should be management asking themselves, 'Would I send my family — my own son or daughter — into that plant and be 100% certain they are safe?'"

The shutdowns are in line with other automakers. Although Toyota Corp. has extended its North American downtime until April 17 with production resuming April 20, Volkswagen AG intends to restart production at its Tennessee plant at 10 p.m. April 5. Honda Motor Co. Ltd.'s 12 manufacturing facilities, Nissan Motor Co. Ltd.'s Mississippi and Tennessee plants and Subaru Corp.'s Indiana plant are closed through April 6. Hyundai Motor Co. has suspended production in Alabama until Tuesday.

Meanwhile, facing declines and costs associated with the production suspension, Ford said 300 top executives will defer portions of their salaries. Executive Chairman Bill Ford will defer all of his base salary for at least five months starting May 1, though he will continue to receive full retirement benefits contributions for the period.

CEO Jim Hackett for the same period will defer 50% of his base salary. Others will do so for 20% to 50% of their salaries.

The actions come as the Dearborn automaker seeks to preserve its financial flexibility amid declining demand because of the coronavirus. The Blue Oval already has borrowed $15.4 billion to help with losses after last week's starting a vehicle manufacturing hiatus in Europe, North America and elsewhere. It also suspended its 15-cent quarterly dividend.

cash position in this unprecedented situation," Hackett wrote in a letter to Ford employees. "Candidly, though, we need to do much more given the sharp drop-off in

demand for new vehicles and the shutdown of our plants worldwide."

Hackett noted the Blue Oval's efforts do not include layoffs for now. If the effects of the virus are longer or more severe than anticipated, however, the company could take "tougher actions," he said. He did not specify what expectations are. He added that the company many offer voluntary sabbaticals.

The company also is deferring merit-based salary increases, suspending overtime for salaried workers and freezing hiring of non-critical skill roles. And Ford could reduce work schedules and compensation for jobs that cannot be done effectively away from Ford facilities.

"The actions we’re taking now are wide-ranging and substantial," Hackett wrote. "We hope they will be enough to give Ford the financial flexibility to ride out the economic and business effects of the coronavirus – so we can emerge as a stronger company."

Fiat Chrysler also said it is borrowing a one-time $3.8 billion for a one-year term that can be extended for an additional six months. This is in addition to existing credit facilities of $8.4 billion. It already has started to draw down from a bilateral credit line worth $1.7 billion.

"This transaction," the company said in a statement, "confirms the continued strong support of FCA’s international key relationship banks’ in the current extraordinary circumstances."

GM is borrowing $16 billion to support itself through the downtime.