Dearborn — Ford Motor Co. is signaling just how costly the coronavirus pandemic is shaping up to be for global automakers, confirming it expects pretax losses to balloon at least another $5 billion in the second quarter.

The startling estimate framed the automaker's first-quarter financial results, released Tuesday, in which the Blue Oval confirmed a first-quarter net loss of $2 billion. Ford reported an adjusted pretax earnings loss of $632 million for the first three months of the year on revenue of $34 billion as it battled unprecedented headwinds from a sharp economic slowdown attributed to the COVID-19 outbreak.

The results reflect the crippling effects of the pandemic on automakers’ bottom lines, even though the ongoing North American production shutdown went into effect less than two weeks before the end of the quarter.

Results from the current quarter are sure to be even worse, Ford said, with no cars, trucks or SUVs rolling off North American assembly lines in April and Detroit automakers tentatively eyeing a mid-May restart date — roughly midway through the second quarter. 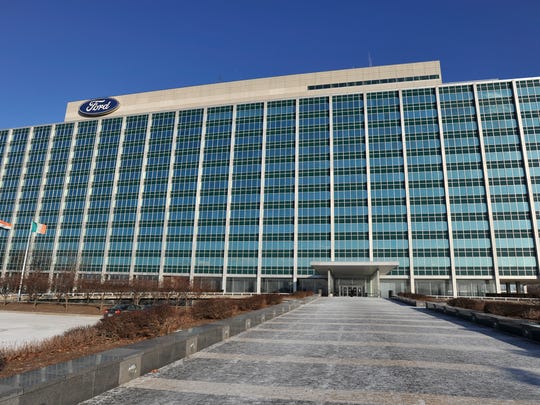 In a release, the company attributed the "significantly reduced" results to the pandemic, as it noted that "protecting people and helping society respond to the crisis became primary measures of current success alongside balance-sheet management and operational excellence."

"Ford people are keeping each other safe, limiting the spread of the virus, safeguarding health care workers and first responders, and taking care of customers," CEO Jim Hackett said in a statement. "The imagination, initiative and execution of our team is helping save lives today, and those qualities will allow Ford to emerge from this as a stronger company.”

In March, the automaker quickly shifted gears from assembling cars, trucks and SUVs to producing badly needed medical supplies. The company, along with the United Auto Workers and Ford's medical and manufacturing partners, has committed to producing hundreds of ambulances, millions of face shields, 50,000 ventilators and up to 100,000 respirators, among other products.

Ford shares closed up more than 4% Tuesday at the close of trading, ending the session at $5.38 per share. But year-to-date, shares in the Blue Oval are down more than 40% from $9.42 per share at the beginning of the year.

In the automaker's other global markets, the results were more dire. Profits of $346 million in North America were offset by losses in South America, Europe and China, where the businesses delivered negative margins 15.5%, 2.3% and 40.7%, respectively.

And, in another reflection of the pandemic's economic consequences, the automaker's sales dropped 12.5% in Q1. The decline was the largest of any of the Detroit Three, and was Ford's biggest quarterly decline in 11 years, according to Edmunds.com, an automotive information website.

"2020 was supposed to be different: this should've been a promising year for the company, with exciting big-name launches such as the new Bronco and F-150. But the world has radically changed and model launches seem insignificant when compared to fighting a global pandemic."

One bright spot, she said, is that there have been "encouraging" signs about pickup truck sales, "and Ford has that in spades. Earnings will be far from ideal for the first half of the year but a strong truck business is somewhat softening the blow of a collapsed auto market."

Ford's truck sales were only down 5.4% in the first quarter from a year earlier, compared to 36% and 11% drops in car and SUV sales, respectively. And, Caldwell noted, Ford has strong trade-in loyalty, "mostly thanks to its devoted base of pickup truck owners." 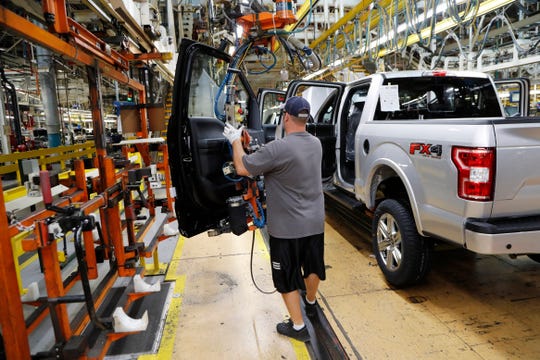 On the heels of a disappointing 2019, Ford had released guidance saying it expected to post between $5.6 billion and $6.6 billion in earnings before interest and taxes in 2020. But because of the virus-induced shutdown, the automaker earlier this year withdrew all guidance for 2020. It also stopped paying dividends to shareholders.

But in Tuesday's release, Chief Financial Officer Tim Stone said while conditions remained "too ambiguous" to provide full-year guidance, he expects second-quarter adjusted pretax earnings to be a loss of more than $5 billion: "We believe we will see the largest impact of this crisis in the second quarter."

Were it not for the virus and the economic slowdown it has delivered, he added, Ford would have been on track to post adjusted pretax earnings of at least $1.4 billion.

In March, Ford drew down more than $15 billion from two existing credit lines. Cash will be critical for automakers to weather the production shutdown and will be something analysts watch closely. On Tuesday, Stone said the automaker has enough cash to make it through the end of the year. As of Friday, Ford had $35 billion in cash and liquidity. 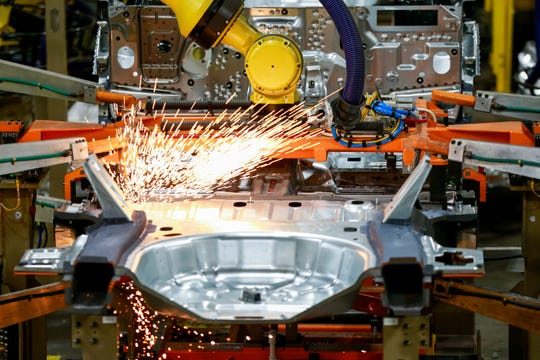 FILE - In this June 24, 2019, file photo machines work on a Ford vehicle assembly line at Ford's Chicago Assembly Plant in Chicago. Ford, General Motors and FCA factories have been idled for over a month due to fears of spreading the coronavirus. (AP Photo/Amr Alfiky, File) (Photo: Amr Alfiky, AP)

“Cash is king for industrial companies during a crisis, and we expect that the company’s cash burn will be the new point of focus for (Tuesday’s) release,” said David Kudla, CEO and chief investment strategist of Grand Blanc-based Mainstay Capital Management LLC, in a statement ahead of the earnings report.

In a note prior to the earnings release, J.P. Morgan estimated that Ford had a cash burn rate of approximately $4.5 billion in the first quarter: “We anticipate the bulk of the cash use to have been driven by working capital outflows as Ford began shutting down its domestic and European plants toward the back half of March. We will be looking for an update on the company’s cash position in addition to the company’s current deficit.”

"We are looking at any and all expenditures that we make across our business to determine if we need to reduce them or defer them while still investing and making the right long-term choices for customers," Stone said.

"We have identified billions of dollars of opportunity thus far, and we are going to keep addressing opportunities to improve fitness and redesign the business so we come out of this more well-positioned than ever.”

Ford logo on an Explorer at the Royal Oak Ford dealership in Royal Oak, Michigan on April 28, 2020.  (Photo: Daniel Mears, The Detroit News)

Ford Executive Chairman Bill Ford Jr., asked in a recent "60 Minutes" interview about whether the automaker would need a government loan similar to what it received during the Great Recession, said he did not expect to ask for one.

"We think we can get through this ... but we’re in an unprecedented time, so I suppose you never say never. But that’s not our plan,” he said.

Meanwhile, the company is in the midst of an $11 billion global restructuring, an effort initiated by Hackett, who became CEO in 2017 and was tasked with implementing change at the 117-year-old company. Stone said Tuesday that restructuring remains "on track."

The automaker got off to a strong start in 2019, but results for the year took a hit due to Ford’s botched launch of its new Explorer SUV.  For 2019, the automaker reported net income of just $47 million, a 99% decline from 2018, The Detroit News previously reported.

None of the Detroit Three has publicly committed to a restart date. FCA had planned to restart Monday, but said this week it was "re-evaluating" after Gov. Gretchen Whitmer extended the state's stay-at-home order through May 15.

Discussions between Ford, GM, FCA and the state of Michigan are coalescing around May 18 as a possible resumption date, said one person familiar with the situation that was first reported by The Wall Street Journal.

But that depends on complex coordination by automakers with suppliers, conflicting stay-at-home policies in various states and the political and public health agendas of at least three national governments: Mexico, Canada and the United States.

Ford said Tuesday it plans to restart, in phases, auto production at most of its European facilities May 4. And executives said the North American restart would model protocols to be used in Europe that already have been used in China.

In China, for example, the company developed air freight capacity to deliver parts and personal protective equipment, and used a logistics portal to manage its supply chain, said Chief Operating Officer Jim Farley: "The actions we took in China became best practice for us. What we learned in China is, you've got to make sure your suppliers are ready."

Additionally, Farley said the company is moving forward with several long-planned product launches, including the revival of the eagerly anticipated Bronco SUV. The company did not have any launch dates to announce Tuesday.