Ford is tapping four-legged robots at its Van Dyke Transmission Plant to laser scan the plant. The Detroit News

Ford Motor Co. digital engineer Paula Wiebelhaus takes Fluffy outside for walks in the yard. Her cats hide from him. He has his own spot in a corner of the bedroom where after a run, he plugs into his charger to reenergize.

Fluffy is no typical dog. The bright-yellow creature is a nimble four-legged robot adopted by the Dearborn automaker to crawl around its facilities to take 3D laser images that engineers use to redesign and retool its plants. Using the robotic dog is less clunky than the traditional way, could save time and money, and may help bring new products to market sooner, said Mark Goderis, digital engineering manager at Ford’s Advanced Manufacturing Center. 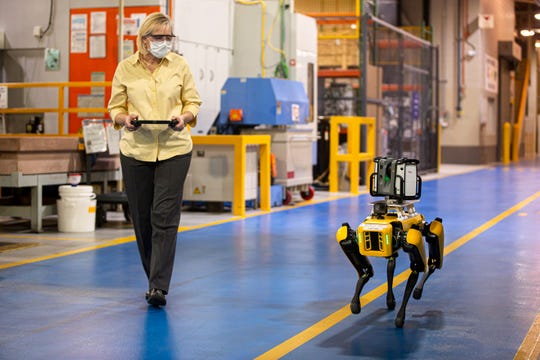 Paula Wiebelhaus navigates Fluffy the robot dog through the Van Dyke Transmission Plant. Ford is leasing two of the robots to map out its factories. (Photo: Ford)

But for Wiebelhaus, Fluffy's trainer who is keeping him at home to maintain her skills controlling the 70-pound quadruped robot during the COVID-19 pandemic, he has become a part of the family.

"I guess I was kind of surprised that I feel as close to it as I do," she said. "I won’t be the handler forever. Other people will be trained to handle the dog. I think that's going to be tough for me. It’s like your favorite car or someone borrowing your favorite dress."

Fluffy is one of two robotic dogs Ford is leasing from Boston Dynamics, a Massachusetts design and engineering firm. The machines, sold under the name Spot, provide a way for businesses to explore environments that can be dangerous or challenging to reach. More than 150 have been used to document construction progress, travel factory floors, monitor decommissioned nuclear sites — even dance in theme parks. The company is seeing strong demand from the auto industry, said Michael Perry, Boston Dynamics' vice president of business development.

"Spot is designed to augment human labor and to conduct important but dull, dirty and dangerous tasks," he said. "Using Spot in such instances reduces human safety risks and improves efficiency of mundane tasks, so that humans can focus on more specialized work." 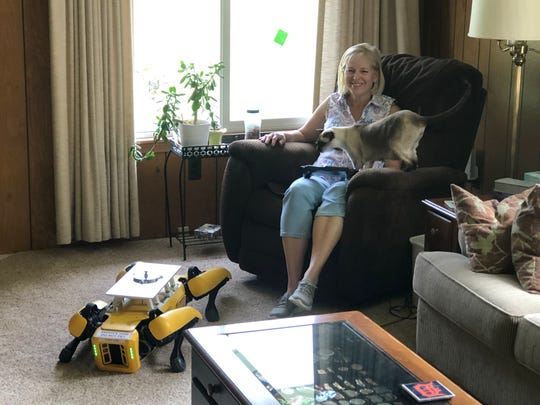 Paula Wiebelhaus is training Fluffy the robotic dog at home for Ford during the pandemic. Her cats are wary of the machine. (Photo: Courtesy Paula Wiebelhaus)

Next month, Ford will deploy Fluffy into its Van Dyke Transmission plant in Sterling Heights to create a virtual map of the facility with 360-degree laser cameras on its back.

Creating the renderings is something Ford typically does every two to three years. Equipment in plants often is adjusted or moved during that time, and the virtual images of help hundreds of engineers to get an updated picture remotely. The computer-aided design program also allows them to move around pieces as they decide how to reconfigure for building updates or new products.

"It creates a street view of our facilities for people who don’t know what that looks like," Goderis said. "It scans the facility and keeps it up-to-date."

In the past, obtaining those renderings has been cumbersome. An individual must lug around a tripod, waiting five minutes to get scans taken before moving to the next spot. It especially could be difficult getting into tight places. 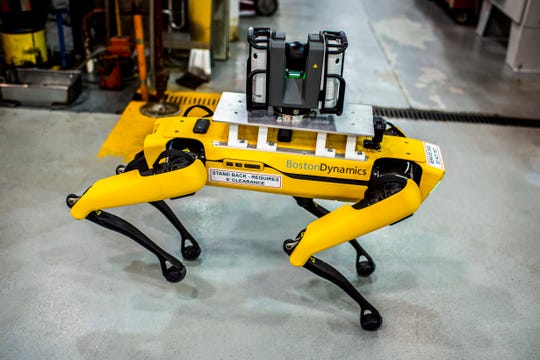 Boston Dynamics builds the dog-like industrial robot, which it brands as Spot. The machines can even climb stairs. (Photo: Ford)

Not so for Fluffy. Its compact size — bigger than a Cocker Spaniel, smaller than a German shepherd — and its ability to stretch and crouch make it an ideal solution for scanning those challenging spaces. It can travel rough terrain, even climb stairs. It can walk up to 3 miles per hour with a battery that lasts for two hours.

It also can sit on its robotic haunches and hitch a ride on Scouter — a small, round autonomous mobile robot programmed by Ford's research and engineering team — as it maneuvers up and down aisles. This conserves Fluffy's energy for the tighter spaces, as Scouter scans the bigger picture. They communicate via Wi-Fi.

Using the robots costs a fraction of the $300,000 Ford in the past has spent on mapping its facilities. And while the tripod method can take two weeks, Fluffy and Scouter can perform the task in 48 hours.

The intent is to operate the robots remotely, programming them for plant missions and receiving reports immediately from anywhere in the country, Goderis said. 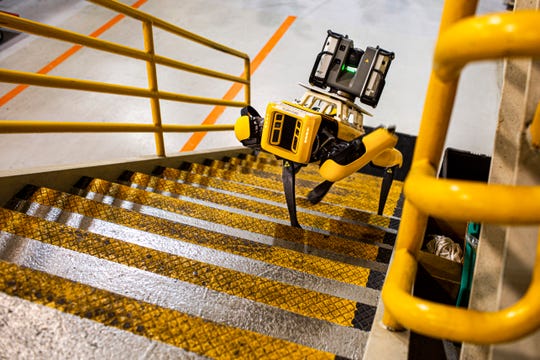 Fluffy looks at Scouter, an Autonomous Mobile Robot that can autonomously navigate facilities while scanning and capturing 3-D point clouds to generate a CAD of the facility. (Photo: Courtesy Ford Motor Company)

For now though, Wiebelhaus can manage Fluffy up to 50 feet away with a tablet. It allows her to program Fluffy's mission and monitor its cameras.

To avoid spooking the cats, Cleopatra and Casino Royale, and clattering around on her Macomb Township home's wood floors, Wiebelhaus takes Fluffy outside onto her property. Trees and a hill make for a nice obstacle course. She even attached a GoPro camera to check on a beehive on the property.

"My younger daughter thinks it’s the creepiest thing," Wiebelhaus said. "And I had a grandchild that was amazed by it. ... It's a show-stopper, that's for sure."

To avoid becoming a distraction and photographing people in plants, the robots will perform their duties between shifts. 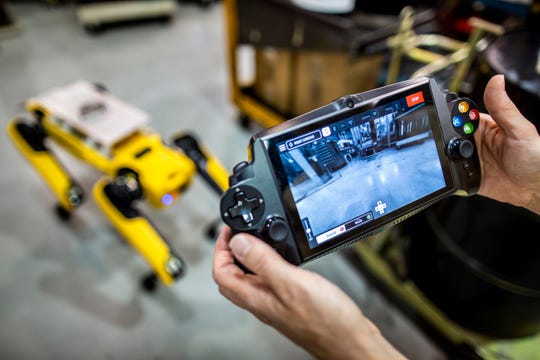 Wiebelhaus traveled to Boston in February for training on how to use the contraption. As someone who never even has held a video game controller or owned a dog, it was a bit overwhelming the first time, she admits. They assured her there was nothing she could do that would hurt Spot.

Wiebelhaus originally offered to be a backup handler. She ended up leading the project.

She sees herself as an ambassador for the cutting-edge and innovative work that she sees Ford doing.

"Fluffy isn't a toy. Fluffy is a tool. He’s cool, he’s high-tech, but at the end of the day, if he performs well, we'll be ready to deploy him."