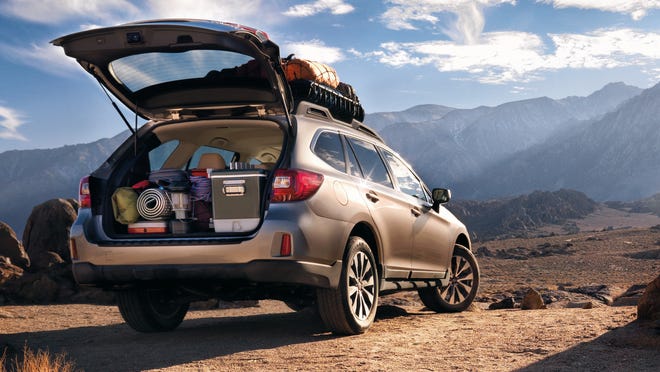 The Subaru Outback, one of the best vehicles at gracefully blending car and sport utility characteristics, is revamped for 2015 with more interior room than ever, improved ride, handsome looks and more features.

Best of all, the increased passenger and cargo room in the 2015 Outback doesn't come from a noticeably larger vehicle. The compact, five-seat, 2015 Outback occupies pretty much the same footprint as its predecessor and is easy to maneuver.

The 2015 Outback earned top, five out of five stars for occupant protection in federal government frontal and side crash testing.

For 2015, a rearview camera is standard. So are new front-seat cushion air bags designed to keep driver and front passenger properly in place during a frontal crash.

Base pricing is increased, however, from 2014 models as Subaru no longer offers a manual transmission. All 2015 Outbacks come with a continuously variable transmission (CVT) that is designed to improve gasoline mileage. All Outbacks also come standard with traction-enhancing all-wheel drive.

Starting manufacturer's suggested retail price, including destination charge, is $25,745 for a base, 2015 Outback 2.5i with 175-horsepower, four-cylinder engine and CVT. The lowest starting retail price for a 2015 Outback with uplevel, 256-horsepower six cylinder is $33,845.

Many crossover sport utility vehicles have lower base prices.

Another major competitor — the top seller in the compact SUV segment — is the Honda CR-V, which has a starting retail price of $25,575 for a base, all-wheel drive, 2015 model with 185-horsepower four cylinder and CVT.

Neither the Sportage nor CR-V offer six-cylinder engines.

Some 20 years ago, the Outback helped lead the way to crossover SUVs that blend car-like ride with SUV looks and capabilities. At the time, the Outback had more of a station wagon look. But its all-wheel drive, durability and body cladding differentiated it from other vehicles and drew buyers.

Today, contrasting plastic, lower-body cladding is passé and the Outback's styling is sleek — for a vehicle with SUV capabilities. Buyers are finding the new Outback appealing, judging by record U.S. sales of 138,790 in calendar 2014.

The test Outback, a top-of-the-line 3.6R Limited model, looked both rugged and refined in its subtle Wilderness Green Metallic paint.

Despite its generous 8.7 inches of ground clearance — for traversing logs and rocks on off road trails — the Outback seats were nicely positioned so even petite riders simply turned and set themselves on the seat cushions as they entered. There was no need to clamber upward, and door entries were accommodating.

Views out of the Outback are pleasing for front- and back-seat passengers.

The Outback has long been one of the best vehicles for front-seat legroom, and for 2015, 42.9 inches of front legroom continue to surpass that of the CR-V, Sportage and many others. Back-seat legroom is improved by an inch to 38.1 inches. Back-seat elbow and shoulder room are improved, too.

There's more cargo space than in the predecessor — a full 35.5 cubic feet behind the rear seats vs. 34.3 cubic feet a year ago. With rear seats folded flat, total cargo room is up to 73.3 cubic feet.

Yet, in exterior dimensions, the 2015 Outback has changed minutely from its predecessor. It's longer by just 0.6 inches, wider by 0.7 inches, and the wheelbase has expanded by only 0.2 inches. Thus, the new Outback can fit into compact parking spaces without fuss. It is, however, 10 inches longer than a 2015 CR-V.

The test Outback had a newly refined, more compliant ride. Most road bumps were well managed and kept away from passengers, thanks to the revised and retuned front MacPherson strut suspension and rear double wishbone suspension.

The interior was quieter, too, than in past Outbacks, and the tester wore uplevel, 18-inch tires.

Subaru's electric power-assisted steering had quick, pleasing response, and there was less body lean in the Outback than in some taller, more traditional looking crossover SUVs.

The base Outback four cylinder is unchanged for 2015. But with the improved CVT, government fuel economy ratings are better, at 25 miles per gallon in city driving and 33 mpg on highways.

The tester, with 3.6-liter, double overhead cam, horizontally opposed six cylinder that delivers up to 247 pound-feet of torque at 4,400 rpm, accelerated energetically. It also was a pleasant leisurely driver.

Fuel economy with the six cylinder averaged 21.9 mpg in a majority city driving. This is on par with the federal government's rating of 20/27 mpg for an average of 22 mpg. The Outback has a sizable, 18.5-gallon fuel tank, so a fill-up of regular at today's average price cost $41.

Some final items: The leather on the seats was surprisingly soft to the touch, but odd flaps at the lower, inner sides of the front seats were not leather and felt coarse.

The uplevel, 7-inch display screen in the middle of the dashboard was not recessed and did not have a prominent brow to shade sunshine. As a result, sunlight at some angles can hit the shiny screen and reflect into drivers' eyes.

In September last year, 56 Outbacks from the 2015 model year were the subject of a safety recall.

The National Highway Traffic Safety Administration reports bolts for an installed accessory trailer hitch may have been over-tightened. This could potentially lead to a crash because the mounting studs could fail and the trailer could separate from the Outback.