Who needs a hybrid when there's a diesel Jetta?

The 2015 Jetta TDI can rival the 50-miles-per-gallon fuel economy rating of the gasoline-electric 2015 Toyota Prius.

Who needs a hybrid when there's a diesel Jetta? 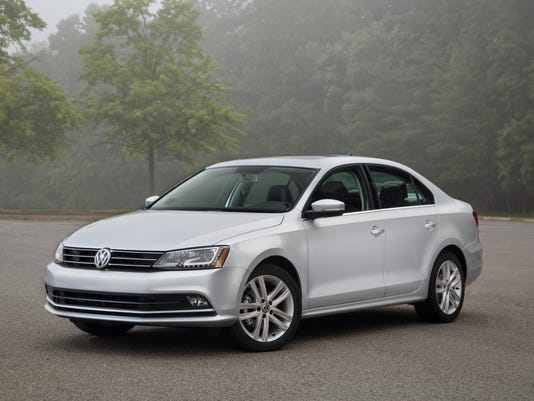 The test 2015 Jetta TDI averaged 49.6 mpg in a mix of aggressive and leisurely driving and provided a range of nearly 720 miles on a single tank of diesel.

For 2015, VW for the first time offers optional forward collision warning, side blind spot monitor and rear traffic alert on the Jetta. But a rearview camera is not standard on the base Jetta.

Pricing for the Jetta has moderated in recent years and now is closer to that of major compact sedan competitors. Still, most competitors don't offer the variety of engines — gasoline and diesel — and choice of manual or automatic transmissions that VW does.

The Jetta's base, 2-liter, gasoline engine is naturally aspirated and delivers 115 horsepower. Starting manufacturer's suggested retail price, including destination charge, for a 2015 Jetta with this base engine is $18,145 with five-speed manual and $19,245 with automatic transmission.

Competitors include 2015 Toyota Corolla sedan, which has a starting MSRP, including destination charge, of $17,775 with base, 132-horsepower, naturally aspirated, gasoline four cylinder and six-speed manual transmission. The base, 2015 Corolla with automatic has a starting retail price of $18,375. The Corolla does not come with turbo or diesel engine.

Sales of the Jetta totaled 160,873 in calendar 2014 to top all of VW's cars and SUVs. Unfortunately, though, the Jetta sales were down 1.8 percent from calendar 2013 as VW struggled to grow sales of virtually all its models.

Buyers looking for a posh or trendy looking small sedan won't be lured into a Jetta.

This four door is still conservatively styled outside, and the front, in particular, makes the new Jetta look like a small VW Passat sedan. The five-seat Jetta interior has a functional look, with no gimmicks or flamboyant design flourishes.

Passengers said the front-wheel drive Jetta seemed "solid" and "heavy" and made them feel secure.

Still, the tester got exemplary mileage even while the diesel produced strong, pleasing "oomph" with nary a moment's hesitation over a wide rpm range.

Passengers and driver could hear some diesel engine racket from under the hood as soon as the car started, and road noise came through from rough pavement.

But the pleasing power, smooth shifts from the dual-clutch automatic and the easy way a driver could modulate speed via accelerator pressure or clutchless shifts gave the Jetta a special character.

Inside, the Jetta's front seats were firmly supportive, and back-seat legroom of 38.1 inches rivals that in an Outback and bests the Corolla's 36 inches.

The Jetta's gauges, settings and information windows within the speedometer were easy to read, easy to scroll through and easy to tailor via a control on the steering wheel.

The navigation display screen in the dashboard was small. But the round knob to dial in closer looks at upcoming intersections, for example, was far easier to manage than a touchscreen.

And the Fender audio system was awesome.

The 2015 Jetta has been the subject of three safety recalls.

Last month, some 2014 and 2015 Jettas were included in a recall of 44,658 VWs. The National Highway Traffic Safety Administration said a sealing cap at the fuel rail might fail and cause fuel to spill in the engine compartment, raising the specter of a fire.

Last December, VW recalled 25,007 Jettas from the 2015 model year because software could turn off low-beam headlights when the driver switched to high beams.

Last October, some 2015 Jettas were included with 2015 Passats in a 393-car safety recall. NHTSA reported manual seatback adjustments in the cars could have been improperly assembled, causing the seatbacks to shift forward and back with little effort. This could startle a driver and lead to a crash.