Several debuts at the Los Angeles Auto Show are planned for Wednesday, including the redesigned 2017 Buick LaCrosse

The 2016 Infiniti QX30 compact luxury crossover goes on sale in selected markets in mid-2016. Pricing has not been announced.(Photo: Infiniti)

Infiniti and Honda took the wraps off two vehicles Tuesday in advance of the Los Angeles Auto Show.

Infiniti showed a new model, the 2016 QX30 compact luxury crossover. And Honda showed its all-new 2016 Civic Coupe. Both are aimed at young buyers.

The QX30 copies closely the concept that debuted at the Geneva Motor Show in March, and has much in common with the recently introduced Q30 hatchback.

An intelligent all-wheel drive system can send up to half of the engine’s power to the rear axle in slippery conditions to maintain traction. It comes with a seven-speed dual-clutch automatic transmission.

The QX30 goes on sale in selected markets in mid-2016; pricing has not been announced.

The new Civic Coupe has sexier lines than its predecessor. It comes with Apple CarPlay and Android Auto, an iPad-like console display and compact class-leading fuel efficiency. 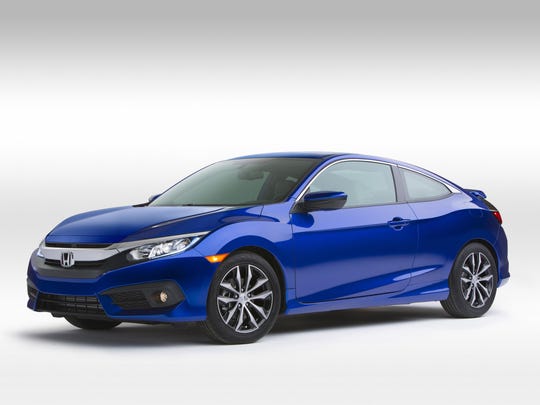 The Honda goes on sale this winter; pricing hasn’t been announced.