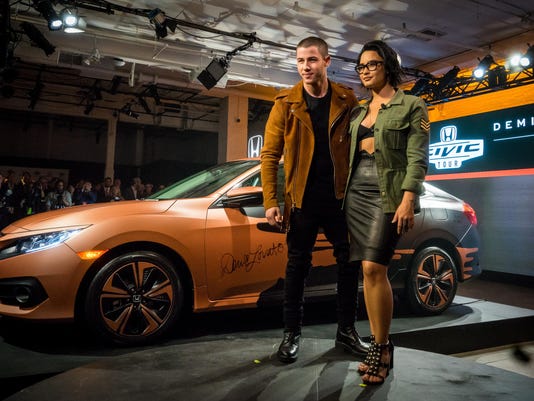 The unveilings included a 2017 Civic hatchback prototype that will arrive in U.S. showrooms later this year; a Civic Red Bull Global Rallycross race car that will begin racing in the 2016 series; and a one-of-a-kind Civic designed by singer Demi Lovato.

“With the all-new 2016 Civic, we wanted to reach the young and the young-at-heart, racing fan, Civic fans and thrill-seekers of all types,” said Nick Lee, Honda brand national advertising manager. “Civic has long been an all-time favorite of young buyers.”

The Lovato-designed Civic features a rose-gold front half that bleeds into the black-painted rear of the car.

“Designing the Civic was so much fun for me because they said do whatever you want,” Lovato said during the unveiling. “I wanted it to look like it was peeling away the black with rose gold.”

It was designed by Lovato in recognition of the pop star headlining the 15th annual Honda Civic music tour this summer with Nick Jonas, who designed a customized Honda Grom motorcycle that was shown on screen during the debut.

Fans of both singers can enter to win the vehicles or a trip to the tour finale at The Forum in Los Angeles. Details are at HondaCivicTour.com.

The Civic Hatchback will launch later this year as the third new Civic variant, joining the 2016 Civic Sedan and Civic Coupe. The 10th-generation Civic lineup will be rounded out in 2017 with the arrival of Civic Si variants and the radical new Civic Type R.

The five-door hatchback will be powered by a 1.5-liter direct-injected turbo engine that can be mated to either a six-speed automatic or manual transmission.

“This new Civic hatch continues the steady progression of the new Civic models that are advancing the stylish, and fun-to-drive performance of Civic,” said Jeff Conrad, senior vice president and general manager of the Honda Division of American Honda Motor Co.

The introduction of the Rallycross car, Lee said, is to make sure that Civic continues to reach new youthful buyers. The car was developed from a production-model 2016 Civic Coupe by renowned builders and racers Olsbergs MSE (OMSE) with technical assistance from Honda Performance Development. It will boast more than 600 horsepower, turn in a 0-60 mph time of 1.9 seconds and is designed to handle the 70 foot table-top jumps on each racetrack.