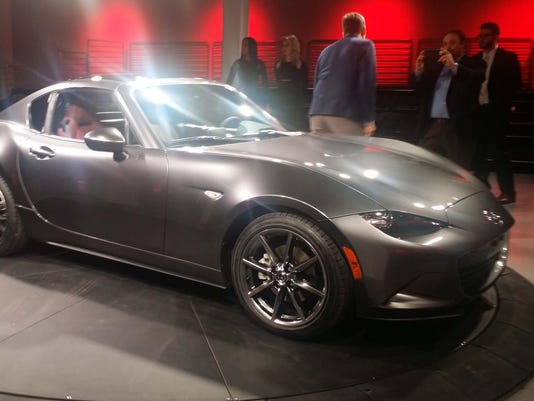 New York – Is it a Porsche Targa? A Ferrari 308? No, it’s a new Mazda MX-5 Miata hardtop convertible.

The new MX-5 Miata RF features sloping “flying buttress” B-pillars that taper to the rear deck and remain standing when the roof folds behind the front seats. Mazda
Fullscreen

The MX-5 RF features fastback styling with a smooth roofline that slopes down to the rear end, and its unique rear roof and retractable back window offer a new open-air feeling. Mazda
Fullscreen

The power roof can be opened or closed at speeds of up to 10 km/h with the press of a button, and the roof is stowed compactly and efficiently in a limited space. Mazda
Fullscreen

Despite its fastback styling and hardtop roof, the MX-5 RF offers the same amount of trunk space as the soft-top model. Mazda
Fullscreen

The Mazda MX-5 RF will be available in Machine Gray, a new premium color designed to accentuate the beauty of the vehicle bodies. Mazda
Fullscreen

The MX-5 RF will on display at the New York International Auto Show which opens to the public from March 25 through April 3, 2016. Mazda
Fullscreen

The first and second generations had both offered a detachable hardtop, but with its motor-driven retractable roof, the third-generation model made the joy of open-top driving accessible to a wider range of people and was a hit with customers around the world. Mazda
Fullscreen

Tongues were wagging at the MX-5’s New York Auto Show unveil over how radically different Mazda has gone with its retractable hardtop. So different that Mazda now calls its hardtop Miata a “Retractable Fastback.” So different that it drew comparisons to some much-pricier European sports cars.

That’s intentional, says Mazda’s North American Design Director Julien Montousse. “We want the brand to become more emotional,” he says. “Every car lover will fall in love with that roofline.”

Officially called the MX-5 RF (for retractable fastback), the wee Mazda sports a more sophisticated look in the small convertible-sports segment it has defined for over a quarter century. If “Targa” were not a Porsche trademark, the new Miata would surely get the name. Unlike the previous generation hardtop — or the base, $25,735 soft-top Miata — the RF features sloping “flying buttress” B-pillars that taper to the rear deck and remain standing when the roof folds behind the front seats.

Though the hardtop folds into the same space as the softtop, the mechanism is triggered automatically with a toggle switch in the center console. Hold it down and the hard top retreats between the flying buttresses – out of sight – in just 12 seconds at speeds of up to 7 miles per hour.

Below the hardtop, the RF changes little from the popular fourth-generation MX-5 (other than gaining a new color called “Machine Gray”) that has received rave reviews from the motoring press. In the US, the RF will sport Mazda’s “SKYACTIV” 2.0-liter engine pushing out 155 horsepower. Automobile magazine named the car one of its “2016 Automobile All-Stars” Tuesday – the latest in a string of baubles that includes finalist for 2016 North American Car of the Year and a spot in Car & Driver’s Ten Best List.

Since Mazda introduced the hardtop option in 2005, it has made up a healthy 50 percent of sales. Why fix what ain’t broken?

Just as the Gen-4 design gave the MX-5 an edgier 21st-century look that distanced the car from its retro-Lotus Elan origins, the RF looks to break hardtop convention. 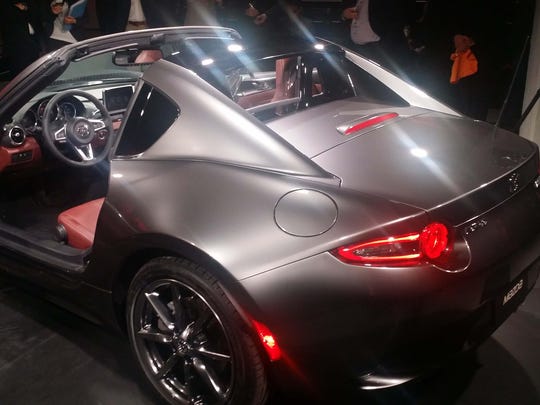 Kelly Blue Book Managing Editor Matt Lorenzo says the RF is just what the market is looking for. “Styling is very important in this segment,” says the former Road & Track editor. “It gives the Miata a more mature look by picking up some Italian attitude.”

Though Mazda won’t release pricing until later this year, Brinley conjectures that the dramatically different RF might allow Mazda to fetch higher prices for the hardtop – increasing margins in a segment with stable sales numbers.

Henry Payne is auto critic for The Detroit News. Reach him at hpayne@detroitnews.com. Or Twitter: @HenryEPayne