Code words like ‘acoustic software’ were used to hide cheating 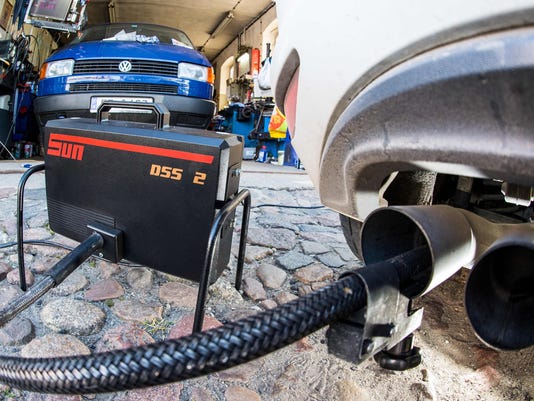 A measuring tube sticks in the exhaust pipe of a Volkswagen Golf 2,0 TDI car during an emissions test. Volkswagen AG investigators are struggling to make headway through data that makes use of dozens of code words, including “acoustic software,” for the illicit technology Volkswagen used to turn off pollution controls when cars were on the road.(Photo: Patrick Pleul / AFP/Getty Images file photo)

Volkswagen AG investigators are struggling to make headway through data secured from more than 1,500 laptops and other devices and probably won’t have a complete report on the carmaker’s emissions cheating by month’s end, say people familiar with the status of the investigation.

The probe, which was expected to wrap up by the end of April, has been slowed by the use of dozens of code words, including “acoustic software,” for the illicit technology Volkswagen used to turn off pollution controls when cars were on the road, said the people, who asked not to be identified because the investigation is confidential. The obfuscation along with partly insufficient and outdated computer systems made it difficult to find evidence concrete enough to hold individual employees accountable, they said.

“We’re in consultations regarding the clarification of the diesel issues,” Volkswagen said in an emailed statement. “We’ll comment in the second half of April.”

Nearly every step of VW’s efforts to recover from the cheating scandal has taken more time than expected. The company pushed back its reporting date for last year’s earnings, delayed its shareholders’ meeting and sought a month’s extension on a court deadline for negotiating a solution for rigged cars in the U.S. Most of the 11 million tainted cars are still on the road after a sluggish start to a recall in Europe and as talks in the U.S. remain unresolved.

“Further delays, not higher costs, are the real bear case” for Volkswagen, Stuart Pearson, a London-based analyst with Exane BNP Paribas, said in a note Tuesday. “With deadlines fast approaching, we believe investors would tolerate’ costs of up to $22.7 billion to 25 billion euros just to put the issue behind VW.”

In addition to explaining the roots of the crisis, the carmaker needs to hammer out a settlement with U.S. authorities before a court hearing in San Francisco on Thursday. Meanwhile, at a crucial meeting on Friday, the supervisory board plans to discuss the state of investigations, VW’s controversial bonus payments and the anticipated financial hit from the emissions crisis.

Vague and incomplete answers on the origins of the manipulations would sharpen criticism of the company’s handling of the crisis at a time when regulators are deliberating over fines and criminal investigations and civil lawsuits are proceeding. The U.K. plans to publish the results of its probe into emissions testing “shortly,” Helen Bower, spokeswoman for Prime Minister David Cameron, told reporters Tuesday.

Stephan Weil, the prime minister of the German state of Lower Saxony, the company’s second-largest shareholder, had called for a “complete clarification” by this month on how the cheating originated. Volkswagen will hold a press conference to discuss last year’s earnings on April 28 and also plans to report the latest findings of the investigation by then.

The carmaker has insisted that a small group of people were responsible for the so-called defeat device and that senior management was unaware of the scope of the issue until shortly before it became public on Sept. 18. Former CEO Martin Winterkorn probably missed warning signs including a May 2014 memo, according to a Volkswagen statement last month.