The front bumper-radiator-fan unit is now installed last as one module in the 2017 Honda CR-V. Henry Payne, The Detroit News
Fullscreen 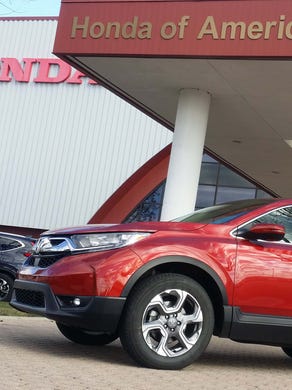 The 2017 Honda CR-V gets more rear passenger room thanks to a longer wheelbase. Henry Payne, The Detroit News
Fullscreen

Produced at East Liberty since 2006, the Honda CR-V is the best-selling SUV in America with over 345,000 units sold in 2015. Henry Payne, The Detroit News
Fullscreen

Some of the new weld shop's 200 robots fuse the new CR-V body shell together on this line. Henry Payne, The Detroit News
Fullscreen

The Honda CR-V launch marks the first time that Honda’s U.S. plant has been the lead in CR-V global production. An engineering team coordinates the international launch from inside the plant. Henry Payne, The Detroit News
Fullscreen 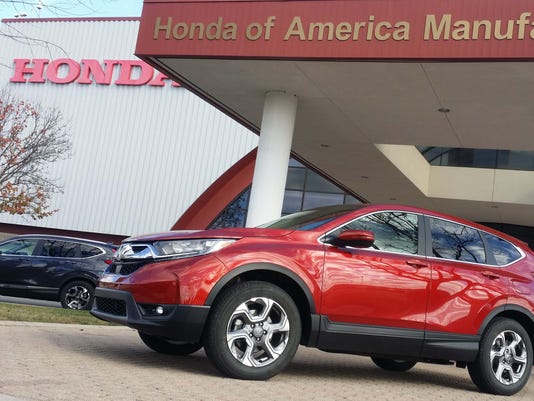 East Liberty, Ohio — After a major expansion of its auto assembly plant here northwest of Columbus, Honda rolled out the first copies of its all-new, 2017 CR-V on Monday night. The best-selling crossover in crossover-crazy America, the CR-V sold a record 345,647 units in 2015.

The launch marks the first time that Honda’s U.S. plant has been the lead in CR-V global production — and continues Honda’s trend to delegate more responsibility to its operations here. Global design development for the Acura NSX hybrid supercar and popular compact Civic were both directed — not from Japan — but out of Honda’s Metro Columbus research and development center.

“For Honda, the CR-V is a critical product and we have the responsibility to provide the first set of hard-tooled parts and complete body unit builds for the nine other CR-V plants around the world to follow and replicate,” said Ken Sheridan, CR-V engineering chief for the East Liberty plant.

Together with the nearby Marysville assembly plant, Performance Manufacturing Center and Ana engine plant — the biggest Honda engine facility in the world — Honda’s central Ohio footprint has evolved into one of the epicenters of American car manufacturing.

The CR-V will also be built in North America in Greensburg, Indiana, and Alliston, Ontario. It hits dealer showrooms this winter.

But East Liberty’s 200,000-square-foot welding shop remake guarantees much more than CR-Vs. The sprawling plant, discretely located next to wood-lined farm fields off U.S. Route 33, is now one of the most flexible in North America. It allows Honda to produce everything from compact sedans to luxury SUVs. In addition to the CR-V, the Civic and Acura compact RDX and mid-size MDX crossovers can all be made here. The three-row MDX, currently produced only in Alabama, will begin production in East Liberty next year.

With the CR-V and its sister vehicles in full production, East Liberty can produce a staggering 240,000 vehicles a year.

“It’s apparent Honda is enhancing its flexibility in order to adapt to U.S. market demand,” said auto analyst and Society of Automotive Engineers Editorial Director Bill Visnic at the CR-V’s launch. “They are essentially saying they can build almost any Honda model in this plant if they need to do so.”

The Tokyo-based company has always designed its manufacturing for better flexibility, says Visnic, and it is bringing that trademark to the heart of the American market.

The 2017 CR-V itself was redesigned both as a better vehicle — and with more efficient manufacturing in mind. The SUV’s frame is lighter for better fuel efficiency with a longer wheelbase to better accommodate rear seat passengers — and its front grill and bumper are now a signal, modular piece for more efficient assembly.

The modular front end, produced by a supplier outside the East Liberty plant, allows for plant space savings and easier access to the engine bay for plant associates. Without the bumper and radiator in the way, plant workers can now work faster inside the engine bay – only attaching the front module at the end of the assembly process.

The CR-V’s modular design and East Liberty’s flexibility are a harbinger for other facilities.

The 2.8 million square-foot East Liberty facility employs 2,350 workers in two shifts, producing 950 vehicles a day. Its last major redo was in 2006 when the Civic move to new production digs in Indiana and the CR-V was brought in. East Liberty now exports CR-Vs to multiple countries including Saudi Arabia, Korea and Russia.

Just one exit away on Route 33, Honda’s 4 million-square foot Marysville plant churns out the Honda Accord — America’s best-selling retail sedan — and the Acura ILX and TLX, the luxury brand’s top-selling sedan. In its shadow is the smaller Performance Manufacturing Center, opened this spring, where the $160,000 NSX is made.

All told, Honda’s northwest Columbus empire employs 8,100 people over 8,000 acres, pumping out 680,000 vehicles a year. Another 3,900 work at the nearby engine plant in Anna and the transmission facilities in Russells Point.