At BMW AG’s annual presentation results in March, head of production Oliver Zipse was unfazed by Brexit — then looming just nine days later — and the future of the carmaker’s iconic Mini model, unlike industry peers. Things would have to get a great deal worse than the tariffs anticipated by the company to challenge BMW’s U.K. production sites, he said. 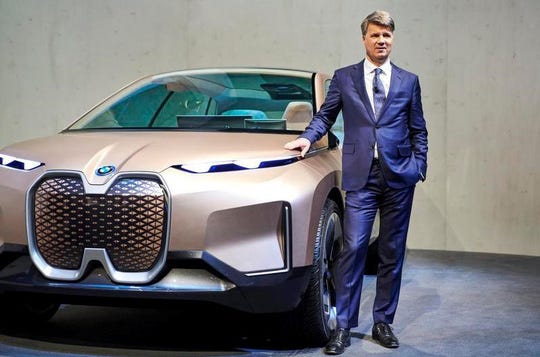 It’s the kind of steeliness and conviction, also revealed when quizzed about U.S. President Donald Trump plans to hit Mexico with tariffs just as BMW built a plant there, that probably got Zipse named Friday as BMW’s new CEO. Often speaking with a half smile, the 55-year-old BMW lifer is taking over the world’s second-biggest luxury carmaker to reinject momentum into a company that’s gone from being a leader in the transition to electric cars to a company searching for direction.

Zipse’s confidence and powers of persuasion, evident from his patient explanations with painstaking detail to reporters, will be in demand after predecessor Harald Krueger’s wavering on big decisions produced unhelpful divisions on BMW’s management board.

While BMW has ceded the mantle of electric innovator to Tesla Inc., Zipse inherits a company with the building blocks to craft a future as the automotive rule book is being rewritten. Under Krueger — and Zipse as head of production — BMW started a record product rollout designed to deliver the profits necessary to pay for the electric and self-driving revolution, to make models like the X7 SUV and sporty 8-Series coupe.

“A lot is on the table,” Credit Suisse analyst Daniel Schwarz said in a note. “Despite this, it looks like a good time to become CEO. BMW generates cash flow despite trough margins.”

Trade tensions and slowing markets have capped the results of that effort, but BMW’s sales this year are still leading rivals, gaining 1.6% during the first half, compared with declines of 4.6% at Mercedes-Benz and 5.8% at Audi. Zipse will succeed 53-year-old Krueger, who’s stepped down after just one four-year term following struggles to set a course for the German luxury-car maker, on Aug. 16, BMW said late Thursday in a statement.

“With Oliver Zipse, a decisive strategic and analytical leader will” become CEO, Chairman Norbert Reithofer said. “He will provide the BMW Group with fresh momentum in shaping the mobility of the future.”

Munich-based BMW is continuing a tradition of plucking leaders well-versed in the detailed interplay required to assemble premium cars at scale. Reithofer, a former CEO, also served as production chief, as has Krueger.

The question is whether the skills needed to run high-precision manufacturing operations will translate into nailing changing technology and customer habits in a company built around autobahn driving thrills.

Zipse has kept a low public profile and is not well known outside of BMW, but his elevation to chief executive appears to be a prudent move by the automaker, Evercore said in a research note. “BMW opts for stability and continuity by nominating a well proven member of its management team. In a hugely volatile and unpredictable world, this might be a wise decision,” it said.

Oliver Zipse inherits a company with the building blocks to craft a future as the automotive rule book is being rewritten. (Photo: Matthias Schrader / AP)

While churning out like clockwork ever-new models like the X2 and X7 SUVs, the company has been more tentative with electric vehicles. It squandered a head-start marked by the 2013 introduction of the i3, a plug-in model built on an innovative carbon-fiber frame. Its next battery-powered cars will be variants of the Mini and BMW X3.

Even with the cautious approach, spending on vehicle development contributed to eroding profitability.

In the first quarter, BMW’s automotive division posted its first loss in a decade amid slumping car prices, fallout from trade tensions and legal provisions related to alleged collusion. In March, the company announced a $13.5 billion savings plan and said it would hold headcount steady this year.

As head of production, Zipse, a 28-year BMW veteran, has championed a manufacturing system that allows electric, hybrid and conventional cars to roll off the same line to boost flexibility amid uncertain demand. He was appointed to top management ranks in May 2015 to succeed Krueger as production chief. Prior to that, he ran product strategy and oversaw the company’s Mini factory in Oxford, England.