“It’s something I could do at a later date if I wanted to but we’re not looking at that," the president said

President Donald Trump said Monday he is not “at this moment” considering fresh tariffs on imported autos and parts from Japan that he has threatened, citing an agreement in principle with Japan on trade announced over the weekend.

“It’s one of the reasons we made the deal,” Trump said in a press conference at the conclusion of the G-7 summit in France. “It’s something I could do at a later date if I wanted to but we’re not looking at that. We just want to be treated fairly.”

The threat of steep new U.S tariffs on imported automobiles and components has loomed over the auto industry and major U.S. trading partners since the the U.S. Commerce Department in February found those imports could impair national security. Trump backed that finding in May, but delayed imposing new levies on the sector through least mid-November to allow U.S. negotiators to pursue trade deals with Japan and the European Union. 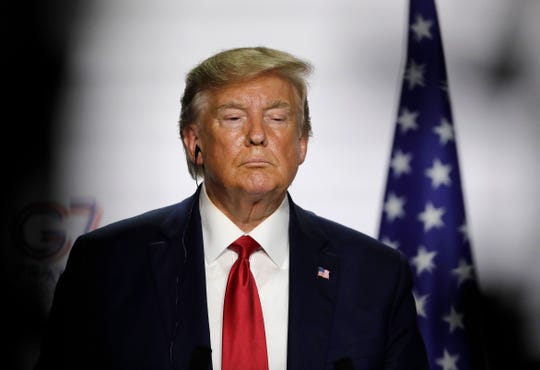 President Donald Trump listens to a question during a press conference on the third and final day of the G-7 summit in Biarritz, France Monday. (Photo: Markus Schreiber, AP)

Trump had said there would be no change to U.S. tariffs on Japanese autos after he and Japanese Prime Minister Shinzo Abe announced an agreement-in-principle over the weekend.

During the press conference Monday, Trump also said the U.S. is “very close” to reaching a trade pact with the European Union, citing the specter of additional levies of up to 25% on imported autos as a reason why.