GM going to one shift at Cadillac plant, 200 workers to transfer to Lansing Delta Township 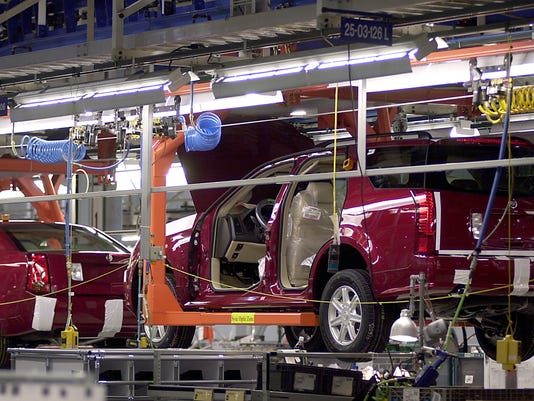 The Detroit automaker said last month it would lay off 350 workers at the plant that builds the Cadillac ATS, ATS Coupe and CTS.(Photo: Robin Buckson / The Detroit News)Buy Photo

General Motors Co. confirmed Monday it will lay off close to 450 hourly workers — about 100 more than originally announced — at its Lansing Grand River Assembly Plant as it moves to one shift early next year.

The Detroit automaker said last month it would lay off 350 workers at the plant that builds the Cadillac ATS, ATS Coupe and CTS because of lagging sales of the cars.

The company also said it would cut one of two shifts, and about 350 workers on the second shift would supplement the first shift.

GM said last month some second-shift employees would be able to move to the first shift as the line speed was increased to produce more cars on the one shift.

Employees were being notified of the additional layoffs Monday.

“We are adjusting plant production capacity to better align with market demand. Beginning in January 2015, the plant will operate on a single shift,” GM said in a statement.

“Approximately another 100 people will be impacted by the layoff. We are still working through details. Of the 350 employees that (were) already notified last month, approximately 200 of those 350 employees will transfer to (Lansing Delta Township Assembly Plant).”

The 200 workers will be eligible to transfer in January based on seniority and in accordance with the UAW contract, said GM spokeswoman Erin Davis.

The Lansing Grand River plant will begin a shutdown on Dec. 15 that’s expected to last until sometime in January.

GM would not comment specifically on the plant shutdown.

Analysts say a healthy inventory is about two to three months’ supply depending on the vehicle. Cadillac dealers have nearly six months’ supply of the ATS.

The automaker idled production for three weeks at Lansing Grand River earlier this summer to trim inventories of the ATS and CTS.

GM and Cadillac executives have said they would resort to production cuts instead of raising incentives to maintain high average sales prices on Cadillac models as they work to build the luxury brand.

Bill Rinna, senior manager of North American forecasting with LMC Automotive, said the strategy makes sense for Cadillac and GM, but only for the short-term.

“Eventually, they will need to get production more in line with demand on a more consistent basis, or increase incentives sufficiently to help move product,” he said in an email.

Sales of the compact ATS are down more than 20 percent this year through November, while sales of the midsize CTS are down 2.3 percent.

Cadillac President Johan de Nysschen told The Detroit News last month at the Los Angeles Auto Show that he is structuring the Cadillac brand for long-term success. To help with that long-term vision, he wants to tighten up supply.

“We have adjusted the production capacity by the shift change,” he said. “It may not necessarily be permanent, a time may come when we’ve gained momentum and we can reinstate it. But for now, the adjustment to production capacity is in alignment with our plans for 2015.”

Cadillac sales through November are down 5.9 percent this year, with only the newly designed Escalade SUV posting a sales increase.

The XTS has 137 days’ supply and Camaro has 152 days’ supply, according to LMC Automotive.

GM spokesman Bill Grotz said the company does not comment on production schedules but builds to market demand.

The carmaker is expected to operate its Lansing Grand River plant on one shift until production of the next-generation Chevrolet Camaro begins and the jobs would return. While GM is not commenting on when the new Camaro is expected to begin production, analysts expect the switch to happen late next year. Production is moving from Oshawa, Ontario.

The Lansing Grand River plant in November had about 1,300 hourly workers and will have about 850 in January.

GM also plans to lay off about 160 workers at its Orion Assembly Plant in Orion Township beginning in January through the end of 2015 as it cuts production. That plant, which builds the Buick Verano and Chevrolet Sonic, has about 1,750 hourly workers. Sales of some small cars have slowed as gas prices have fallen.