Flagship sedan to include new technology 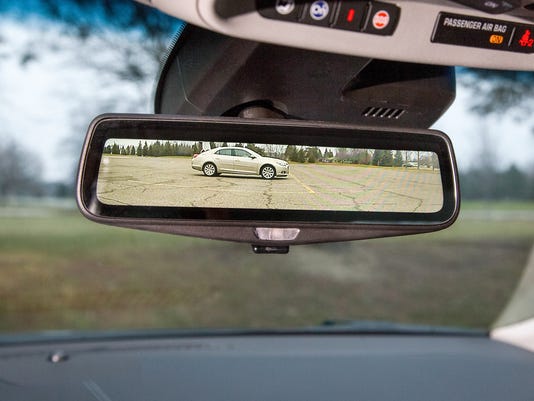 Cadillac will debut high-resolution video streaming in the rearview mirror, to expand visibility for drivers. It will be available next year on the CT6 flagship sedan.

General Motors Co. said the streaming mirror improves field of vision about four times that of a traditional rearview mirror. The technology — under development since 2011 and believed to be a first in an automaker application — will remove obstructions in a driver's field of vision, including rear seat passengers, headrests, the roof and rear pillars.

"The closest comparison to this kind of rear vision would be driving a convertible with the top down," Travis Hester, Cadillac CT6 executive chief engineer, said in a statement.

Hester, in an interview Thursday, said the system will supplement the backup camera. "We've designed this on purpose to be possible while you're driving forward," he said.

He said it be useful on the freeway. Drivers frequently see only one lane behind them and rely on side blind zone alerts when changing lanes.

"It eliminates your blind spot, which is a really comfortable way to drive," he said.

Hester said a specially designed camera lens faces rearward and works with video and image processing and software to send the crisp image to a high-resolution display on the rearview mirror. "From a customer point of view, it looks completely normal," he said.

GM said its researchers and engineers working on the technology have received 10 patents, including one for streaming video into the mirror and nine for video processing. A special coating is applied to the camera to keep it clean and maintain visibility regardless of conditions such as rain or snow. The high-definition camera also is designed to enhance the width of the rear view and low-light scenarios.

Drivers will be able to turn off the mirror's video streaming function by flipping the toggle underneath the mirror. Hester said the company is considering adding the streaming mirror to other Cadillac vehicles.

The top-of-the-range CT6 is slated to debut in the spring at the New York International Auto Show. The car will be built at GM's Detroit-Hamtramck Assembly Plant beginning late next year.