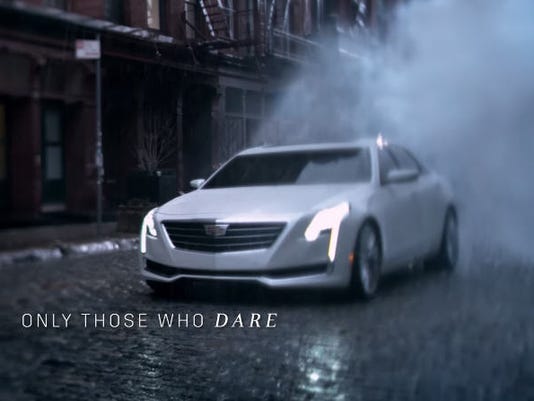 A clear shot of the large car was shown toward the end of a 60-second ad for the brand called "No Regrets," which also was posted on the brand's YouTube channel. As the car made its way down the street, "How dare a 112-year-old carmaker reinvent itself," followed by "only those who dare drive the world forward" flashed on the screen.

The ad was one of three all-new spots to air during ABC's broadcast of the Oscars.

Cadillac spokesman David Caldwell confirmed the vehicle in the commercial is the CT6, which the brand plans to officially unveil March 31 during an event in connection to the 2015 New York International Auto Show.

Cadillac has said the new vehicle will use advanced mixed-material manufacturing techniques. It goes on sale in the fourth quarter of 2015. Cadillac President Johan de Nysschen previously told The Detroit News that the advanced material mix of aluminum and steel would expand to Cadillac's entire lineup.

General Motors Co. has invested $300 million in its Detroit-Hamtramck Assembly plant to build the vehicle. GM said a new body shop with new tooling and advanced technologies — including 205 robots — has been added at Detroit-Hamtramck.

The vehicle also will have a plug-in electric option that offers "industry-leading fuel economy upwards of 70 mpg equivalent," plus tons of new technology, according to Mark Reuss, GM's, executive vice president of global product development, purchasing and supply chain.

The CT6 sneak peek comes as de Nysschen and other Cadillac executives look to reshape its image to compete against German luxury cars.

Cadillac's sales fell 6.5 percent in the U.S. last year to less than 171,000 — the only one of GM's four brands in 2014 to shrink — but Cadillac was up slightly worldwide. De Nysschen said he expected sales to be flat this year.

The new Cadillac campaign, which included a launch spot that didn't feature any Cadillac cars, is the first from Publicis Worldwide, the agency that replaced Detroit-based Lowe Campbell Ewald. Publicis is the largest agency of Paris-based Publicis Groupe. Its U.S. base is in New York.